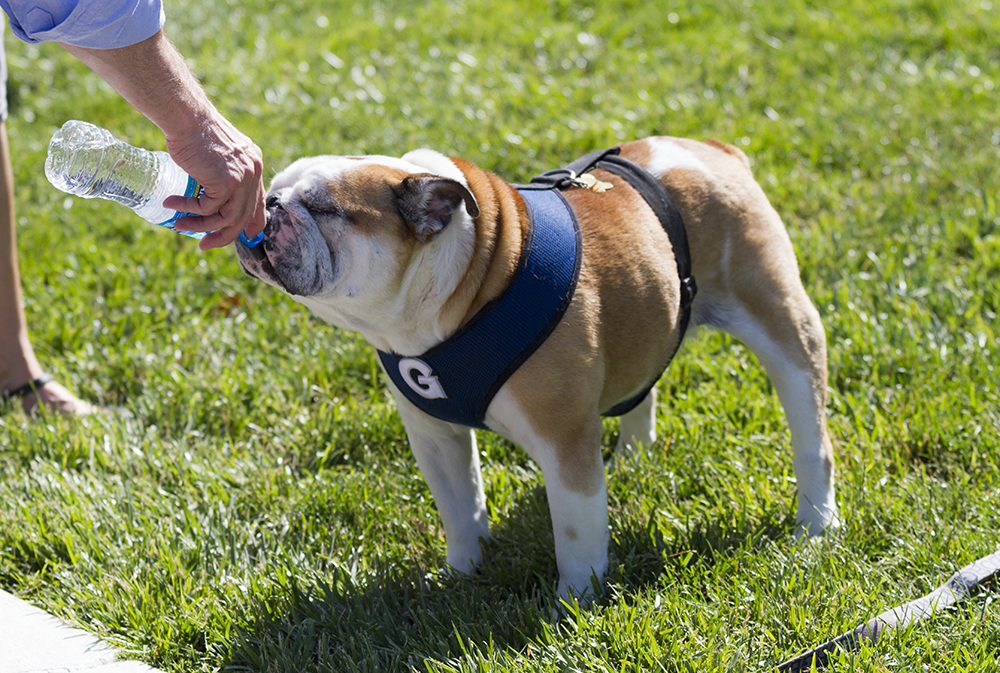 The bulldog, born June 29, was offered to the university by breeders Janice and Marcus Hochstetler, who donated J.J. last year.

The administration discussed the option of this new dog with the BAC, which Jack and J.J.’s caretaker Fr. Christopher Steck, S.J., formed late last year before any word of J.J.’s removal, through a conference call earlier this week. The collaborative decision came after a strong student and alumni response to the unclear process leading up to the university’s decision to remove J.J. this summer and Steck’s August op-ed in The Hoya calling for the administration to incorporate the committee in future mascot decisions.

“It was very sensitive. They kept coming back to us to ask what the right decisions were to make,” said Georgetown University Student Association Vice President Adam Ramadan (SFS ’14), who sits on the BAC and is a student dog-walker for the Jack Crew. “Part of announcing it today was making sure people know what’s happening this time.”

Director of Media Relations Rachel Pugh emphasized that the BAC was responsible for the final decision to pursue the opportunity to bring another bulldog to campus as well as the time-sensitive nature of the decision.

“There’s this tiny window where we had this opportunity, but we needed to decide now if we wanted to pursue it,” Pugh said.

Details about the dog’s arrival on campus, such as a prospective timeline or nickname for the future mascot, have not yet been set, but BAC members hope that the lessons learned from J.J., whose departure stemmed partly from an incident in which he bit a child last fall, will ensure a smooth process with the new bulldog.

“A lot of the things that happened that led directly to J.J.’s departure — the incident — it’s an accident. It’s something you can’t predict,” said BAC faculty representative Diana Owen, an associate professor in the Culture, Communication and Technology program. “After having the BAC and the lessons we’ve learned from the way this was handled, I’m very hopeful that there will be a more transparent process going forward.”

“The concerns with J.J. were kind of isolated to him specifically and not a general trend. This is the only one that’s caused an issue like this,” Fiorica said. “While obviously concerns are there and we’re extra careful now, I don’t think there’s any worry it’ll be the exact same thing all over again because we kind of learned from the past.”

J.J. is now living with a family with experience raising bulldogs close to campus — a move that is still questionable to some and that BAC members hope will inform future decisions.

“I personally had tremendous problems with the way J.J.’s dismissal was handled,” Owen said. “Was it the right decision? I don’t know. But I think right now, J.J.’s in a happy place and we have a new puppy and we’re on the way to having this more open process.”

Owen said that this summer’s events prompted a larger discussion of the mascot tradition and theBAC’s role.

“Sometimes it takes a really big, blown-up incident like this to make people aware of a larger issue,” she said.