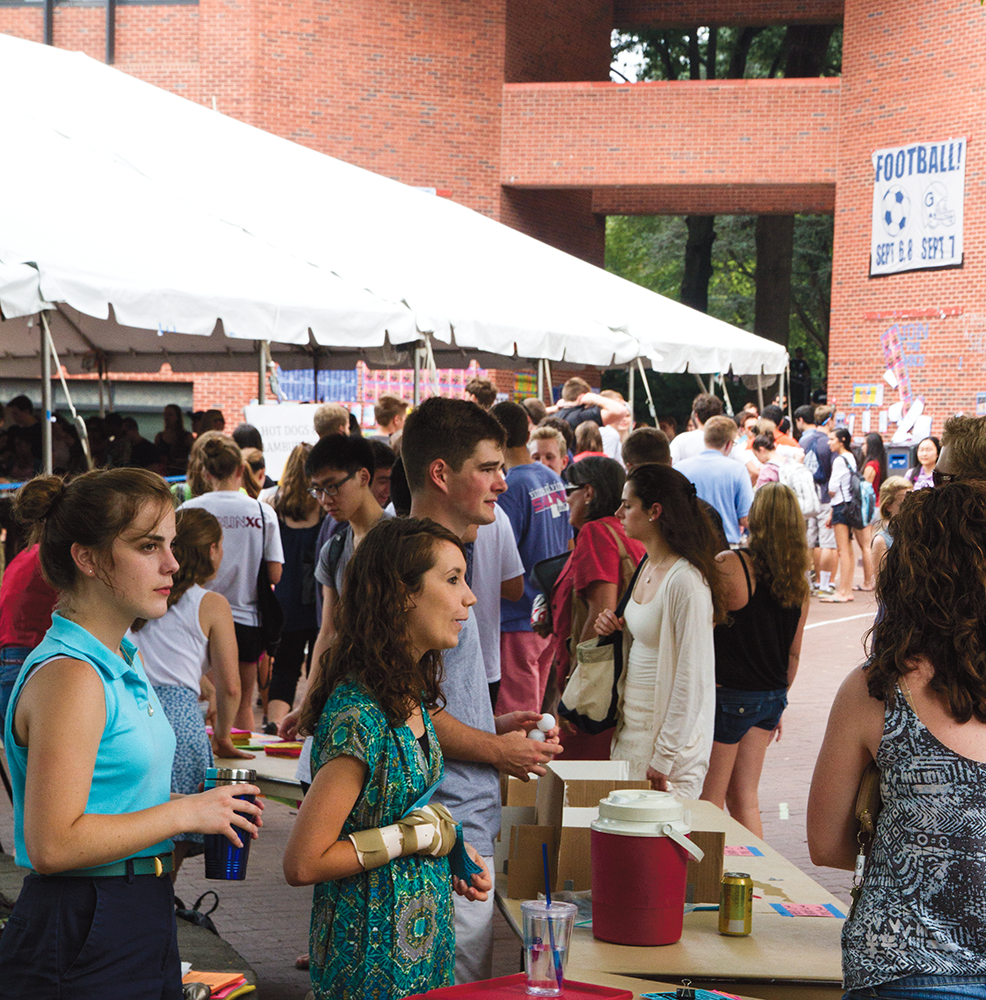 As of Thursday night, the petition had received over 150 student and faculty signatures, according to H*yas for Choice President Abby Grace (SFS ’16), who is also a member of HUFS. The petition will remain active for two weeks before the group sends it to Olson.

HUFS, which was formed to create this petition, involves around 30 students from a variety of campus groups, including but not limited to H*yas for Choice, Georgetown Solidarity Committee, GU Pride and GU Fossil Free. A number of unaffiliated students are also involved in HUFS.

According to a release from HUFS that accompanied the petition Wednesday night, the petition was created in response to oppression of free speech on campus. The press release cited the Georgetown University Police Department’s removal of H*yas for Choice from a public sidewalk outside of the university’s front gates on 37th and O streets on Sept. 22 as they held a peaceful protest of the university’s bestowment of an honorary degree upon Donald Cardinal Wuerl.

“In light of recent decisions made by university officials to systematically suppress substantive speech, we have decided to take concrete action to reform Georgetown’s existing Speech and Expression Policy,” the release read.

The petition states that the current Speech and Expression Policy is often ambiguously interpreted by administrators, leading to an inconsistency in implementation.

“The Speech and Expression policy’s vague language allows university officials to interpret policy in a manner that suits their immediate needs rather than applying a consistent standard; in addition, it often leaves members of the university community unsure about what rights they have,” the petition stated.

The HUFS’s petition lists seven demands for the university: eventually eliminating specified Free Speech Zones on campus, immediately expanding these zones to sidewalks in front of Healy Hall and around Healy Circle, recruiting a more diverse group of campus speakers for events, preserving and expanding safe spaces such as the LGBTQ Resource Center, Women’s Center and CMEA, creating a funding system for American Sign Language interpretation and Communication Access Real-Time captioning at events for deaf and hard-of-hearing community members, removing tables used by student groups from the list of “permanent structures” in the Speech and Expression Policy and creating new academic courses that highlight underrepresented viewpoints on campus.

Under the university’s current Speech and Expression Policy, students can only set up tables in designated Free Speech Zones which include Red Square, Regents Lawn, the Healey Family Student Center and the lobby of the Leavey Center. Before the policy was updated in May, tabling was limited to Red Square, with the lobby of the Leavey Center designated as an alternative spot to table during poor weather conditions.

“As a member of H*yas for Choice who has experienced active speech suppression during my short time at Georgetown, I wanted to see more students standing up for substantive speech on campus,” DeLaurentis wrote in an email.

According to DeLaurentis, HUFS hopes to inspire change in the Speech and Expression Policy as well as in the culture on campus.

“The first is to have the demands in our petition, which are essential for free and substantive speech, met by university officials,” DeLaurentis wrote. “The second is to foster a culture, both among university officials and the student body that truly seeks to celebrate free and open dialogue, rather than repressing or tolerating student expression.”

According to DeLaurentis, whether or not HUFS takes future action will depend upon the university’s response to the petition.

Olson said he learned of the petition Thursday and hopes to work with students to develop solutions.

“It looks like many of these topics have been discussed in some depth, or will be discussed soon, in our Speech and Expression Committee, our ongoing diversity work with students and the recently launched Disability Justice Working Group,” Olson wrote in an email. “I look forward to continued engagement with students on these important topics.”

Georgetown University Student Association Vice President Omika Jikaria (SFS ’15) said that although GUSA was not involved in the creation of HUFS, it supports the group’s actions.

“It shows that there still is some work that needs to be done, and it’s great that students are coming together to address it,” Jikaria said. “I really think it shows the administration that there are steps that need to be taken.”