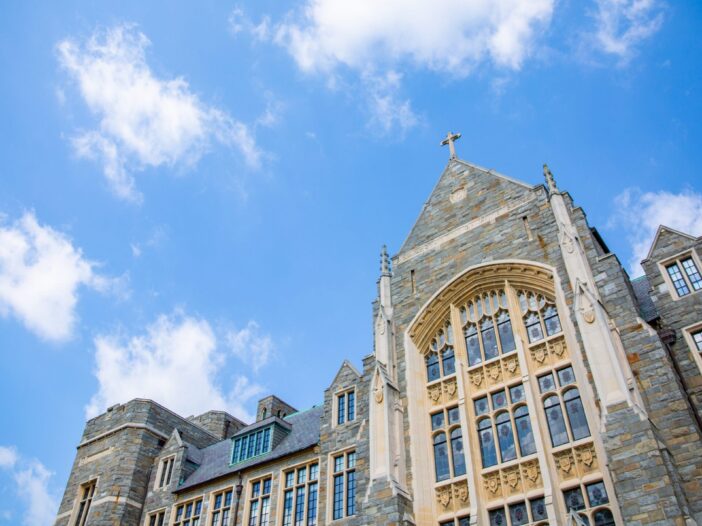 Georgetown College and the McDonough School of Business (MSB) launched a new joint Bachelor of Science in International Business, Language and Culture (IBLC).

The joint degree program, which was formally approved in April, was announced Oct. 11 and is now available to students. The IBLC program focuses on the intersection between business and culture, borrowing coursework from both the MSB’s program in international business and the College’s faculty of language and linguistics.

Students can apply to the joint degree program at the end of their first year at Georgetown, beginning with the class of 2026 and beyond. Students from both the MSB and College are eligible to attain the degree, which is managed by a collaborative committee with members from both schools.

The program is comprised of a total of around 120 credits, with 30 to 36 credits in the modified international business curriculum and 24 to 40 credits in the language and culture curriculum. Given the rigorous requirements, students will not be allowed to pursue a second major in another field. The degree also includes 30 to 36 credits of integrated core classes as well as a culminating capstone course.

According to Tad Howard, Georgetown College chief of staff and associate dean, the program was inspired by the desire to explore the crossover between business and language.

“Our thinking started with the longstanding collaborations between the College’s language departments and the MSB, which provided language majors opportunities to complete formal business programs,” Howard wrote to The Hoya. “We wanted to build on that history to create something even more integrated and immersive.”

Donatella Melucci, who will serve as faculty co-director of the IBLC joint degree program on the College side, said the program will importantly allow business students to become confident in their foreign language skills and be able to conduct businesses across the globe.

“We are trying to provide the kind of integrative education in language and business so students learning the language and being familiar with the customs of each country, and therefore, the culture, would be more competent,” Melucci said to The Hoya.

According to John Cui, who will serve as faculty co-director of the program on the MSB side, the program represents a joint effort on behalf of the College and the MSB to provide Georgetown students with opportunities that reflect the university’s educational mission.

“Both schools have put a lot of thought and a lot of effort into developing this program,” Cui told The Hoya. “Georgetown students are awesome, and we want to diversify the opportunities that we have for them.”

The newly launched IBLC program reflects Georgetown’s continued emphasis on interdisciplinary learning, becoming the school’s second business-focused joint degree program, following the creation of the Bachelor of Science in Business and Global Affairs (BSBGA) joint degree program with the School of Foreign Service (SFS) in 2019, which was created to meet the desire for programs that bridge the gap between schools at Georgetown.

IBLC differentiates itself from the MSB’s business programs because of its emphasis on language and culture, Howard said.

“That emphasis is not just about the number of language courses, but the way those courses and the Core curriculum itself are interwoven with the business curriculum,” Howard said. “The result, we expect, is a rigorous and rewarding degree that emphasizes the humanistic and cultural dimensions of business decisions, and the importance of linguistic competency in the business sector overall.”

The program will allow the university to empower students to take their skills in language and business into the world, Cui said.