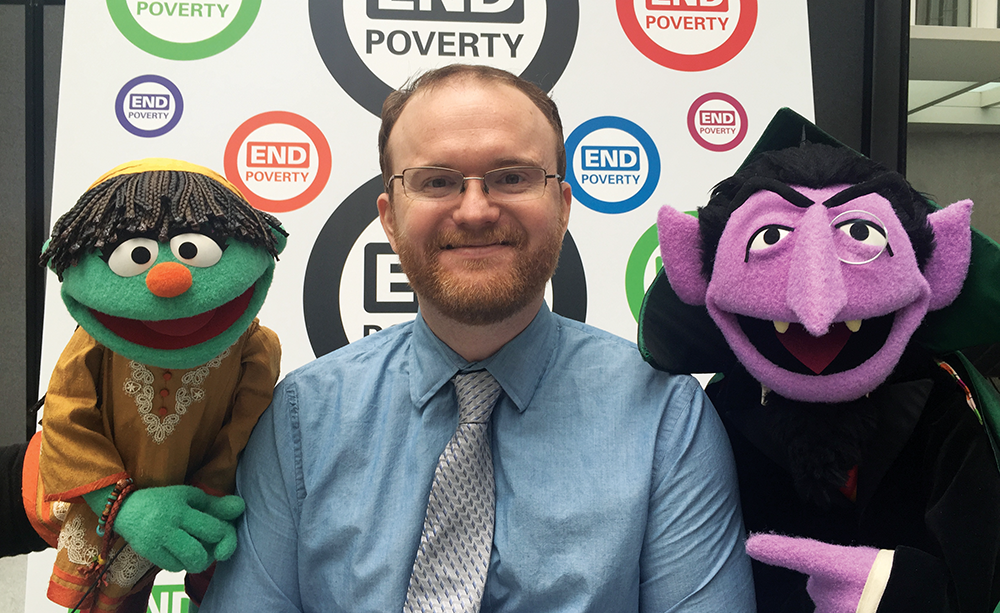 From the outset, James Sullivan’s (COL ’03) study abroad experience his junior year did not go according to plan. Scheduled to depart for Villa Le Balze, Georgetown’s study center in Florence, on Sept. 11, 2001, Sullivan’s trip was delayed amid the tumult of terrorist attacks in New York City and Washington, D.C.

Undeterred, Sullivan flew to Florence a week later, and immediately fell in love with the city. Enthralled by his immersion in Italian culture and the study of the Renaissance, Sullivan opted to extend his stay at the Villa for another semester. 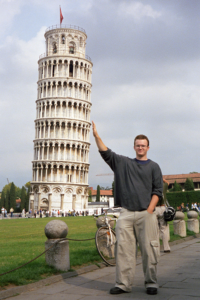 That spring semester forever altered Sullivan’s life. In February 2002, on a weekend skiing and snowboarding excursion to the Italian Alps, he suffered an accident that permanently cost him the use of his legs.

Sullivan sustained a traumatic injury to his spinal cord that left two-thirds of his body paralyzed.

“If you look at my MRI, there’s a giant black hole where my spinal cord used to be, but I got patched up,” Sullivan said in an interview with The Hoya.

Now, 16 years after his injury, Sullivan is more focused on his capabilities than his limitations. As a videographer at the World Bank, Sullivan has transformed his experience into a career of travelling the globe, documenting the lives of the world’s poor and sharing their stories.

After traversing continents in his wheelchair, Sullivan still recalls the time he first began navigating his new life wheeling around campus. The accessibility changes Sullivan has observed at Georgetown are a testament to the incremental pace of progress and the challenges that remain.

The accident cut short Sullivan’s extended Italian sojourn. He travelled back to the United States for six months of outpatient rehabilitation before re-enrolling at Georgetown for the second summer session of 2002.

Back on campus, Sullivan had to reorient his college experience around the use of his wheelchair. Terrace-level housing in Village A — provided by Disability Support Services — gave him an operating radius within which he could readily adapt. But other areas, like accessing classrooms for his many art history courses in the Edmund A. Walsh Building on 36th Street, proved much more daunting. 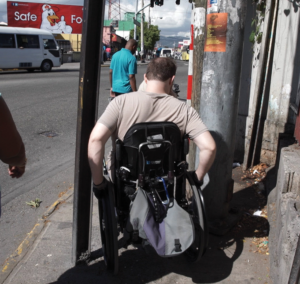 “Georgetown is formidable, man,” Sullivan said. “Concrete’s fine, but it’s the bricks. I definitely flipped myself a few times when we were going out with friends.”

Even reconfiguring routine tasks was a demanding process. Sullivan said it was years later before he perfected a method of putting on pants.
But Sullivan said he also acquired a new outlook on his situation: He viewed these obstacles as puzzles to solve.

“Being in school in a chair for the first time is good because it forced discipline on you,” Sullivan said. “So not thinking, ‘Oh God, what is this new body doing to me?’ It’s ‘Oh, I have stuff to do.’ That was a wonderful thing for me at that time as well, as being back among friends and moving toward graduation, in the sense of ‘Okay, so here’s the goal, and here’s what I have to do to get there.’”

Sullivan’s mother, Anne Sullivan, who retired as a senior associate dean in 2015 after 43 years of working in the Georgetown College Office of the Dean, said she observed that college life provided a good opportunity for reintegration after her son’s injury.

“I’ve come to see that there’s a social network, the terrain is delimited, you can study and physically accomplish the tasks of being a student,” Anne Sullivan said in an interview with The Hoya. “There was the grief of getting around buildings, and I’m sure James can tell you it’s not the easiest campus to navigate, but it was a good next thing.”

James Sullivan has visited Georgetown as recently as December, when he stopped by campus to take a Japanese language proficiency test. He noted how the campus has transformed since his time as a student, with changes such as the construction of Regents Hall in 2012, which now provides easier access to the Leavey Center from the Intercultural Center and Red Square.

The pace of improvement has been incremental, but Sullivan said it is evident that progress is being made despite the challenges of Georgetown’s hilly, historic campus. But he said such progress could not have been possible without the work of disability rights advocates who 30 years ago fought for accessibility requirements and reasonable accommodations under the Americans with Disabilities Act of 1990.

“Here’s the thing: I have come in with a disability after the ADA has been passed. That didn’t happen on day one,” Sullivan said. “And that’s why I think a large part of why I’ve been able to do what I’ve wanted to do, which is graduate from college, pick a career that I want to work in and then work in it. I don’t think we can underestimate how powerful that is.” 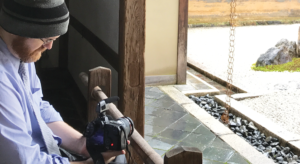 A Flair for Film

Sullivan said he had been exposed to filmmaking early in his life. His father, Bob Sullivan, was a freelance filmmaker who had previously worked with National Geographic as a camera man and sound technician. Growing up, the Sullivans had a darkroom in their basement.

He knew he was a creative person, but he realized he yearned to take complicated concepts and render them into something intelligible while wrestling with academic writing during his studies. Video editing seemed like a natural fit – a chance to explore the humanity of his subjects.

“All you have to do is show up, ask the right questions and you’re gold,” Sullivan said. “Being able to linguistically put together the right question and using their words to tell their story is different from just sitting there and cranking out a script.”

Sullivan graduated in December 2003 with a bachelor’s degree in history, just one semester later than he originally intended before his accident. It was then that he began an internship at the Arlington-based Henniger Media Services and absorbed the skills he needed to launch his career in video editing, before serving as an assistant editor for HGTV and an online editor for a production company created by former executives at the Discovery Channel.

In 2011, Sullivan got his big break: He was hired by the World Bank, where he now serves as an editor and motion graphics artist.
The World Bank, which provides financial and technical assistance to developing countries through capital projects, aims to reduce poverty and promote global development.

One of the World Bank’s key messages is disability inclusion, as it works to mitigate the adverse socioeconomic outcomes experienced disproportionately by the 15 percent of the world’s population who have some form of disability.

Sullivan said his own experiences with his disability have made his job at the World Bank all the more fulfilling.

“Having been through rehabilitation and my own struggles, having the chance to talk for somebody else who has no voice is amazing. The bank functions as they’re sitting on like 5,000 Ph.D.s, so it’s this very A-level, elitist institution, yet at the same time the problems they’re trying to solve are for literally the people on the bottom,” Sullivan said. “That’s amazing, and I don’t think that everybody gets a chance to do that in their job.”

Among Sullivan’s projects at the World Bank was “Wheeling Through Kingston,” a video in which he travelled to Jamaica to witness firsthand what it was like to be disabled in a developing country, where streets, sidewalks and buildings often provide rough terrain for the physically disabled.

But in other countries, he marvelled at the way accessibility was embedded into the everyday infrastructure of the city. During his trip to Japan, Sullivan was fascinated by the fact that even the handrails at his hotel in Kyoto included Braille messages indicating where the rails led.

Still, Sullivan recognizes that one of the additional challenges confronting individuals with disabilities is that the disabled community is not monolithic, but rather populated with people who have all sorts of conditions.

But Sullivan said making improvements to infrastructure is not enough. To truly accommodate individuals with disabilities, society must strive to promote a sense of belonging — a key plank of the World Bank’s guiding philosophy of inclusivity.

“Trying to make things accessible is two things,” Sullivan said. “It’s the infrastructure, but then it’s also, ‘Oh, can I help you?’ It’s ‘You’re part of this.’”
Progress is slow, but Sullivan is hopeful about the potential for adapting existing systems, from mass transit to bathrooms to mainstreaming in public schools, to work better for people with disabilities worldwide.

But, at the same time, Sullivan stresses the need to shift the cultural lens. He commends the disability lectures on campus and the development of a disabilities studies program at Georgetown as strides toward this greater inclusivity.

And eventually, Sullivan hopes these conversations — on campus and beyond — can lead society to reconceive its notions of what disability means for individuals.

“My goal has always been to just be normal, and I think the definition of ‘normal’ is changing,” Sullivan said. “It’s ‘You’re human’ with this, this and this little asterisk attached to it, but there should be no judgment there.”