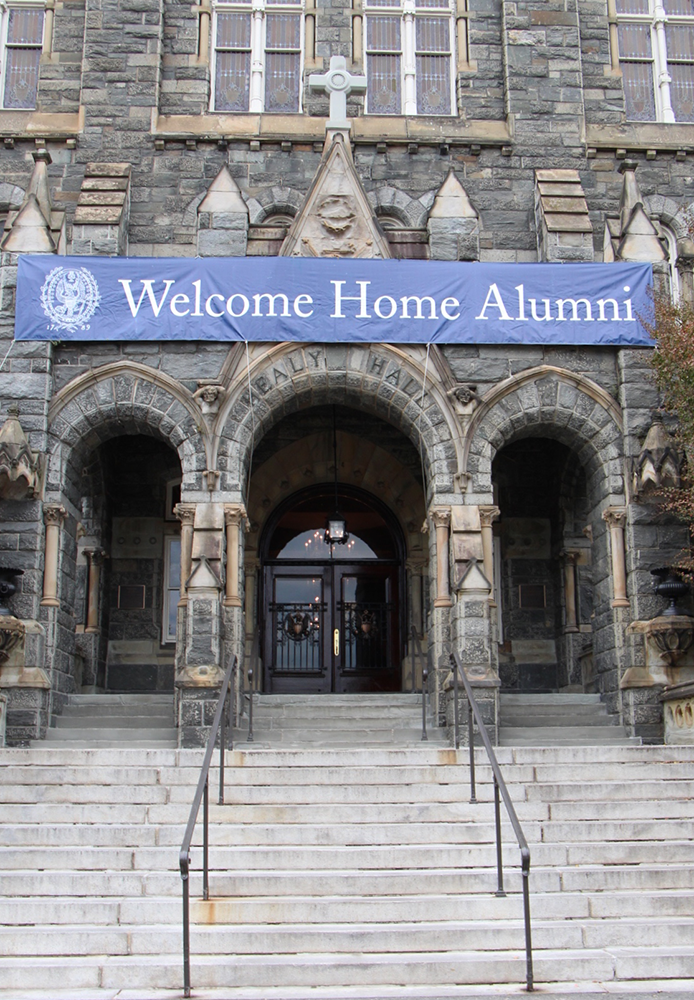 Alumni are flooding the Hilltop for Homecoming Weekend, which began Thursday, for Saturday’s Homecoming football game and tailgate, moved from its usual spot in McDonough parking lot to the lawn between Regents Hall and the Rafik B. Hariri Building because of construction for the Intercollegiate Athletic Center.

In 2013, approximately 4,000 people made the trip to campus for Homecoming, an increase from the year before. The Office of Advancement declined to comment on donations or attendees for this year ahead of the weekend.

Traditions Day today will showcase the university’s history and traditions — particularly related to student clubs — on Copley Lawn. During the day, alumni can choose to sample from six classes with university professors, with topics such as “The Audacity to Innovate: Imagination and Creativity,” “We Have a Pope!: What’s New and What’s Traditional with Pope Francis” and “An Introduction to Bioethics.”

Ahead of the main festivities, many campus organizations, including the LGBTQ Center, the Women’s Center, Georgetown University Student Association, Students of Georgetown, Inc., New Student Orientation and The Hoya, are holding open houses and receptions for alumni.

Saturday’s tailgate, starting at 11 a.m., precedes the football team’s game against Bucknell University at 2 p.m., for which tickets must be purchased separately, at $10.

The tailgate costs $15 for students and $20 for alumni, and $25 for same-day entry. For those over 21, the entry fee includes free-flowing beer.

Rodrigo Mercado (MSB ’17) said that he will not be taking part in the Homecoming Tailgate because of its high cost for students under the age of 21.

“To be honest, I have other social plans that don’t require payment and I don’t want to pay money for an event geared toward students over 21,” Mercado said.

In the new location on Regents lawn, which the Homecoming website touts as providing “greater proximity to the MultiSport Facility” and as “at the center of the most recently-developed section of campus,” ’80s cover band Reflex will accompany the festivities.

Braden McDonald (COL ’14) a recent alumnus who lives in Calgary in Alberta, Canada, will be coming to Georgetown for Homecoming weekend and said that he knows that the weekend will be worth the eight-and-a-half-hour trip.

“It was a tough decision for me to come to Homecoming and I was a little hesitant. I thought well, on one hand, it’s quite hard for me personally, and on the other hand, it looks a little bit desperate,” McDonald said. “But then I heard about people coming from Dublin and Istanbul. Clearly, this is an un-missable opportunity, and I feel like recently graduated seniors really prioritize it, so I wanted to be part of it.”

McDonald said that he is eager to reconnect with his friends and spend a weekend at his alma mater.

“I’m looking forward to reliving my Georgetown life,” McDonald said. “I’ve transplanted myself to a very new life, I miss my old life very much, and I really want to rekindle that just being surrounded by the people that I love and enjoying a weekend with them.”