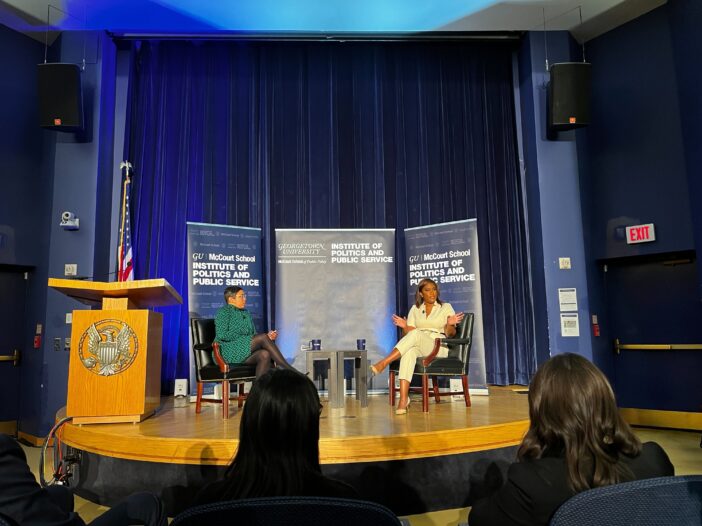 The event, titled “Know Your Power,” featured Jones and Ashley Etienne, a GU Politics Fellow and former communications director to Vice President Kamala Harris, and discussed Jones’ career journey, the difficulties women and people of color face in politics and the media, and the future of MSNBC.

Hard work and a focus on delivering tangible results even in the face of discrimination were essential to her rise to success, Jones said at the event.

Jones is the first Black woman to lead a major cable news network. She began her role as MSNBC president in February 2021 following the departure of Phil Griffin, who served as the president since 2008. Before becoming MSNBC president, she led breaking news coverage, including the 2020 election cycle, and won an Emmy for her coverage of the Supreme Court’s 2015 decision to legalize same-sex marraige.

Using power in a supportive way is critical to building an inclusive professional environment, according to Jones.

“It’s not only what your power is, but how you use it,” Jones said. “It’s also how do you transfer it to other people, how do you position yourself to be able to uplift and help other people.”

The overwhelming majority of employees in the field of journalism, including reporters, editors, photographers, broadcasters and videographers, are white and male, with 77% of newsroom staffers being non-Hispanic white individuals.

As the journalism industry continually undervalues the work of women and people of color, improving representation is vital, according to Jones.

“How do I use this platform for all of the other young women journalists who didn’t know it was possible, the students who were thinking about where do I go and hadn’t seen somebody who looked like them,” Jones said. “I didn’t see anyone who had done this job, but it didn’t mean that I thought I couldn’t do it.”

As a young reporter, Jones constantly felt underestimated and underappreciated for the work she was doing, she told Etienne.

However, despite these challenges, it was important to volunteer for every possible opportunity that arises, Jones said.

“I was always inclined to raise my hand for whatever the next new big project is,” Jones said. “It was that idea of raise your hand even if it doesn’t make sense, even if it doesn’t feel like it leads to a specific place or thing. Just always being hungry for opportunities, always being hungry for learning, and I think especially in places that take you just outside of your comfort zone or your area of expertise, because you never know where it could lead.”

Moving forward in her role at MSNBC, Jones hopes to continue to expand the network’s outreach, especially to a younger audience through more digital and streaming content.

“My vision for the network is to be the brand for everyone,” Jones said. “One of the things I’m really focused on is how we broaden how we define and how the audience defines MSNBC, because we’re a very successful channel, and I want to look for opportunities to bring those successes elsewhere.”

In 2021, the median age of MSNBC viewers was 68, an increase from 65 in 2017 and a trend shared by other cable news networks. In her first months as president, Jones immediately began to address the lack of younger viewers through increasing the use of streaming services and giving younger, rising commentators spots on prime-time.

As the network continues to expand new digital frontiers, Jones committed to bringing more voices into the conversation.

“It’s very important to me to use the platform and opportunity to help other people along the way at all different levels,” Jones said. “For me, there’s nothing more important than pay it forward.”