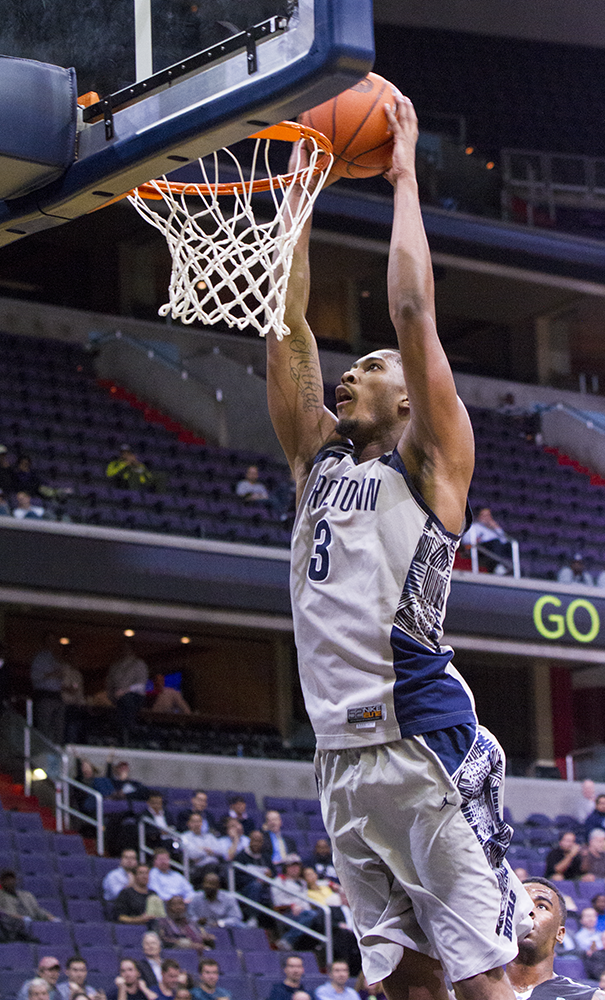 At the end of the season, it is not the Georgetown men’s basketball team’s body of work that appears on the banners proudly adorning the walls of McDonough Arena, but the marks of postseason success.

“Of course we all want to win more,” Georgetown Director of Athletics Lee Reed said. “But I think sometimes we’re victims of our own success. … It’s a broader view than just one game in March. We look at the body of work.”

Reed has a point. In the past five seasons, the Hoyas have won a Big East regular-season championship and made four NCAA tournament appearances — nothing to sneer at.

But if you take a closer look at those results, you would see teams failing to reach their potential. You would see a middling overall winning percentage of .654 since 2007. You would see talented players plagued by injury or academic ineligibility and other promising players transfer away from the Hilltop. You would see flashes of brilliance dimmed by inconsistency. Most of all, you would see the cold, undeniable fact that the Hoyas have not made it past the second round in March Madness since 2007.

This year’s squad, armed with a robust mix of seasoned veterans and highly touted rookies, may have the ability to take Georgetown deeper into the NCAA tournament. The Hoyas’ biggest assets are versatility, depth and height, but when you toss in the shooting prowess of Big East Preseason Player of the Year, junior guard D’Vauntes Smith-Rivera, the ability to drive the lane and general toughness of senior guard Jabril Trawick and the dominating low-post presence and determination of senior center Josh Smith, the Hoyas have all the ingredients of a championship team. Not to mention, the Blue and Gray can also rely on the experience of seniors Mikael Hopkins, who started all 32 games at center as a sophomore, and senior wing Aaron Bowen, whose freakish athleticism can add a spark to any game.

“Our team is unique in many ways in that we have a very veteran team,” Head Coach John Thompson III said. “Then we have a freshman group of energy and we have to mix it together. They all are going to get the opportunity to play and play right away.”

Thompson said he will mix and match the lineups in search of the best fit, but as of now claims to have “no idea” who the starting five will be for the season opener on Nov. 15, though it’s a safe bet to assume Smith-Rivera and Trawick will run the backcourt, while Smith will get the nod at starting center.

Although the rotation is still in flux, one thing is certain: No matter who is on the floor for the Hoyas, there is going to be a lot more height. Freshman forwards Paul White and Isaac Copeland, clock in at 6-feet-9-inches and 6-feet-8-inches respectively, adding length to the frontcourt and opening up the possibility of a more free-flowing offensive scheme.

This is good news to Hoya fans frustrated with the slow-developing, methodical Princeton offense that has become synonymous with Georgetown basketball. A style of play that utilizes precision passing, constant movement and back-door cuts to the rim, it has proved highly effective when executed well, but also rigid and awkward when it is not. As a slower moving scheme, it’s often employed by teams who are physically undersized in order to limit their opponent’s number of possessions.

But with the height and experience of this year’s squad, that strategy seems bound to evolve.

“[The offense] is going to move a lot faster this year,” Smith-Rivera said. “We have a great deal of versatility which we lacked last year and I think it will help us a lot.”

As for Thompson, he declined to give any specifics on how the Hoya offense could look different.

“Our offense is very creative. It changes every year,” Thompson said.

Another major offensive change is the scoring hole left by the graduation of guard Markel Starks, who averaged 17.3 points per game in his senior season. Cue Smith-Rivera.

“We need [Smith-Rivera] to score,” Thompson said. “He’s going to have the opportunity [and] burden to score a bunch of points as well as get other people involved.”

The team as a whole will have plenty of opportunities to prove itself in nonconference play, including a marquee matchup in Madison Square Garden against Indiana on Dec. 27 before the home-and-home format of Big East play kicks off Dec. 31 at Xavier.

“We play Florida in the Bahamas and we play Kansas at the Verizon Center. Those are standout nonconference games … but mostly we’re just ready for the first game,” Trawick said.

The fans are ready, too. Not just for the first game or the second, but for Georgetown basketball in March. For better or worse, Hoya fans are not lowering their expectations for postseason success — perhaps this is the year the team will rise to meet them.