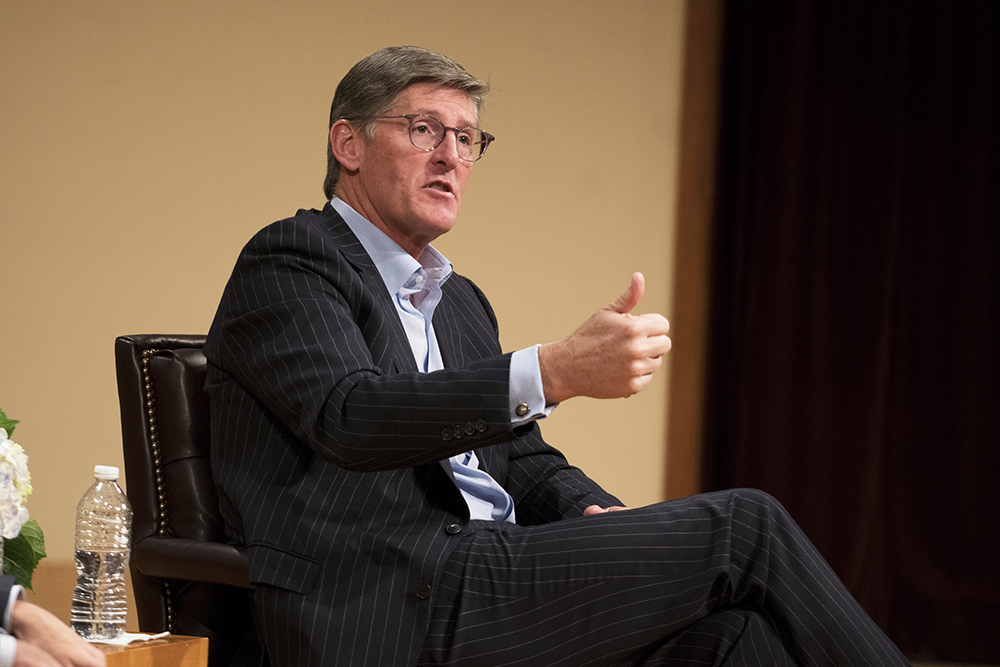 Advances in banking technology will drive the future of the financial industry, Citigroup CEO Michael Corbat said during an event at the Georgetown University McDonough School of Business on Tuesday evening.

Corbat covered a range of topics at the event, including the state of the financial industry, the industry’s future and what students should be doing to prepare themselves for careers in finance. Paul Almeida, dean of the McDonough School of Business, moderated the conversation.

The event was part of the MSB’s Stanton Distinguished Leaders Series, a lecture series aimed at bringing business and global leaders to campus to speak about the nature of leadership in their fields.

Among the topics Corbat discussed was the current instability of financial markets. Just a day before the conversation, the Dow Jones Industrial Average fell nearly 1,600 points, the largest single-day drop since June 2016, though it had recovered somewhat in the time since.

Nevertheless, Corbat said he was happy with the market, viewing the recent drop as a necessary reminder to investors that markets sometimes fall, but they are also very capable of recovering.

“What I think is very positive about the last 36 hours is it’s a great reminder that things do go down,” Corbat said. “Financial markets tend to have short memories. I think it’s a great correction.”

“You go back and look at the Dow; year over year it’s still up 20 percent,” Corbat said.

“Technology — it’s very easy to see — is changing the face of everything we do,” Corbat said. “When I really look at the application of technology today, it’s really being driven and truly benefitting our customers and clients’ lives.”

“I will say to the 58 Hoyas who are joining us: There is not a more interesting time to be in banking, because right now, we’re just at the start of truly rewriting the next chapter of banking, and technology is going to dominate that story,” Corbat said.

Adam Shinbrot (COL ’18), one of the 58 students planning to work at Citigroup after graduation this year and an attendee of the event, emphasized how technology will continue to transform the banking industry.

Corbat also addressed possible disruptions to the financial industry moving forward, stressing that problems would likely be driven by “geopolitical challenges” rather than challenges stemming from the financial system, as they have in the past.

However, Corbat also emphasized that past political problems had largely not affected the positive trends of financial markets in the United States and that overreactions to potential geopolitical problems are dangerous.

“We’ve just come out of a year where we had 12 uninterrupted months of month-over-month gains: the first time I believe in the history of the stock market,” Corbat said. “That happened against a backdrop of some pretty interesting things in North Korea, some challenges in the Middle East, some questions in the U.S.”

Andrew Kaplan (SFS ’21), who attended the event, said Corbat’s emphasis on the possible disruptions to the economy resonated with him.

“It was really interesting that [Corbat] thinks the next downturn in the economic-business cycle will be based on a geopolitical event of some kind,” Kaplan said. “There are so many indicators in the economy that indicate that earnings are good, wages are fine, world economies are optimistic, but … it could actually be a geopolitical crisis that switches things.”

Corbat ended his talk with advice to Georgetown students looking to enter the financial industry, highlighting the importance of being open to a change in career goals.

“You probably have very specific things or very specific jobs that you ultimately want to get to,” Corbat said. “Fight that urge for now. Whether you’re undergrad or graduate, build your foundation, because your life and your career will very naturally narrow, and those of you that have the best foundation will have the most flexibility in your careers.”