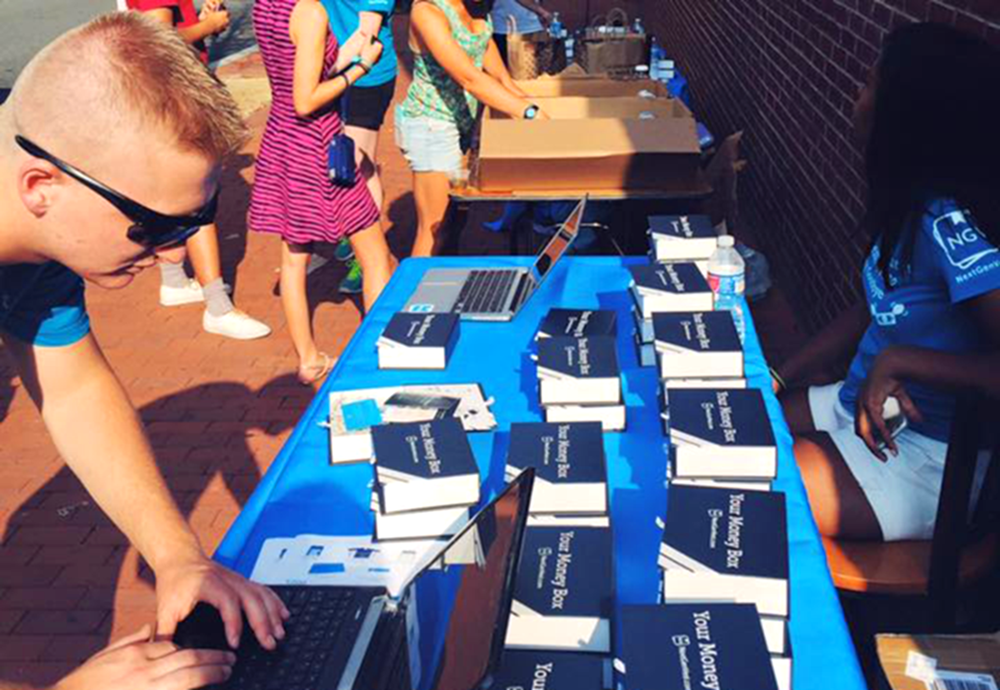 As hundreds of freshmen made their way through Georgetown’s front gates for New Student Orientation this year, they were greeted not only by orientation advisors, but also by representatives from NextGenVest, a New York-based startup that promotes financial literacy.

NextGenVest was started by Harvard graduate Kelly Peeler with the aim of educating the next generation of adults about money management. After interning at the company, Greg Herrigel (COL ’16) inaugurated a NextGenVest chapter at Georgetown last month.

NextGenVest and its website nextgenvest.com will serve as a money mentor to members, giving them discounts and money advice, such as how to sign up for work-study or how to find good deals at local restaurants.

Students can sign up for a free online membership, which gives them access to various videos teaching financial know-how or sign up for a $25 membership that offers Georgetown-specific money advice and discounts at local businesses.

“On the whole, we want to make the process of dealing with and learning about money suck less for students so they can get back to enjoying college,” Peeler wrote in an email to The Hoya.
Despite NextGenVest’s recent expansion to Georgetown, the program was able to recruit several student volunteers before the year began.

Frankie Collantes (COL ’17), the Director of Partnerships for NextGenVest Georgetown, got involved after speaking to Herrigel about the company over the summer. (Full disclosure: Frankie Collantes served on The Hoya’s editorial board last year.)

Georgetown students received their training over the summer and chapter members also received free Chipotle, one of several companies partnering with NextGenVest Georgetown.

NextGenVest currently includes college chapters at Columbia University, Harvard University, Princeton University, Duke University, Wake Forest University, the University of Connecticut and University of Denver. Peeler said she hopes to recruit as many Georgetown students as possible through incentive campaigns. During move-in weekend, the company awarded a $1,000 scholarship to a random new NextGenVest member. Peeler declined to comment on the exact number of students signed up for NextGenVest in the two weeks since the recruitment push, but she did say the number was high. Stephen Yin (SFS ’17), the winner of NextGenVest’s $1,000 scholarship, said he heard of the company when he was on his way to Wisemiller’s and signed up because of the opportunity to win money.

“I signed up because there was little risk and potential to benefit,” Yin said. “The potential to win money to pay off tuition, I think, would sound appealing to any student.” After winning the $1,000, Yin said that he plans on getting more involved in NextGenVest’s mission and will attend a conference in D.C. this month hosted by the company.

Herrigel said he is proud of the progress NextGenVest has had on Georgetown’s campus so far.

“I think NextGenVest is making great strides toward helping students of all backgrounds achieve financial literacy in an easy and affordable way,” Herrigel said. “The great thing about this company is that they understand where we are coming from as students, and they just want to make our lives a little easier.”

“Now that we have a newly established chapter, we really just want to continue to expand on campus and inform people about all of the free financial literacy resources we have available,” Collantes said.