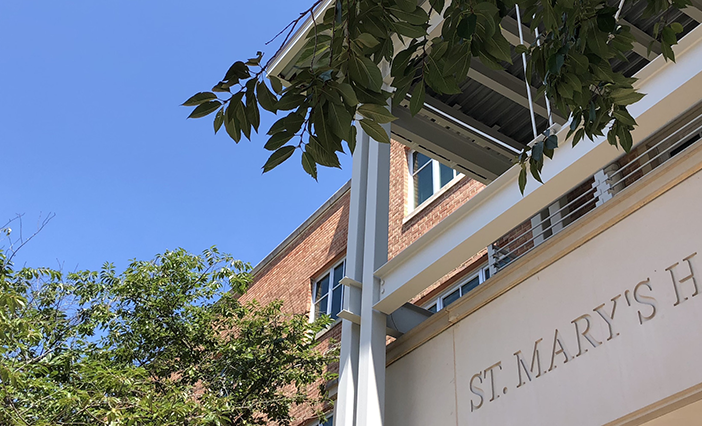 Under the guidance of the Health and Health Sciences Strategy Initiative, a committee identifying the future direction of health sciences at Georgetown, the university has decided to create two distinct schools, with a planned formal launch date of July 2022.

The decision to divide the NHS into the GSN and GSH came after reflecting on the principal goals of both the nursing and health studies programs and deciding their respective purposes would be better suited by two separate programs, according to University President John J. DeGioia (CAS ’79, GRD ’95).

“The formation of these two new schools will allow us to unlock new potential and achieve our ambitions in these disciplines,” DeGioia wrote in a Dec. 7 email announcement to the Georgetown community. “We recognized our ambitions for research and education in nursing and health could be strengthened by the creation of two distinct schools, providing space for growth within the focal point of each school, while fostering interdisciplinary and cross-school collaboration.”

Founded in 1903 as the School of Nursing, the NHS added “health studies” to its official name in 2000 to reflect the addition of three health-related academic programs. The NHS houses the global health, health care management and policy, human science and nursing majors.

The split into two schools will better organize the increasingly relevant study of health policy in world affairs at Georgetown, according to Neehar Mahidadia (NHS ’21), a senior representative on the NHS Academic Council.

“The need to redefine the scope of the NHS, to promote broader interaction with the Georgetown healthcare community makes this the right decision from an organizational and admissions standpoint,” Mahidadia wrote in a statement to The Hoya. “With healthcare being one of the greatest challenges facing the world, it is exciting to see Georgetown double down on its commitment to advance this field that has a history of promoting service for others.”

The necessity of a dedicated school of health has become even more apparent in the midst of a pandemic, according to NHS Interim Dean Carole Roan Gresenz, who helped develop the new plan and will oversee the split.

“Our work on the HSSI began in 2019, prior to COVID-19, and fortuitously positioned Georgetown for adapting to the dramatic consequences of the pandemic, which has underscored the interdependence of our nation’s health with the health of nations globally; exacerbated deep racial inequities in health; revealed fractures in the bedrock of the nation’s public health infrastructure; and made pressing demand for a robust health care workforce,” Gresenz wrote in an email to The Hoya.

The university is well-positioned to complete a full transition by the July 2022 target date, according to Gresenz. Once launched, the GSN will house the bachelor of science in nursing degree, while the GSH will house the global health, health care management & policy and human science degrees. Students graduating before the schools are launched in 2022 will still receive their diplomas from the NHS.

DeGioia’s email said the search for a dean for the GSN would begin in the coming weeks. The GSH will begin a search for a dean after a planning process to determine the school’s mission and area of focus, overseen by Gresenz and John Monahan, senior advisor for global health to DeGioia.

Collaboration with students and faculty of the respective schools will be instrumental in developing their own independent visions, according to Gresenz.

“The future faculty of the School of Nursing has been meeting regularly, with the support of an outside facilitator, to identify and prioritize areas of growth and opportunity,” Gresenz wrote.  “We will be seeking input, advice, and thoughts from students as we work to bring these schools from concept to reality over the next 18 months.”

The NHS is the smallest of the four undergraduate schools at Georgetown, with approximately 550 undergraduate students. One area of concern raised by students in the NHS is that splitting into two schools will disrupt a close-knit community and distance those studying nursing.

“We think the nursing students may feel a little isolated because the NHS always had a strong sense of community between all 4 of our majors, so it will definitely be a change to have two separate schools,” the NHS Academic Council’s Executive Board wrote in a statement to The Hoya.

With effort, it will still be possible to maintain a strong bond between the two programs while also offering students an academic experience more personalized to their major, according to Mahidadia.

“The NHS Academic Council believes that it is our role to bridge this gap in the future — to maintain this familial atmosphere that has been established between nursing students and other healthcare-oriented students since the inception of the NHS in 2000,” Mahidadia wrote. “We are excited to see how GSN and GSH expand in the coming years and look forward to student-involvement in making those spaces a home for future hoyas.”