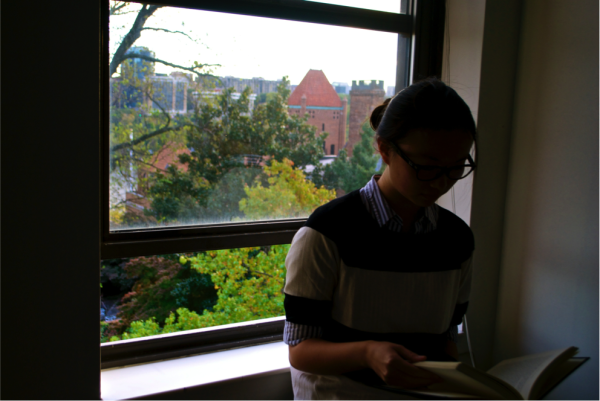 In all our deciphered knowledge of the English language today, our pool of understanding has only diminished in depth. We no longer read with a command of the language but as if we are borrowing the words — visitors in a world of creativity.

Writers of the past decorated their emotions during a time when verbal expression was still being invented. Words held different meanings, different weight and pointed to different allusions. But these terms, once used to encapsulate brilliant notions and sentiments, are now obsolete and archaic. For instance, Geoffrey Chaucer wrote centuries ago, “By nature, men love newfangledness,” a line that would likely make little to no sense today.

Renaissance writers like Sir Thomas Wyatt wrote during the volatile and tense time that King Henry VIII was on the throne, and Wyatt’s impression of the court, if listened closely, can be heard through whispers in his poetry. His control of language allowed him to write in a subversive but slippery and elusive tone. In “They Flee From Me,” Wyatt wrote, “They flee from me that sometime did me seek, / With naked foot, stalking in my chamber.”

How does one read these lines today? How differently would it have been read years ago? What different connotations does “naked foot” and “stalking” hold to a reader of modern-day, equipped with the knowledge of hundreds of dictionaries and the world of the Internet? At first blush and literal interpretation, the speaker seems to tell of women who once kept him intimate company within the privacy of his chambers. But if a reader can give way to what they believe they know, a world of understanding unfolds. The femininity of the women in this poem is a metaphor for the court during Henry VIII’s rule, and the love that has been lost, symbolic of the power in court the speaker once held.

The belief that we are so know so much is paradoxically stunting our ability to comprehend and digest literature. We are no longer engaging in a conversation or being active participants in reading. With so many words and rhetorical devices now defined and delineated, we tackle a reading with pre-determined notions and expectations of a writer’s creativity.

Henry Howard, Earl of Surrey’s introspective tone, Edmund Spenser’s brilliant extended metaphors that were influenced by Queen Elizabeth and Protestant religion, Ernest Hemingway’s powerful simplicity — none of these things can be fully understood with the way many read today.

The greatest writing comes from the people who lose their minds in it, giving way to a world of terror, beauty, elation, violence, despair, sensuality, in the form of words so-delicately strung to one another. These writers call for their audience to reach out, find fragments, hold them up to the light, let the sun reflect through the panes and see different gradients of light be displayed. The manner in which this generation reads today, believing we know so much because the dictionary says we do, is a dangerous plateau in creativity. We know so much less, deceived into thinking we know so much more.

Ask yourself why you read, evaluate the manner in which you do, and challenge yourself to delve in with a naked palette.

Sarah Kim is a junior in the College. Infinity Songs appears every other Sunday at thehoya.com