She ran and wrapped her small arms around my leg.

I bent down and lifted her tiny body into my arms. Long, thick lashes framed eyes that seemed too large for her face, but they were beautiful eyes —a deep, bluish-black, like the water of a fish pond where the surface water mirrored the color of the rocks strewn across the floor. She smiled at me, then tugged at my long hair that was pulled into a tight braid.

I watched as a few children chased each other through empty cement frames where doors should have been. The building was just four cement slabs stacked on top of another, enclosed by shoddy, crumbling walls. Several steps on each staircase had fallen away, leaving the skeleto
n of curled iron to step on. But this was what 50 little girls and boys called “home.” Shrieks of laughter came through another concrete frame and children followed soon after.

It was the summer after a 7.0-magnitude earthquake ravaged Haiti, destroying the country and its people. I was travelling as a missionary, working in orphanages, churches and small villages. I remember being driven from Port-au-Prince to the home of a Haitian pastor who would be hosting my group, passing buses with people spilling out the windows and doors, naked women, pigs and trash-filled streets. Proud homes lay in heaps of rubble, leaving only the foundation and a haunting silhouette of what used to be.

When we arrived at Pastor Carl’s house, he boisterously greeted us with a beaming smile and mandatory hug. “Welcome, welcome!” He motioned for us to drop our bags and ushered us quickly into a small room, where a feast had been laid out for our arrival. Pastor Carl fanned his arm across the table of food, his eyes dancing with proud excitement. There were two bowls bright, crisp lettuce, a plate of tomatoes, and rice. This became our standard meal for the next 10 days. Mosquitos became our very close and intimate friends, we learned to love the curves and cruxes of the home through the lack of electricity and to brush our teeth without swallowing any of the contaminated water, and each night, we found the most comfortable positions to rest your head on hard, linoleum floor.

But I will tell you: Haiti, during this time, was the most beautiful place I have ever been. 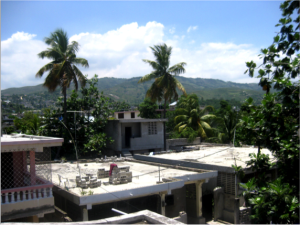 Pastor Carl’s daughter and wife died in the earthquake. The details were never asked, nor shared. But I remember on the night of day six, we were sitting on the roof of his home when he stood up abruptly. He raised his arms to the dark sky and he stood there in silence. No one spoke, and the sky seemed to look back at him, twinkling a star every now and then to assure him that it was listening. Pastor Carl said, “You see, my friends, God loves us. God loves me. He takes me away from all that blinds my eyes, and he gives my soul and my body a place of refuge beyond this earth. I love you, God!” he shouted. “I love you!” And I knew, when he looked into the sky with his arms reached high above his head, he was looking for his wife, for his daughter. He was reaching for them, but also offering them to God, to a place of sanctuary, to their freedom.

Pastor Carl had lost those that he held closest to him in the earthquake. But instead of feeling as if his wife and child had been ripped from him arms, he believed God had shown them his ultimate love, had enveloped them in the night and taken them to live by his side. And this brightness and hope resonated through nearly all the people I met during my stay in Haiti. There was a remarkable sense of wide-spread faith and resilience. People did not walk heavy and burdened by their loss, their despair, but weightless in their love for God — it encouraged those who had lost everything to move forward, to desire growth and to live again.

On the last day, my group and I walked 16 miles to a tent community to meet a boy with an incredible story to share. These tent communities were not far and few — clusters of tarps dotted Haiti’s landscape. Not only because there was no money to rebuild, but there was a great distrust in the idea of living inside an infrastructure. 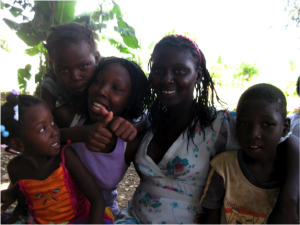 We arrived at our destination with the midday sun glaring hot on our skin, drenched in sweat, legs and shoes coated in a pound of dirt. We were welcomed warmly by a group of women, and when our translators explained whom we had come to see, they took us quickly through a maze of tents. Old men, who were lying under the tarps to hide from the heat, raised their heads at us and little faces poked from beneath tent flaps to see what strange-looking visitors had come. We finally came to a stop at one tarp-tent, indistinguishable from any of the hundred others. But when our translator lifted the flap, we all saw him: a boy, no older than 14, lying on a bundle of neatly folded blankets. His skin stretched so tightly over his body it looked transparent. The outline of the bones in his legs, his arms, his hands were so wrongly clear to the eye. The only part of him that moved were his eyes, alive with emotion, darting across all our faces with curiosity, as if he we were all inhabitants of different worlds. His mother sat, brushing her fingers across his enlarged, hairless head, and motioned for us to sit, to meet her son.

The boy, born with paralysis and many other physical and mental ailments, was predicted by doctors to be incapable of living past the age of three. “God provides,” the mother said. “He understands our suffering and pain, and he shows he is the answer to it all. He carries it for us,” she said. “And we live a beautiful life because of it.” A woman from my group asked the mother what she thought God was providing with the earthquake. She responded, “You have nothing if you do not trust in God’s plans. The greatest blessings, the most wonderful ones, come out of difficulty.” The sounds of children’s laughter came from outside the tent. Several small feet ran past and the laughter left with it.

In that moment, I realized that the people of Haiti had found it. They found the peace that many people dedicate their entire lives to try and write step-by-step manuals for. The people of Haiti, during a time of catastrophic destruction and hopelessness, found an unending well of peace and love through their faith in God. They clung to the incredible notion that even the deepest anguishes that threaten to swallow and crush you are truly blessings to take, nurture and hold close to you.

When I think back to my time in Haiti, I do not remember it by the poverty, the thousands of tents that lined the streets, the smell of a decaying dog corpses or the rubble of homes and corroded iron that lay exposed, but by the trees that waltzed in the wind, the rolling mountains in the horizon and the sound of children laughing.

I remember it as the most beautiful place I have ever been.

Sarak Kim is a junior in the College. This is final appearance of Infinity Songs.