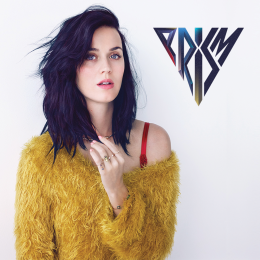 When “Roar” exploded on to the singles charts in early September and easily outsold competitor Lady Gaga’s “Applause,” it felt like Katy Perry was reclaiming her title as queen of pop. Here was the Perry you couldn’t help but admire, coming out tougher than ever after endless tabloid gossiping and a messy divorce. It’s hard to admit that I couldn’t help but feel a little disappointed with Prism, the album that followed.

“Roar” is an undisputable success. The combination of thumping beats, inspiring tough-girl lyrics and Perry’s powerful voice makes it a track that uplifts and motivates. It’s pop music at it’s best: loud, proud and defying all those cynical electro-pop haters. And then there’s the music video, with nearly 140 million YouTube hits, which has Perry showing the world: “Who cares about having a bad divorce? I can tame a lion simply by roaring at it and being my fabulous self.” Silly? Yes. But at least Perry acknowledges the superficiality and ridiculousness of her own persona and uses it to her advantage. This is, after all, the woman who strapped whipped cream cans to her bra. It seemed that “Roar” was the signal that the Perry who shocked the world with “I Kissed a Girl” was back, a little more mature and confident in her position in the music world.

But it’s as if she lost that confidence to follow this attitude through to the rest of the album. What follows the triumphant “Roar” are a number of good but predictable club hits that have simple, repeated lyrics and uninteresting tunes. Tracks such as “This Moment” and “Double Rainbow” seem promising with beats that imply a buildup similar to that of “Roar,” but instead, they climax at a breathy and underwhelming chorus, leaving you unsatisfied and waiting for the powerful Perry you love. “Dark Horse” meanwhile, a single clearly headed for club playlists, is just uncomfortable to listen to, with the chorus awkwardly following the verses in a conflicting mix of electro and light pop.

Despite these letdowns, there are some tracks that seem to promise some of that pop gold to exist. “Birthday” and “International Smile” are reminiscent of the “California Girls” days, bringing a ’70s and’80s flare to modern pop in a satisfyingly cheesy way. They’re light, easy listening, but with a sound that’s clearly Katy Perry, and you have to respect her for sticking to her personal style and for carving out her own identifiable genre in the mass of current pop music. The album also has a good mix of slightly superficial pop tracks with ones that are more vulnerable and honest. “By The Grace of God” might seem a little try-hard and overly emotional, but you can’t really help but feel for Perry and respect her honesty, and it’s refreshing to hear her sing when accompanied by simple instruments, rather than her usual backing of layers of electronic sound. The tracks are good, and after a couple of listens, a lot of them will be stuck in your head. But there is definitely something missing.

This album won’t cost Perry her hoards of devotees, and the tracks are produced well enough to mean a number of them will still probably be chart successes. But it’s a shame that she didn’t take the opportunity to be a little more creative. Perry has proven her worth as an artist over and over again — pushing boundaries in a shocking, but not crude, way with immense success that means she deserves the fame she has. The album may have let her down, but “Roar” proves that she still has that spark; we can only hope that it comes out a little stronger next time.