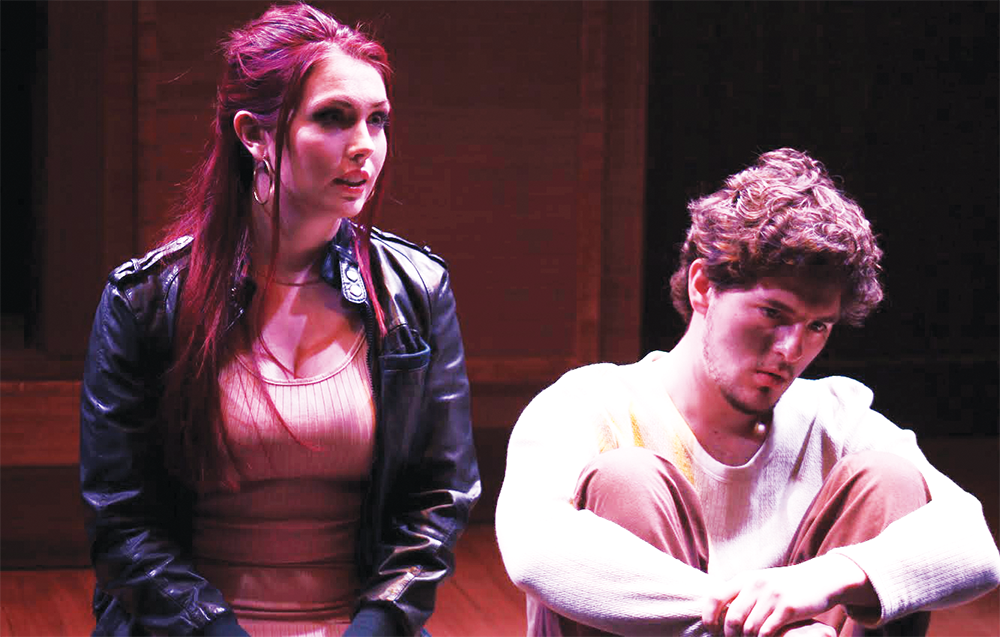 From Georgetown’s cocurricular student theater group Nomadic Theatre comes the exceptional “The Last Days of Judas Iscariot.” Based on the play by Pulitzer Prize-winning Stephen Adly Guirgis, this production follows the appeal trial of Judas Iscariot’s damnation. In downtown Purgatory, an ambitious young lawyer by the name of Fabiana Cunningham, played by Alison Lane (COL ’19), defends one of history’s most controversial figures.

“Nomadic Theatre is a very socially engaging group. We wanted to take these topics and engage with them in a way that’s respectful and not off-putting for the audience,” student producer Bee Jaworski (COL ’17) said. “It’s very important to put on these sorts of plays with difficult material in them to learn from them, to let that content show us the lessons we can learn from it.”

The play brings in some high-profile witnesses to speak about Judas Iscariot, including Sigmund Freud, Pontius Pilate, Mother Teresa and Caiaphas the Elder. Biblical emblems such as St. Monica, St. Peter and St. Matthew also make memorable appearances, as do Satan and God themselves.

“The play is sort of like a mystery. It’s this uncovering — this unpackaging — of history and time. In doing that, it’s important that we get glimpses of what other people think about Judas. We see it through his mom; we see him through Mother Teresa; and, at the end of the day, we let Judas have his say,” student director Velani Dibba (SFS ’17) said. “Because that really is like a court case works: You hear everyone else’s testimonies. The play allows you to form your own judgements based on who you think you would trust. Would you take [the] saints’ words for it? Would you take Mother Teresa’s word for it?”

A fascinating character, defending attorney Fabiana Cunningham leads the narrative into uncharted territory, questioning each witness’s role in history, as well as his or her own regrets and struggles.

“She is definitely an instigator. She knows exactly what buttons to push to get the characters to say what she wants them to say. She has this understanding of these people that you wouldn’t expect her to have,” Lane said. “She just knows that there is more than meets the eye to all these different characters and knows what to say that is going to get that out, that hidden truth below what the exterior is. As an audience, we don’t really know what these characters were actually were when they existed, so it’s interesting to see this perspective from a lawyer that is just a woman, not a special character or historic figure.

While successfully raising thought-provoking debates and exploring difficult subjects, the play maintains an uproariously sharp tone, providing audiences with a fair share of laughter. The show explores both the bitter and the sweet behind Judas’ trial.

“It’s a very atypical comedy in the sense that it explores serious subject matter, but, at the same time, we have these lighthearted gags, these higher-level intellectual jokes and these references.” Dibba said. “It has something for everybody, which I think is great, because at the end of the day this play is a model of life — it’s life in a play.”

“This is a play about imperfect people. Often times in plays, there’s a tendency, I think, to expect the ideal in a play. So, you look at a character and go like, ‘Oh, the play is saying I should or shouldn’t behave like that person,’ and this is not one of those plays where there are good guys and bad guys; it’s just people doing things that are good and bad,” Dibba said.

Danny Frumento (COL’ 18) steals the show with his charming personification of Satan, fully dressed in Gucci and drinking tall bourbons. Alongside Andrew Schneider (COL ’19), who offers a moving portrayal of Judas, Frumento shines in a bar conversation between the two characters.

“The character of Satan just knows every little thing that you hate about yourself, and he knows exactly where each character’s insecurities lie, where their regrets lie, where their sorrows are. He serves as this catalyst for the rest of the characters, because he pulls those out and puts them on the spotlight, just like all Judas’ regrets are on the spotlight, too,” Lane said.

Ultimately, audiences can relate to Judas beyond his historical controversy. His deep regrets and self-punishment resonate as he struggles to find redemption.

“Judas is a kind of representation of those deep regrets that we have. Even though you never really know, you never really find out whose personal regrets are what. Every character across the board has something they regret,” Lane said. “None of them have lived perfect lives, and even though you can only see bits and pieces of that, I think Judas serves that purpose to show that everybody is feeling that fear, that regret and that sadness, and that’s what ties the entire cast together in the end.”

“The Last Days of Judas Iscariot” runs from March 23 to 25, as well as March 30 and April 1 in Village C Theater. Student tickets are $8 and general are $12. Tickets can be bought at the Davis Performing Arts Center or online.