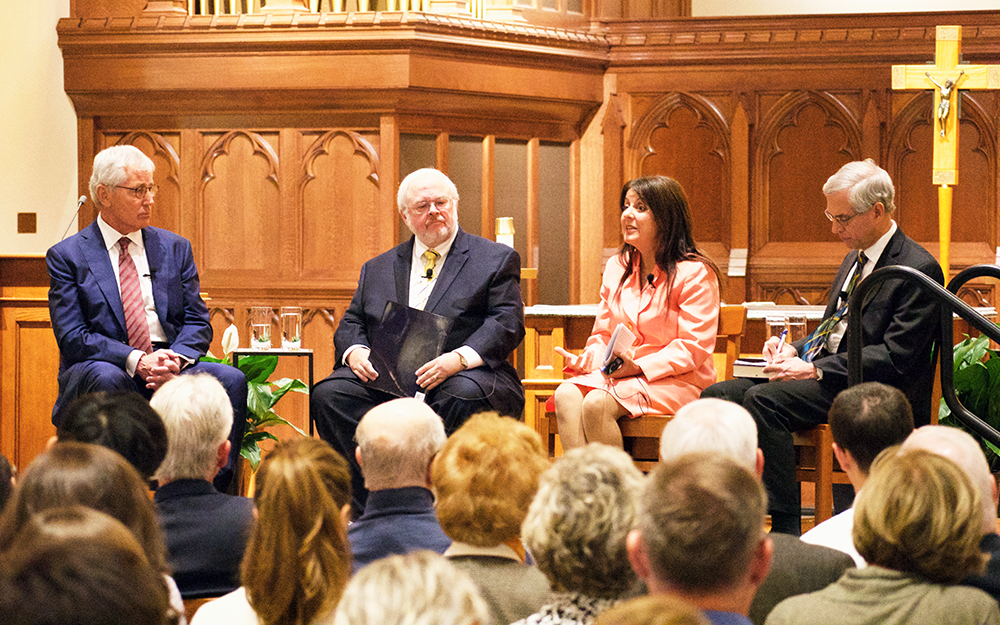 Negotiation, rather than a military solution, is vital to achieving positive, sustainable peace with North Korea, former Secretary of Defense Chuck Hagel said at a panel Nov. 2.

North Korea is under international pressure to end missile and nuclear tests on the Korean peninsula, where it has conducted six nuclear tests since 2006. The dictatorship has threatened to attack the United States mainland, territories like Guam and allies in the region including South Korea and Japan.

Co-hosted by the Office of Mission and Ministry and the Initiative on Catholic Social Thought and Public Life, the event featured Maryann Cusimano Love, an associate professor at the Catholic University of America, and Stephen Colecchi, the director of the Office of International Justice and Peace at the United States Conference of Catholic Bishops.

The panel was moderated by John Carr, director of the Initiative on Catholic Social Thought and Public Life.

The panel marked the beginning of the “Dahlgren Dialogues,” a new series of discussions on social justice hosted by the Office of Mission and Ministry.

Carr said the initiative “seeks to deepen conversations around social justice in light of the rich and deep theological heritage of our Christian Catholic faith.”

Hagel, who served as defense secretary under former President Barack Obama and previously as a Nebraska senator from 1997 to 2009, said the United States needs to put greater emphasis on diplomacy and dialogue when dealing with North Korea.

“Diplomacy at the most basic level, of sitting down across the table and asking each other that question: ‘Well, what is it that you want?’ And I don’t think you can start negotiation by demanding certain qualifications before you even sit down,” Hagel said.

Colecchi said dialogue is what is most needed considering the current state of relations between the two countries, with Trump consistently referring to the North Korean leader Kim Jong Un as “Little Rocket Man” and threatening to “totally destroy” North Korea during a speech to the U.N. General Assembly on Sept. 19

“The United States has great strength and patience, but if it is forced to defend itself or its allies, we will have no choice but to totally destroy North Korea,” Trump said. “Rocket Man is on a suicide mission for himself and for his regime.”

Colecchi said Trump must restart his relationship with North Korea.

“We need to open a dialogue. The only way you can transform a relationship is by talking,” Colecchi said.

Hagel called out Trump for his abrasive rhetoric, saying Trump’s strategy is “lowering yourself to the same standard as a ruthless dictator.”

Hagel, who also served as a sergeant in the Vietnam War, said while the United States may have other options to consider, the military option is most risky.

“There is no military solution, unless you are willing to pay a pretty high price,” Hagel said. “And that high price would be probably millions of dead South Koreans, tens of thousands of dead Americans.”

Hagel contrasted this approach with another push for greater negotiation and international cooperation, citing the 2015 Iran nuclear deal, in which Iran agreed to drastically reduce its nuclear capabilities in return for lifted sanctions.

“The most successful agreements that have been reached since World War II are multinational agreements, more than just two parties,” Hagel said.

The three panelists also emphasized the importance of religion and morality in policy considerations.

Cusimano argued against the false dichotomy between having a religious or spiritual life and understanding national security politics.

Colecchi further advocated for the role of religion and faith in world affairs, highlighting interdependence and mutual respect.

“Respect is the foundation for relationships individually, for relationships between peoples, and among nations. The [Catholic] Church has a capacity to speak with other religious traditions, to weave together shared moral norms,” Colecchi said. “Faith contributes a belief in humanity that allows us to build relationships where there weren’t any before.”

Colecchi is optimistic about the direction in which the world is progressing, citing international progress on issues such as human trafficking, advancing medicine, and support for developing societies.

“There are more things that unite people than divide them. And more and more, until we realize that our fates are all linked, we’re going to be in trouble,” Colecchi said.

The event concluded with an opportunity for the audience to ask questions, with one audience member asking Hagel for one piece of advice he would give to Trump.