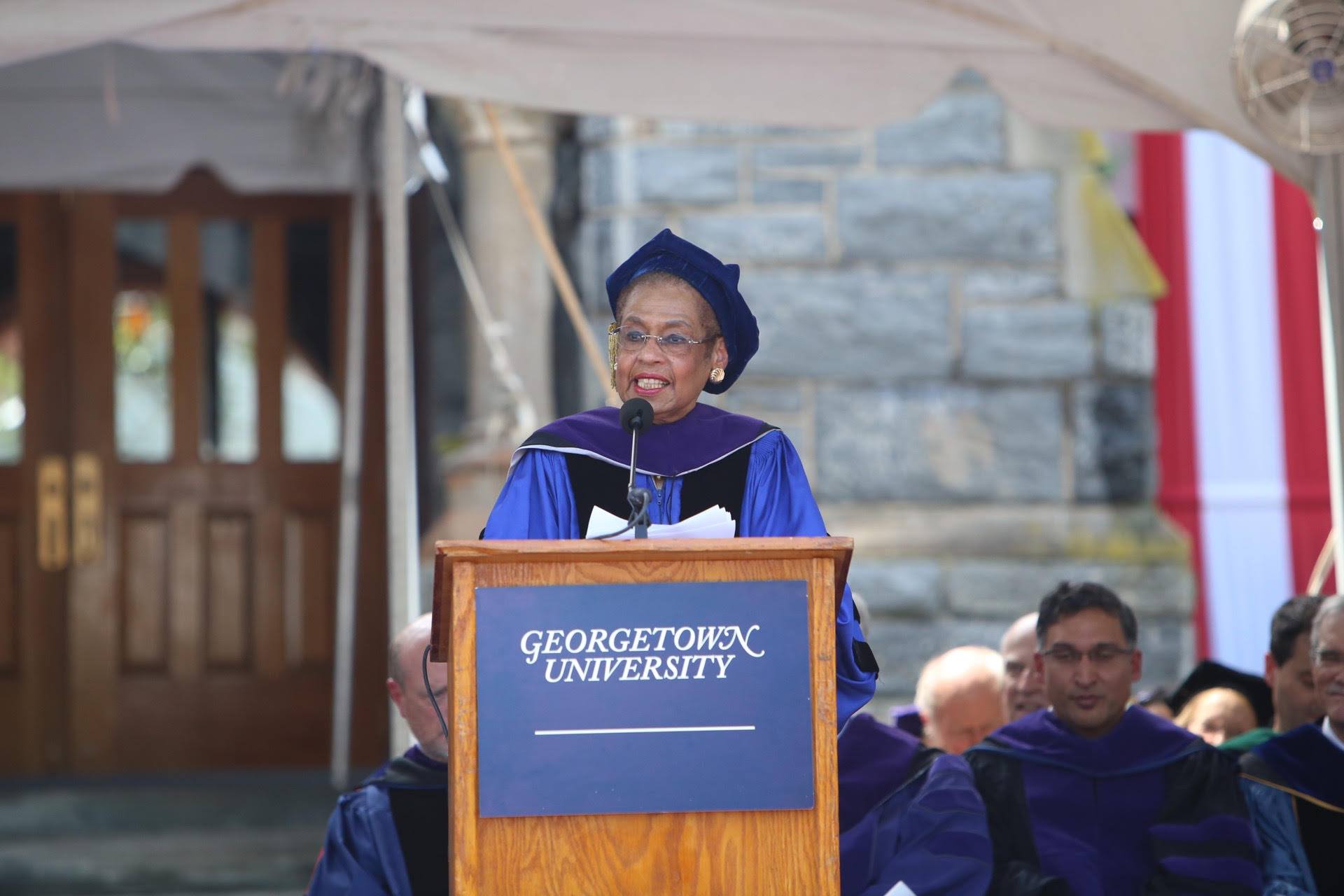 College students must be respectful of all viewpoints and allow others to speak, Del. Eleanor Holmes Norton (D-D.C.) said in her commencement address to graduates of the Georgetown University Law Center on Sunday.

Norton, who has served as Washington, D.C.’s representative to Congress since 1990, was once an active member of the 1960s civil rights movement. She knows better than most what it takes for a social movement to succeed: According to Norton, it is free exercise of speech.

“Change will only occur if we make the highest, best and most peaceful use of the First Amendment,” Norton said.

“Will a generation that is using protest so precociously for issues they favor, like gun safety, exercise the tolerance that allows those who favor the opposite to at least be heard?” Norton said.

Norton insisted that preventing others from speaking is not acceptable. As a young lawyer, she had defended several people who had been prevented from speaking in public venues because they were known for making racist and anti-Semitic statements. She defended them not because she agreed with them, she said, but because they had a constitutional right to speak.

“My clients were a minority in our society: proselytizing racists and anti-Semites with whom I had nothing in common,” Norton said. “Yet it was clear that the ultimate client was the First Amendment.”

In addition to speaking at the commencement ceremony, Norton also received an honorary Doctor of Laws. Though he did not give an address, Merrick Garland, chief judge of the U.S. Court of Appeals for the District of Columbia Circuit, was also awarded an honorary Doctor of Laws. The Law Center graduation ceremony commenced on Healey Lawn, thanks to a respite from the previous day’s rain.

“Those who have brought change to our country did not win it by shutting down the other side,” Norton said. “They persisted against their adversaries until they persuaded the country that they should prevail.”

Even once change-makers have convinced the courts, the general public must come to accept the change for it to last, Norton said.

“Change-makers, acting with vital help from the law, must persuade the democratic majority to accept change, even when they have won it in court,” Norton said.

When facing a new era of challenges not foreseen when the nation’s founding documents were written, the country must undergo a reteaching and relearning process to come to terms with the meaning of the Constitution and Bill of Rights in today’s terms, Norton said. The people best suited to this task, according to Norton, are not members of her generation, but the new Georgetown Law graduates who are more able to relate to younger Americans.

“Who is in the best position to help not only young people, but also the American people relearn the purposes and uses of the First Amendment for these times and in our polarized society?” Norton said. “I believe I am speaking to them now.”

The law graduates are particularly well-suited to convince other people of their generation, and in their profession, of the benefits of a free exchange of ideas, according to Norton.