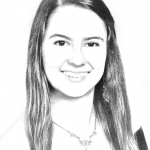 My voice shook as I read out the first lines.

“A weasel is wild. Who knows what he thinks?”

Around me, bloodshot eyes alternated between openly staring at my face and gazing unfocused into the distance, while ears curiously awaited the words that would follow. I had gathered my closest confidantes in the dead of night for one last gathering before it was all over. Like a secret meeting of my own little sisterhood.

My voice gained confidence as the story took over, enrapturing my friends with the beautifully detailed encounter of a woman and an animal in a tale of habit and instinct. I commanded their attention in a metaphysical state of chaos: at once trapped in emotional self-awareness and falling in love with storytelling for the thousandth time in this life. I could feel the atmosphere shift as seemingly meaningless drivel about weasel hunting habits blossomed into a poignant message about life. The timbre of my words was swallowed with passion. My favorite paragraph. My mind wandered to the first time I uttered these words.

I sat with my hands shoved deep in my lap, waiting for my turn to read in our round-robin edition of the final writing class of the year. As my neighbor’s last sentence waned, I took a deep breath and launched into my assigned paragraph.

“I would like to learn, or remember how to live.”

If I was anywhere else, the power of that sentence would have stopped me, frozen time completely in a pure moment of awe. I understood it wholly and completely; it articulated something I didn’t even know that I knew I felt and wanted. It was the culmination of a semester’s long exploration of my regrets and longings, all finally fleshed out in written word. The last minute decision to take the class had been a crucial stepping stone in my realization that I wasn’t right here.

I snapped back to reality and snuck a glance up at the faces of my friends, getting ready to deliver the most life-changing parting gift that I could think to give them.

“I think it would be well, and proper, and obedient, and pure, to grasp your one necessity and not let it go, to dangle from it limp wherever it takes you.”

I remembered how I sat small in that writing class, my mind echoing the same few thoughts over and over. As if this one line had cleared away all other conceptions but the truth. It was unavoidable, and for the first time I heard myself fully, and I listened.

I made a mistake. I don’t belong here. My necessity is somewhere else.

Finishing the story for my friends, we sat in a loaded silence, seconds passing like minutes. Doubt and fear sprung up within me as I considered for the first time that maybe they didn’t get it. Not like I had. The message had hit me when I was at a low point, when I was open to inspiration and meaning, when I needed change. What if it wasn’t the same for them?

Four pairs of eyes met mine, and they told me everything. More than what the story would have meant for each of them as individuals, they understood what it had meant for me. I had hoped that maybe I could change their lives as mine had been changed, but what I got was so much more. More than the story, they saw me — they saw the reason I had read it to them was to explain myself more fully than my own words could ever articulate. They understood why I had to go.
Cyrena Touros is a rising sophomore in the College. The Outsider appears every other Wednesday.