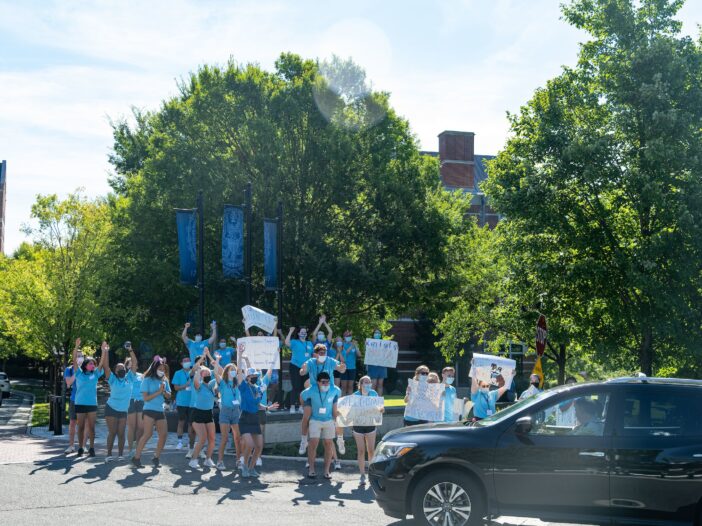 Several changes were made to Georgetown’s New Student Orientation (NSO) for this year, including new modules on microaggressions and implicit bias training in an effort to foster a more inclusive and equitable welcoming for first-year and transfer students to the Hilltop.

NSO, which takes place in the days leading up to the first day of classes, is designed to ease the transition to campus for first-year and transfer students through a series of workshops and field trips. This year’s programming included modules on wellness and community expectations as  well as the new trainings focused on diversity, equity and inclusion (DEI).

This year’s NSO coordinators, Claire Atkerson (COL ’22), Ben Telerski (COL ’23), Marisa Morrison (SFS ’23) and Maya Shah (COL ’23), made the changes because they wanted to increase focus on equity and inclusion as a part of the first-year orientation experience, according to Atkerson.

“We instituted a microaggression and implicit bias training, which was aimed at making a more inclusive space for new students,” Atkerson wrote to The Hoya. “It focused on the impact of microaggressions, examples of common disability, race, gender, class, and sexuality-based microaggressions, and action items for people who encounter microaggressions as victims, perpetrators, and allies.

The new modules also included a “Confronting Georgetown’s History” module to grapple with Georgetown’s history of enslavement, according to Atkerson.

In 1838, Georgetown’s Jesuit presidents sold 314 enslaved people, who are known today as the GU272+, to pay off the university’s construction and maintenance debts. The sale of the GU272+ raised $115,000, which is equivalent to about $3.3 million today. The funds raised by the deal helped the university remain financially afloat. Following activism from the Georgetown community demanding reparations, President John J. DeGioia (CAS ’79, GRD ’95) committed to creating a reconciliation fund in 2020.

First-year Claire Vogel (COL ’26) said she appreciated the attention given to GU272+ and conversations about racial issues at Georgetown during NSO.

“Coming to Georgetown from New Orleans, I was already familiar with the GU272,” Vogel wrote to The Hoya. “And being from a Deep South state where these conversations can be minimized, I really appreciated the school openly talking about its past and the active effort to educate and even mobilize students to help not only make reparations for the past, but also pave the way for a better future and a more inclusive environment.”

First-year student Julia Swerdin (COL ’26) said NSO helped to ease her transition to college by allowing her to better orient herself around campus and Washington, D.C. while getting to know fellow new students before classes started.

Atkerson said she and other NSO coordinators chose to make changes to the programming based on her own experience at NSO as a first year. According to Atkerson, she felt out of place coming to Georgetown as a person of color and thought NSO did not do much to ameliorate that feeling.

“We had activities like the identity wheel, which were alright at introducing students to the concept of diversity but didn’t do a lot to prepare them to interact with people from different backgrounds,” Atkerson wrote.

Atkerson said these modules are important as students transition to a new environment in college.

“We covered topics on consent, safe drinking practices and mental health, and included upperclassmen orientation captains to give a bit of student perspective. We also had a ‘game’ where students were able to pour what they thought standard drink sizes were and compare them against actual standard drink sizes,” Atkerson wrote.

Swerdin said her favorite moment during NSO was the Jesuit panel, which allows first-year students to hear from members of different faiths from Campus Ministry. Swerdin, who is Jewish, said this event helped to make her feel welcome on campus.

“Coming to a Jesuit school, I wasn’t really sure where I’d fit in religiously, or spiritually, or culturally, so to immediately have the reassurance that there is a group of ministry that are here to have my back and to be welcoming and opening to every single student including me was really nice,” Swerdin said to The Hoya.

Atkerson said she has heard positive feedback from NSO Orientation Advisors (OAs) and new students on the changes made to the program and hopes that future coordinators will build on the work they have done to make NSO more inclusive.

“I have heard positive feedback from OAs and new students, who said that particularly the DEI-related changes made them feel more included in the Georgetown community,” Atkerson wrote. “That in particular really warms my heart, because that’s exactly what I wanted from NSO when I was a first year.”