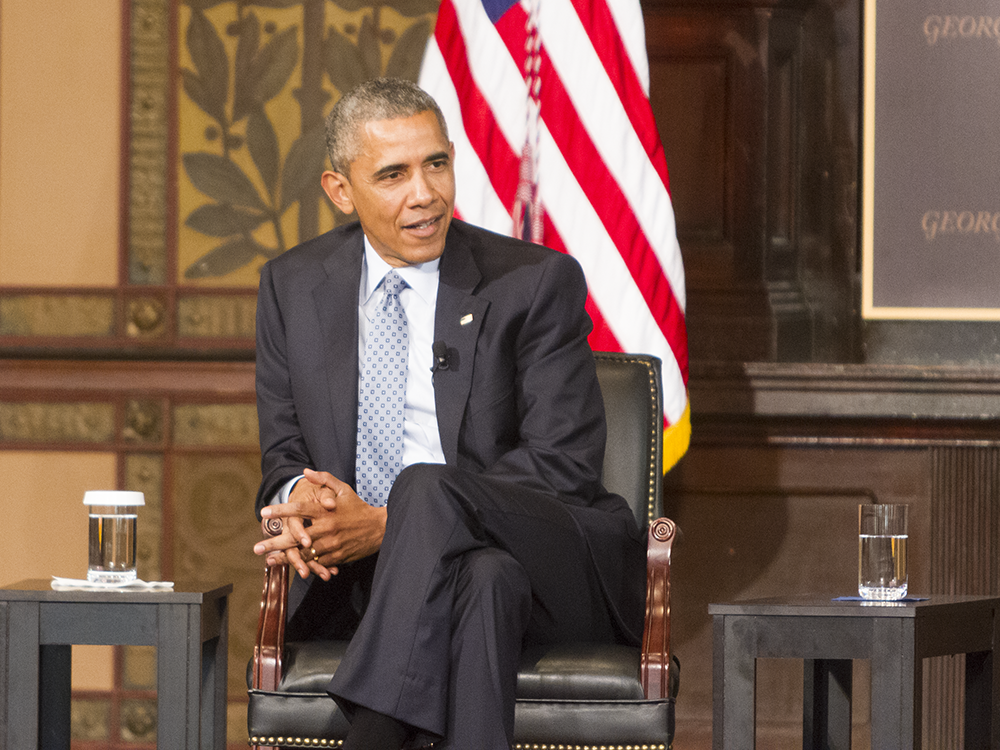 The conversation is part of a three-day Catholic-Evangelical leadership summit on campus hosted by the Initiative on Catholic Social Thought and Public Life and the National Association of Evangelicals. The summit, which has brought many academics and clergymen together from around the country to discuss poverty, will end May 13.

This is the third time Obama has spoken at Georgetown. He previously spoke in Gaston Hall in 2009 and in Dahlgren Quadrangle in 2013.

University President John J. DeGioia introduced the panelists and explained the pertinence of the topic of poverty.

“We have the second highest percentage of children living in poverty in all developed nations,” DeGioia said. “One in five children in our nation lives below the poverty line. Here in the District, one in four. … The human cost, the moral cost of this issue is pervasive and demands our most serious attention. We all have a stake.”

Dionne began the discussion by asking Obama about his plans for the future of policy in regard to the nation’s poor.

“We are at a moment, in part because of what’s happened in Baltimore and Ferguson and other places, but in part because a growing awareness of inequality in our society where it may be possible not only to focus attention on inequality but also to bridge some of the gaps,” Obama said.

Obama said the conservative and liberal stances on poverty are often seen as polarized, despite the fact that many policymakers on both sides of the aisle are passionate about the issue. He said that he knows many conservative policymakers who “deeply care about the poor” alongside their liberal counterparts.

He also stressed that the U.S. can make strides in addressing poverty, given the country’s poverty rate has reduced 40 percent since 1967.

“I want to emphasize that we can do something about these issues,” Obama said. “I think it is a mistake for us to suggest that somehow every effort we make has failed and we are powerless to address poverty. That’s just not true.”

Obama said that that he believes his job is to “guard against cynicism,” particularly in regard to combatting poverty.

Dionne continued the discussion by asking Putnam about American children living below the poverty line and his book “Our Kids: The American Dream in Crisis.” Putnam said that his book presents evidence about the growing gap between rich and poor children. He said that the gap is growing in terms of family stability, investments of time and money parents make in their children, the quality of schools children go to and the community support they receive.

“All of that evidence suggests that we do face a serious crisis in which, increasingly, the most important decision that anybody makes is choosing their parents,” Putnam said. “My grandchildren, the smartest decision they ever made was to choose college-educated parents and great-grandparents. But out there are a group of kids that are just as talented and just as hardworking, but who happened to choose parents who weren’t very well-educated or high income. Those kids’ fate is being determined by things that they had no control over. That’s fundamentally unfair.”

Putnam said that Americans faced a wealth and opportunity gap like this one before, particularly during the Gilded Age at the end of the 19th century.

“That period was overcome by a reawakening of the conscience of America across party lines with the important contribution of religious leaders to the fact that these are all our kids,” Putnam said. “This is a kind of problem that we could all solve as long as we all recognize that it’s in everyone’s interest to raise up these poor kids and not put them in the dust.”

To continue the discussion, Dionne asked Brooks about his views on safety nets, or programs that prevent the poor from falling beneath a certain poverty level, and how the left and right can work together to address and improve these programs.

Brooks said that he joined the free enterprise movement, advocating for an economic system in which few government restrictions are placed on business and enterprise, because he deeply cared about combatting poverty. He added that partisanship has prevented groups who both want to fight poverty from making progress.

“We’ve gotten into a partisan moment where we substitute a moral consensus about how we serve the least of these our brothers and sisters and we pretend that moral consensus is impossible,” Brooks said. “We blow up policy differences until it becomes a holy war.”

Brooks said that this problem could be stopped if policymakers talk about poverty with a series of principles in mind. He said each side must not “otherize” poor people, but instead should humanize them and consider their motivations.

He said that policymakers should support the safety net, but use the net only for the indigent and pair it with the “dignifying power of work” to best combat poverty in America.

Obama responded to the other two panelists by discussing how he plans to reduce the wealth gap and combat partisanship. He said that the best anti-poverty system is a job, and that policymakers must consider the macro-economy as a whole to develop solutions.

He added that although he agrees with Brooks that the free market has lifted many out of poverty, the wealth disparity leaves many people behind from receiving opportunities to progress. Obama said that the opportunity disparity seen today has been occurring for many years, particularly with the black population.

“In [Putnam’s] day, this was also happening,” Obama said. “But it was happening to black people. Part of what’s changed is that those biases or those restrictions on who had access to resources that allowed them to climb out of poverty; access to the firefighters job, to the assembly line job, the job that paid well enough for them to be in the middle class and got you to the suburbs. All those things were foreclosed to a big chunk of the minority population in this country for decades.”

He said that both parties must find common ground on investments in public schools, early childhood education and expanded economic opportunities in isolated communities.

“It’s important for us to recognize there is a genuine debate here,” Obama said. “And that is, what portion of our collective wealth and budget are we willing to invest in those things that allow a poor kid to access what they need, both in terms of mentors and social networks, as well as decent books and computers, in order for them to succeed.”

Dionne asked about how to tear down the partisan walls to increase investments in the programs Obama championed.

“Elites in a very mobile, globalized world are able to live together away from folks who are not as wealthy, so they feel less of a commitment to making those investments,” Obama said. “In that sense, what used to be racial segregation now mirrors itself in class segregation, and that creates its own politics.”

Brooks continued the discussion by talking about the morality behind capitalism, and how it must be established to create a snowball effect of progress.

“Capitalism is just a system. It’s just a machine. It must be predicated on right morals, it must be. … We’re talking about right morality toward our brothers and sisters, and built on that we can have an open discussion about how to get our capitalism right,” Brooks said. “Then, the distribution of resources is only a tertiary question.”

Dionne then narrowed the discussion in on race, prompting Obama to discuss how he hopes to communicate with black youth.

“I am a black man who grew up without a father, and I know the cost that I paid for that. And I also know that I have the capacity to break that cycle, and as a consequence I think that my daughters are better off,” Obama said. “For me to have that conversation does not negate my conversation about the need for early childhood education or the need for job training or the need for investment in infrastructure or jobs in low-income communities.”

He added that both political sides must realize that an investment in these communities will help children at every aspect of their lives.

“If we do those things, the values and the character that those kids are learning in a loving environment where they can succeed in school and they’re being praised, they’re less likely to drop out,” Obama said. “When they’re succeeding in school and do have those resources, they’re less likely to get pregnant as teens, to engage in drugs, to be in the criminal justice system. That is a reinforcement of values and characters that we want. That’s where we as a society have the capacity to make a difference.”

Dionne ended the discussion by asking Obama about the role of faith-based groups and the religious community in combatting poverty in the U.S.

“Faith-based groups across the country and around the world understand the centrality and the importance of this issue in an intimate way, in part because they are interacting with folks who are struggling and know how good these people are and know their stories,” Obama said. “It’s not just theological, but it’s very concrete. They’re embedded in communities and they’re making a difference in all kinds of ways.”

The panel was closed to the public, and Georgetown students were selected to attend through a lottery system. Priya Misir (COL ’15) attended the event and said that it was an excellent end to her college career.

“I thought it was a really productive discussion,” Misir said. “I think the president adequately challenged the opposition, opposing views in a highly productive conversation in order to have more bipartisan way to move forward on ending poverty in America. And, I think it was just a great way to end the last four years.”

Christina Ling (MSB ’15) said that she was moved by Obama’s discussion about black youth in America and his relationship with his father.

“Hearing [Obama] speak personally about his background, growing up with a single mother raising him and being black in America really helped me to develop an emotional connection, because usually he’s talking about policy and it’s very high level, but hearing his personal story was really unique,” Ling said.