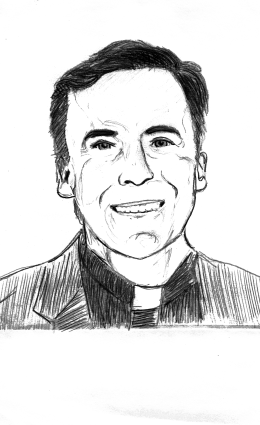 Yesterday, for a few moments, the world fell silent.

About an hour after the white smoke appeared above St. Peter’s Square, inciting the crowds to cheer and chant, the new pope, Saint Francis I, stepped out on the balcony to thunderous applause. After a few words of thanks and prayer for his predecessor, the pope asked for the blessing of the hundreds of thousands crowding the square as well as the billions watching around the world. Francis bowed and, in majestic silence, received the people’s benediction.

On an historic day in the Catholic Church’s history, this moment above all stood out for me. It spoke volumes of the humility of the man who, just minutes before, had assumed the chair of St. Peter. This was a gesture of service, openness and friendship. Those moments of silence in a day filled with the chatter of expectation and prognostication of what the new pope will do, reminded me that we first need to stop and listen to God and to one another before acting or pronouncing.

In Francis, we have the first Jesuit pope. To be a Jesuit means to be steeped in the spiritual and intellectual tradition of St. Ignatius, who founded the Society of Jesus in 1540. At the heart of our formation as Jesuits is the Spiritual Exercises, a series of prayer experiences where the person learns to find God in the midst of ordinary life and to make practical decisions about putting faith into action. One learns to listen more attentively to God and to the subtle movements of the mind and heart. Bowing to the crowds in silence — showing contemplation in action — was the most Jesuit of gestures.

To be a Jesuit is also to be committed to the service of faith, of which the promotion of justice is a central part. Faith and justice go hand in hand. By all accounts, Francis has lived by that creed. Forgoing the trappings of privilege as archbishop of Buenos Aires, he chose to live in a simple apartment, cook his own meals and ride public transportation. As archbishop, he was as comfortable in the slums of the city as in the halls of power. In a telling gesture, he washed the feet of AIDS patients. Francis’ election reminds us to stand with the poor and marginalized. Even better, it reminds us to bring them to the center of our life, for they can teach us about what our priorities must be.

To be a Jesuit is to be committed to a thinking faith. God gave us minds to inquire, and so we put that intellectual force into the service of the Church and the world. In the popular imagination, Jesuits have a reputation of pushing the envelope and challenging authority. Whatever the merits of that reputation, Jesuits never exist apart from the Church. St. Ignatius includes rules for thinking and serving with the Church in his Spiritual Exercises. Among the other religious orders, Jesuits alone take a special vow of obedience to the pope with regard to missions that he may send them on. To question does not mean to be unfaithful. Any good Jesuit will question — even push and cajole — but in the end will be faithful in service to the Church. That includes the pope.

To be a Jesuit is to have an expansive vision. We are the first missionary order, committed to going to wherever the needs of the world and the Church are not being met. The pope took the name Francis in honor of St. Francis of Assisi, the great 13th century saint known for his simplicity of life, his commitment to the poor and his spiritual reform of the Church. The example of another St. Francis is also telling. Francis Xavier, one of the first Jesuits, served as a missionary in India, Japan and beyond. Our home is the world, so the Jesuit saying goes. Francis’ election as the first pope from the Americas reminds us of the Church’s universality and its vitality in prayer and service far from the centers of power in Rome.

Yesterday was a big day for the man who was known simply as Jorge around his former home. But it was also a big day for all of us, Catholic or not. In both the applause and the silence of yesterday, we were reminded of our need to listen, to serve and to reach out in new ways.

Fr. Kevin O’Brien, S.J., is the vice president of mission and ministry. AS THIS JESUIT SEES IT … appears every other Friday.