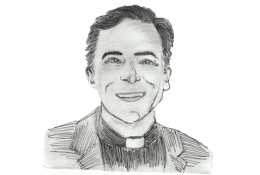 At a university, ideas matter. Here on the Hilltop, we have the privilege of learning about and wrestling with ideas that have percolated across the ages. We do this in conversation with great thinkers of the past and fellow students and teachers of the present. In this community of scholars, we express an idea so that we can really understand it, for it is only when we speak or write what is dancing in our heads that we truly make an idea our own.

Borrowing from ancient pedagogy, the first Jesuit schools back in the 1500s insisted on eloquentia perfecta. When striving for perfection of eloquence in writing, speech and performance, we grow in depth of thought and imagination. Eloquentia perfecta is also practical. Jesuit education is rooted in the conviction that ideas should have an effect in our world. The more well reasoned and persuasively expressed those ideas, the more effective they will be. In this way, learning becomes important not simply for its own sake but for the sake of others.

This fall marks the 50th anniversary of the opening of the Second Vatican Council. Soon after his election as pope, John XXIII surprised the Church and the world by calling a council to reflect on the Church’s role in the modern world. While upholding the ancient tradition of the Church, he also spoke of aggiornamento, updating Church teachings to meet the pressing needs of people both inside and outside the Catholic Church. In the fall of 1962, about 2,500 bishops and scores of observers — lay persons, theologians and representatives of other faith traditions — gathered in Rome. The council, which met annually each fall, would not close until December 1965.

Vatican II was an incubator and laboratory for ideas both old and novel. For four years, ideas were proposed, tested, validated, challenged and reshaped. What happened at the council has profoundly affected life at Georgetown. We live out the council’s hopes in our commitment to vibrant inter-religious dialogue and understanding, in our formation of lay leadership in the Church, in our preparation of worship that invites full and active participation, in our prayerful and thoughtful theological reflection on current issues and in our nurturing a faith that does justice. As Georgetown professor Fr. John O’Malley, S.J., reminds us, the council is significant not only because of what it taught but how it taught. The open, inviting, humble, inspirational and engaging style of the council served to ferment those great ideas and allow them to take shape.

For example, the council acknowledged the goodness of other faith traditions and paths to salvation outside the Catholic Church. The decrees called for renewed dialogue with Protestants, Muslims, Jews, Hindus and Buddhists. Taking the council at its word, Fr. Gerard Campbell, S.J., president of Georgetown in the years immediately following the council, hired our first rabbi — not simply to serve Jewish students, as he said, but to help Christian students understand who Jesus was as a Jew.

In another document, the council re-imagined the role of the laity in the Church and affirmed their gifts and their duty to serve both the Church and related institutions. Before Vatican II, Georgetown was mostly governed and administered by Jesuits. Today, Georgetown enjoys the many benefits of having both Jesuit and lay leaders laboring side by side.

Finally, Vatican II reinterpreted the Church’s commitments to human dignity and the common good for the modern age. That social justice is ingrained in the culture of the Hilltop is testament to the lasting inspiration of these ideas. They persist because they are continually adapted to meet concrete human needs, like the deficiencies of public education in the District, the injustices that migrants face and the disparity of access to health care here and abroad.

Today’s undergraduates were born after 1990, and many do not know what Vatican II is, something I am reminded of each semester when I teach “Church in the 21st Century”. Yet, they have an openness to learn about the council and are often pleasantly surprised by what they read. In a sense, they have been living the spirit of the council their whole lives, regardless of their faith tradition. Their experience confirms the resilience of ideas that they are just coming to know themselves for the first time.

Over the next four years, Georgetown will explore in a variety of forums the meaning of Vatican II for us today. The great council reminds us that ideas really matter and have an effect. So here at Georgetown, as in decades past, the Church will do its thinking, and each of us will contribute something to the river of tradition in which we wade, whose currents are the very ideas that matter to us all.

Fr. Kevin O’Brien, S.J., is the vice president for mission and ministry. He is one of the alternating writers for AS THIS JESUIT SEES IT…, which appears every other Friday.