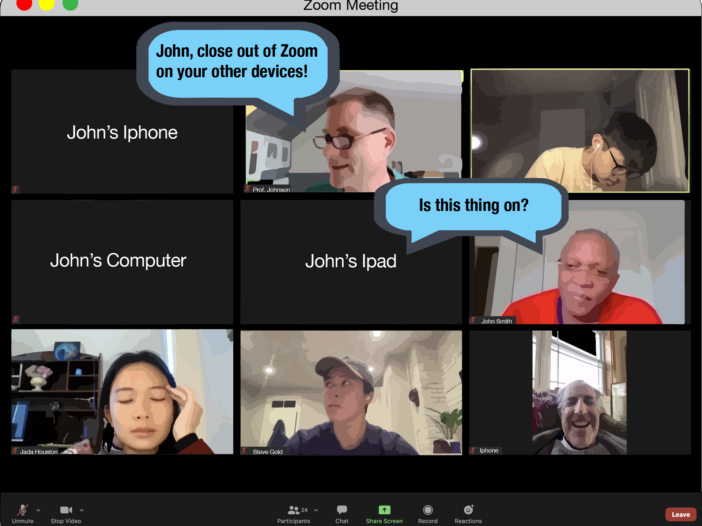 On the very first day Georgetown University classes went online in the spring 2020 semester, Ori Soltes, a professor at the Center for Jewish Civilization, had a lighthearted moment with a senior auditor in his class.

One senior auditor had accidentally left his microphone on during a Zoom class while taking a personal phone call, and a video of the incident was reposted on Instagram, according to Soltes.

“I kept saying, ‘Larry, Larry mute yourself. Larry, mute yourself,’ and one of my students actually videotaped that, and I learned the next day that it had gone viral — this, like, eight-second riff of me yelling, ‘Mute yourself, mute yourself,’” Soltes said in a Zoom interview with The Hoya.

The incident was not the only one: Soltes, who frequently allows senior auditors in his classes, had to explain how to mute on Zoom to a different auditor on another occasion. To Soltes, these technological obstacles made the virtual learning environment especially challenging for senior auditors.

“That was certainly, at the outset, a noticeable distinction between the seniors and the regular students — that there were many more people who were likely either to not be able to mute or unmute themselves,” Soltes said.

For just $30 a credit, Georgetown’s Senior Citizen Non-Degree Auditor Program offers people 65 and older living in the Washington, D.C. area the opportunity to take undergraduate classes in the College at the 400 level and below. Despite the difficult transition to distance learning, senior auditors have learned to adapt to the Zoom environment and forged stronger connections in the classroom with other Georgetown students.

For senior auditors like Monique Cohen, a former government employee and nonprofit founder, taking classes has been a way to stay intellectually active and return to the classroom after years away. Now in her third year of the senior auditor program, Cohen has taken classes in history, government, art history and music.

“I’ve approached it by using it as an opportunity to fill the gaps in my education that I never had,” Cohen said in a Zoom interview with The Hoya. “I come from New Zealand. We had a different system, and so I have been doing things that I wished I had done but never had either the opportunity, didn’t know the course existed or wanted to know more.”

Auditing can be a great way to stay active both socially and intellectually, according to senior auditor Charles Both (LAW ’68), a lawyer who returned to campus to audit classes in 2016.

“I started taking classes while I was still working, but just one class a semester because my wife had begun taking courses, and I’m just interested in history and current events,” Both said in a Zoom interview with The Hoya. “It’s a great opportunity for a retired person to sort of keep intellectually stimulated. I do the readings; I try to keep up.”

Under the program, participants must request permission from the professor to audit a class. Once an auditor has gained approval, they are allowed to sit in on classes without having any formal grading requirements, such as papers or midterm exams.

Though auditors are often encouraged to take a back seat during class discussions, they often have valuable insight to share about their own life experiences as they relate to class material, according to Soltes.

“One of my courses, which is called ‘Jews on Trial,’ the first time I taught it, I think I had seven or eight [auditors], and they were all retired lawyers sitting in the back row,” Soltes said. “I’m not a lawyer, so when there were nitty-gritty legal questions, I would turn to them and say, ‘What do you think about this? Am I getting this right?’ That sort of stuff can be particularly interesting.”

Auditing in the age of COVID-19 has a different dynamic, though, as senior auditors, alongside their younger classmates, have had to grapple with the difficulties of distance learning. Both, who is taking three classes this semester, has found pros and cons to virtual auditing.

“I think the experience of online is not quite as stimulating or great as in-person classes. I’m not enjoying it as much as I did before, but I guess you as students aren’t enjoying it either,” Both said. “But you know, especially in this COVID time — maybe not for students, but for retired people — it provides us a great structure to a day.”

Is This Thing on?

While the virtual learning environment presents challenges for all students, technological difficulties have dominated the auditing experience, according to senior auditor Jane Collins, who is taking “American Musical/Stage&Screen” with associate professor Robynn Stilwell. Despite her familiarity with computers, Collins said she was not prepared for the range of programs used in online classes.

“Being older, I’ve worked for years and years and years on computers, but everything keeps changing,” Collins said in a Zoom interview with The Hoya. “With this latest class, because it’s so multimedia, there have been a whole bunch of things that have been difficult for me to figure out, like how to get into the discussions or how to get film clips that the professor is posting.”

In addition to learning the ins and outs of Zoom, some auditors also had to tackle other online platforms like Canvas, the university course management website, or Panopto, a lecture recording software.

Georgetown is aware of the new tools seniors have had to learn to engage online, according to Jazmine Franco, the certifications and special program coordinator at Georgetown, who oversees the senior auditing program.

“While there are not many differences between online and in-person classes for auditors in terms of overall learning and curriculum, we know that our senior auditors are having to familiarize themselves more with the CANVAS tool as they participate virtually,” Franco wrote in an email to The Hoya.

While many auditors may be intimidated by new learning technology, most have been up for the challenge and continued to register for classes. Generally, enrollment in the senior auditor program ranges from 150 to 200 students every semester, and those numbers have remained consistent, with just over 180 auditors enrolled each semester during the 2020-21 academic year, according to Franco.

Collins and others have also been able to seek help by turning to tech support at Canvas when struggling.

“I’ve talked to the Canvas support people — the class actually has a student tech support person — and we’ve been back and forth. And it’s gradually gotten better. Who knows why, but it was very frustrating at the beginning,” Collins said.

Teaching assistants have also helped the transition to online learning by aiding students with technology whenever possible, according to Both.

“If there are issues with the tech stuff, the TA’s primary obligation is to support the technology, and I think that’s been fabulous in the sense that we haven’t had any glitches,” Both said. “I’m pretty fast with the computer, though. Other seniors are probably not, and I think that having somebody there to sort of troubleshoot and help them is a positive.”

For auditor Cliff Balkam, one silver lining to virtual learning is the ability to connect personally with professors and students. Balkam found the Zoom breakout room feature allows for more in-depth interactions with students compared to the traditional classroom environment.

“With the press of a couple buttons, suddenly you are in a group with four students,” Balkam said in a Zoom interview with The Hoya. “Unlike in the classroom where when you do that, you hear the conversation of the group next to you and you hear this babble and it’s distracting.”

For Collins, Zoom helps to see everyone’s faces and put a name to them, even if it sometimes prevents her from getting to know students on a personal level.

“I’ve really liked the fact that it’s a little easier, not to necessarily get to know the students, but at least to see them in a better way because if you’re in a [physical] class with them, they are either behind you or in front of you and you can’t see their faces,” Collins said.

Though some auditors are able to form connections with students individually, others seek to form broader relationships with the class as a whole. Building community across generations can be a wonderful way to share wisdom and differing perspectives, according to Cohen.

“What auditors bring is wealth of experience,” Cohen said. “How to negotiate your way through the career path, to know things like, ‘How do I approach an interview?’”

Inspired by the abundance of fellow auditors in her classes and drawing on her background running a nonprofit and women’s mentorship programs, Cohen hopes to build a network of senior auditors to mentor undergraduates in the future.

“I thought, ‘Here you are locked up in your little room doing online courses,’” Cohen said. “It’s hard to meet people, particularly those that are at home, so I thought of this as a way to create the same opportunities — that’s how I came to the idea.”

For some auditors, like Balkam, the connections made with undergraduate students can be one of the most rewarding aspects of the program. Balkam befriended an undergraduate over Zoom direct message in a course he took in the summer of 2020, and the two found so many common interests that they began meeting outside of the classroom.

“He’s a guy that I just like a lot and he evidently enjoys talking with old-timers like myself, and we have shared interests and shared curiosities,” Balkam said. “That’s one nice thing about Zoom. You can go back to third grade and pass notes in class.”

For Balkam, this ability to connect with fellow students has been one of the most valuable experiences of the senior auditing program.

“So even during COVID, I’ve been able to make an online friend — and actually analog, which is another term for offline — friend as well,” Balkam said. “In terms of my experience as an auditor, one of the big pluses, although I didn’t envision this going in, was making friendships or relationships with the undergraduates.”