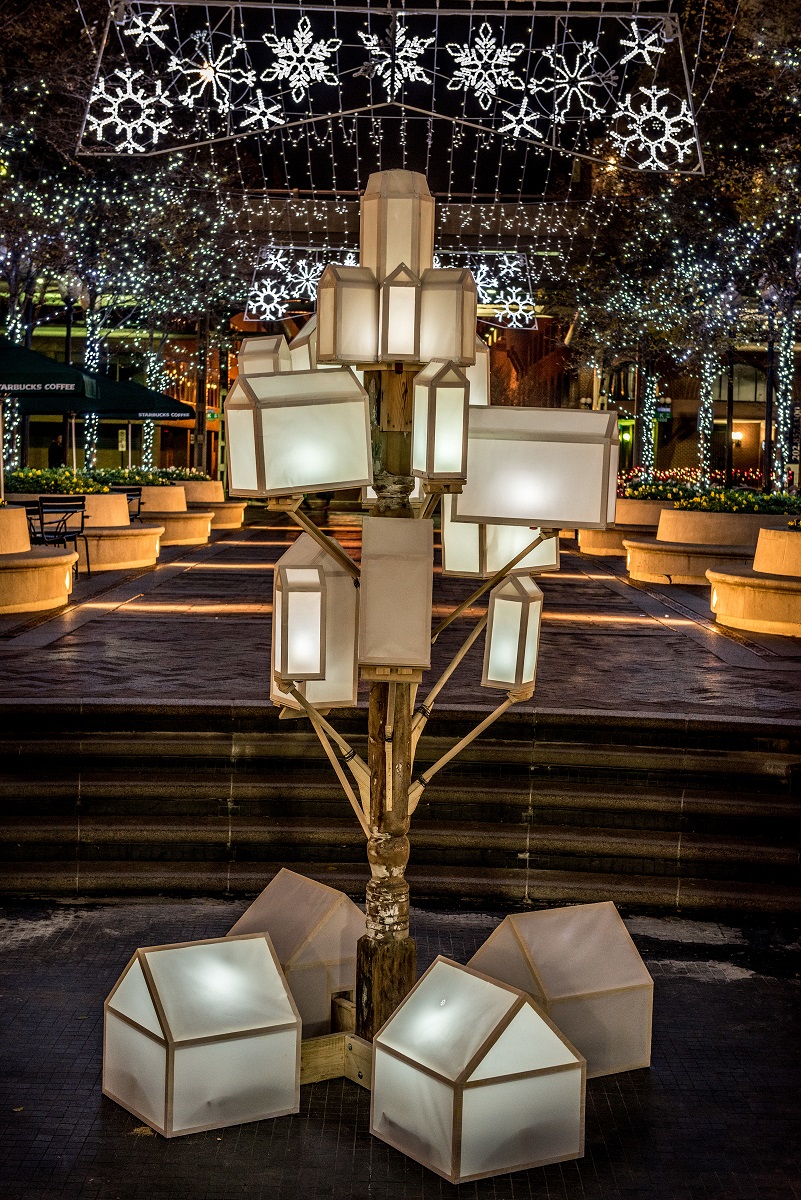 This year initiates the first exhibition of Georgetown GLOW. Sponsored by the Georgetown Business Improvement District, this project promises to become an annual tradition.

The outdoor display boasts seven very unique pieces as well as additional projections that explore the artistic effects of light. The pieces are sprawled throughout the Georgetown neighborhood, which means each work is only a walk away from campus. The event will be this weekend between Dec. 12 and Dec. 14 each night between 6 p.m. and 10 p.m. There will also be a performance by the Georgetown Phantoms on Saturday at 6:30 p.m. at Grace Church, located on 1041 Wisconsin Avenue NW.

Located at LSM Architecture office building, but it can be seen from 3333 M St.

Re: collective is a group that works with newer digital media and  integrates performance into its pieces. The work is viewable from across the street and it displays what seems to be shadows of individuals walking against an extremely bright glass atrium. This clever creation is made possible by the the footage the group recorded of individuals walking by, projected against the intense lighting. At first, it is difficult to recognize that this is an artistic piece if one walks by it quickly on M Street, but with another look, it is fascinating to realize that the people in the building are simply projections.

Alvarez’s work includes nearly 50 sculptures constructed of clear plastic film which emanate blue light from within. Inspired by D.C.’s background, Alvarez, a Spanish artist from Madrid, says her goal was to create a conglomerate of different cultural creations ranging in topic from the city’s history to its media. Her sculptures both blend into the street view as one, while simultaneously demanding attention with their bright color. Many of the figures she created are staged in everyday positions such as workers on a building and a couple at a cafe. Her sculptures are a reminder amidst the holiday spirit that even our ordinary experiences can be full of something special.

This piece is one of the most innovative at the exhibition as it connects the projection of two eyes with a cable of lights. Each time the eyes make contact, the cable lights up. Brian Davis, the artist explained that the lights are not pre-programmed to light at the specific times of the video during which the eyes are open. Instead, he utilized a technology that is able to recognize when the iris is in the appropriate frame and then react by lighting the cable. He also mentioned that many of the shots of this video are actually his and his wife’s eyes, and so the piece seems to be a clear exploration of human connectivity.

This work has a lot going on. Not only is the centerpiece a miniature Christmas tree roasting on a spit, but there are lights resembling the fall of snow rotating simultaneously. The artists mentioned that they wanted to both play with the idea of sacrilege by seemingly burning the tree, but to, more so, create a sense of childlike mischief. They chose the roast as a symbolic reminder of friends gathering to joke at one another out of love and humor rather than with malicious intent.

The Glow at Jefferson Court

Although it seems simple at first, this piece is a long, snake-like, contorted tube constructed out of connected buckets and held up by a set of wiring. However, the artist, Jason Peters, revealed many underlying concepts that instigated his project. For one, he hopes to invoke recognition of the human tendency to enjoy a pattern-like, structured life by consistently separating every two yellow buckets with a blue one. Additionally, he states that part of his fascination with putting such a large structure into a rather commonplace courtyard is its similarity to the memories we have of people; that is, the same way this tube has injected itself into the lives of those who must now walk through it, individuals inject themselves into our lives and, eventually, leave as the sculpture will.

The Floating Lab Collective, a group of George Mason University artists, are largely driven by social matters, and this notion is consistent with their work for Georgetown GLOW. They have created one of the oddest Christmas trees one may ever see by placing paper LED-lit house-like structures on the branches of their constructed tree. Four, larger, houses lay as the piece’s base. The work invokes serious considerations about economic and environmental housing concerns.

Zac Benson’s work is a rather large, home-like constructed from two-by-four planks of wood, and within the home is a set of extremely strong halogen lights that beam their light through the spaces between the wood. The piece reflects the energy and feelings that one has when in a home. Benson has also partnered with Habitat for Humanity on his projects in an admirable attempt to give back, and thus, when Georgetown GLOW is completed, the wood from his piece will be given to their efforts.

Not only is each individual piece in this outdoor lights display impressive and innovative, but the walk itself also is a very festive one. Checking out Georgetown GLOW is a great way of getting into the holiday spirit and exploring the neighborhood before heading home for break.