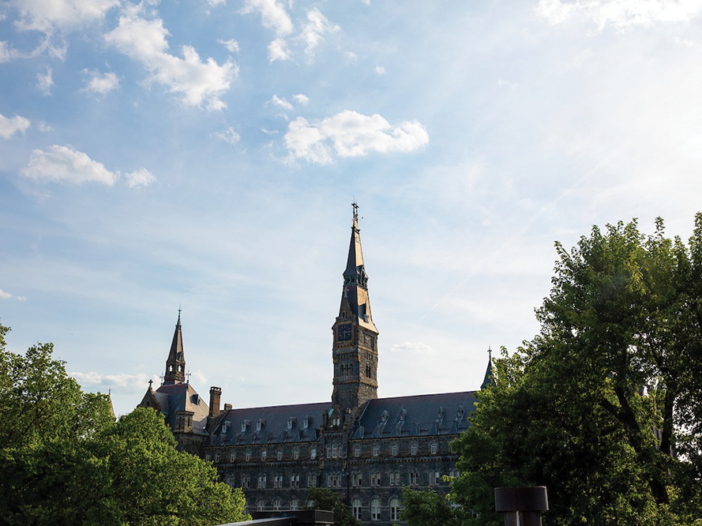 Universities have a responsibility to increase the representation of Asian American narratives, scholarship and faculty in academia, panelists said at an event held on April 16.

The virtual event, titled “Anti-Asian Racism: How Do We Move Forward?” was organized by the Edmund J. Walsh School of Foreign Service’s Asian Studies Program, the Office of the Vice President for Global Engagement, the Office of Institutional Diversity, Equity and Affirmative Action and the Georgetown Medical School Office of Diversity, Equity and Inclusion following a recent surge in anti-Asian hate crimes in the United States. The panelists discussed the importance of Asian American Studies programs and the inclusion of Asian American narratives into broader university curricula.

Asian Americans have historically been excluded from academic scholarship in the United States, according to Jenny Xu (COL ’21), the inaugural chair of the D.C. College Democrats AAPI caucus. Schools such as Georgetown University must expand the diversity of Asian scholarship and literature to not remain complicit in perpetuating Asian American erasure, Xu said.

“We know that there is strength in diversity, but there is an even greater strength to be found in integrating this diversity into our curriculum and by extension our institutional culture,” Xu said at the event. “We need courses in all fields to incorporate literature from Asian American scholars to establish norms of including Asian Americans in discussions of race beyond binary understandings, and we need to shake ourselves of complicity in Asian American invisibility.”

The lack of Asian American stories in U.S. history curricula perpetuates the stereotype of Asian Americans as an invisible model minority, according to Beth Lew-Williams, associate professor in the Department of History at Princeton University.

“It also matters what is not being taught. I think, in particular, I would highlight that we have to remember that absences in our classroom also teach our students,” Lew-Williams said. “I’ll pick on my own field, if we teach U.S. history, for example, without Asian Americans as historical actors in this narrative, the absence alone I think is teaching our students lessons, and not the lessons that we want to teach.”

The concept of Asian Americans as the “model minority” first arose in the 1950s and 1960s, when American media favorably portrayed Asians as “good minorities” who successfully overcame discrimination and assimilated to American culture, as opposed to other people of color who were treated as “problem minorities.”

The model minority myth can also place unrealistic expectations on Asian students to always be successful, and as a result, Asian students are often reluctant to seek help from university resources, David L. Eng, a professor of English and American Studies at the University of Pennsylvania said. Eng cited a Mental Health America report that found Asian Americans were three times less likely to seek mental health services than their white counterparts.

While universities have become more diverse, they still do not provide adequate mental health resources for Asian students who have to deal with the burdens of racism, according to Eng.

“Asian racism, and hate crimes in general, will not go away without proper education and counseling,” Eng said. “The space of the university today may be more diverse, but is it any less segregated?”

Other panelists at the event included Anges Lee (SFS ’17, LAW ’22) editor-in-chief of the Georgetown Law Review, Karthick Ramakrishnan, a professor in the School of Public Policy at University of California, Riverside and founder of AAPI Data, which publishes demographic data and policy research on Asian Americans and Pacific Islanders and Marita Etcubañez, the senior director of strategic initiatives for Asian Americans Advancing Justice, which seeks to advance the civil rights of Asian Americans through litigation, education and public policy advocacy.

Both in and out of the university setting, narratives of Asian racism are often oversimplified to become more easily digestible, according to Ramakrishnan. The media tends to focus only on instances of hate against women and the elderly, Ramakrishnan said.

“The reason why all of this is important is not to diminish the individual examples that we see seemingly on endless loop, but to not have this misleading notion that young people are not affected, that the native born are not affected, that men are not affected,” Ramakrishnan said. “They are not reporting it, not even to these community hotlines, suggests that we need to do a far better job at trying to understand the issue and knowing how to take corrective action.”

Hate crimes against Asians surged by nearly 150% in major U.S. cities in 2020 according to a report by Stop AAPI Hate, even as overall hate crimes fell by 7%. Women were 2.5 times more likely to be targeted than men and 7.3% of reported cases came from victims over 60 years old. However, youth under 20 years old were also disproportionately attacked, making up 13.6% of incidents.

Ultimately, Asian hate is not an isolated problem, so there is an obligation to take action, according to Lew-Williams.