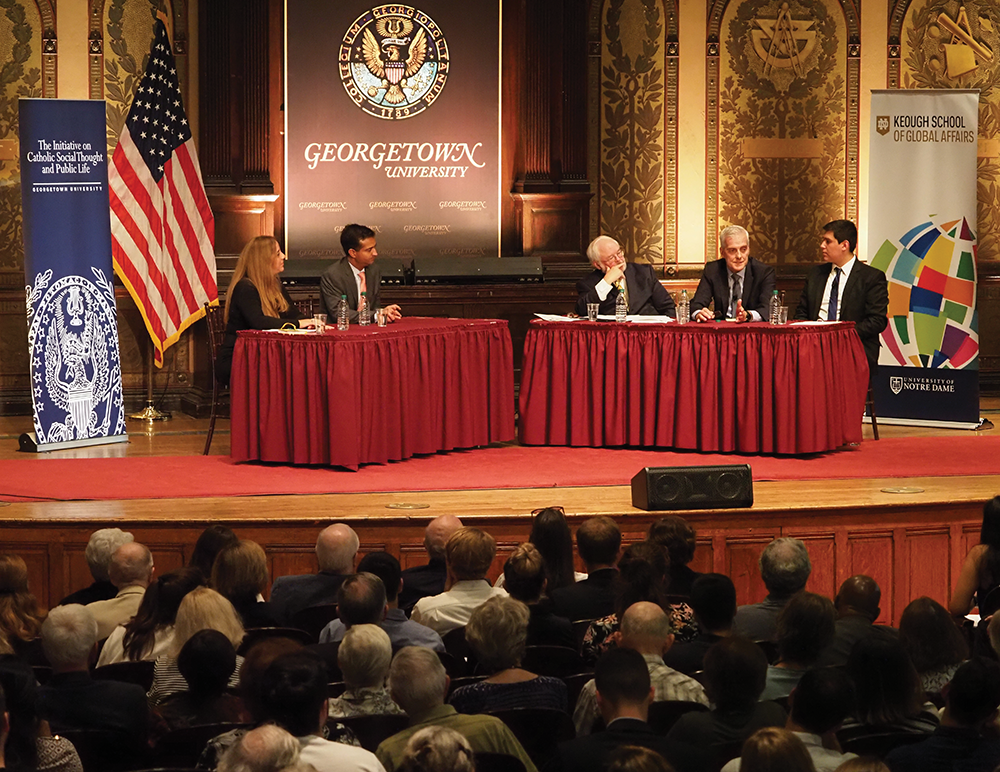 The debate around migration in the United States shifted from a bipartisan issue to a highly polarized one in recent years, but recognizing the impact on local communities could revitalize productive conversation, panelists at an Initiative on Catholic Social Thought and Public Life event said Wednesday.

Individual stories help Americans understand the hardships of both immigration and those affected by it here, panelists said. Belman Guerrero told the story of his family’s migration to the United States and how he swam across the Rio Grande despite not knowing how to swim before squeezing into a car with an American family to cross a border checkpoint.

This experience was difficult and intense enough by itself, but the emotional cost of living in the United States without legal documentation is high, Belman Guerrero said. He described how three of his grandparents have died without his family having the ability to visit them or attend their funerals without risking legal trouble.

After Belman Guerrero finished telling his story, McDonough focused on the reality that the extremes people must go to in order to cross the southern border does not prevent people from migrating because it is their best option.

“We know that the cruelty we’ve seen on the border does not deter people from traveling here,” McDonough said. “There are people who — we just heard an amazing story — who under significant pressure want something better for [their] kids — it’s something I want for mine, all three of them — and so cruelty is not a deterrent, that’s point one.”

While personal narratives are powerful in demonstrating the complexities of immigration, research and data-driven information can help counter xenophobic and racist narratives about migrants, Somers Landsberger said.

“We are really struggling with a research-based narrative that can counter that deep anxiety that people are feeling across America in welcoming the stranger across racial divides,” Somers Landsberger said.

Curbelo and McDonough both pointed out that history and data demonstrate how the premise that there is a particularly aggravated crisis right now ignores the reality that there have been varied migration crises throughout American history. McDonough told the story of his Irish immigrant family, who immigrated to the United States alongside millions of other Irish people in a time of strong anti-Irish sentiment.

Curbelo, who is from Miami, described the Mariel boatlift, when Fidel Castro announced that any Cubans wishing to emigrate to the United States were free to leave the port of Mariel. Over 125,000 Cubans arrived in Florida, according to History.com.

Curbelo, who is the son of Cuban refugees and led ultimately unsuccessful efforts to pass bipartisan immigration reform legislation while a member of the House of Representatives, emphasized the inherent tension in the migration debate.

“The United States has a right and responsibility to enforce its borders, to honor the rule of law, to demand that immigration to our country be orderly, predictable and such that it does not pose an undue burden on our citizens,” Curbelo said. “I think the other big idea we must uphold is that the United States should be a compassionate nation that welcomes people in need, that affords opportunity to those in faraway lands who don’t have the opportunity to cross one of our borders.”