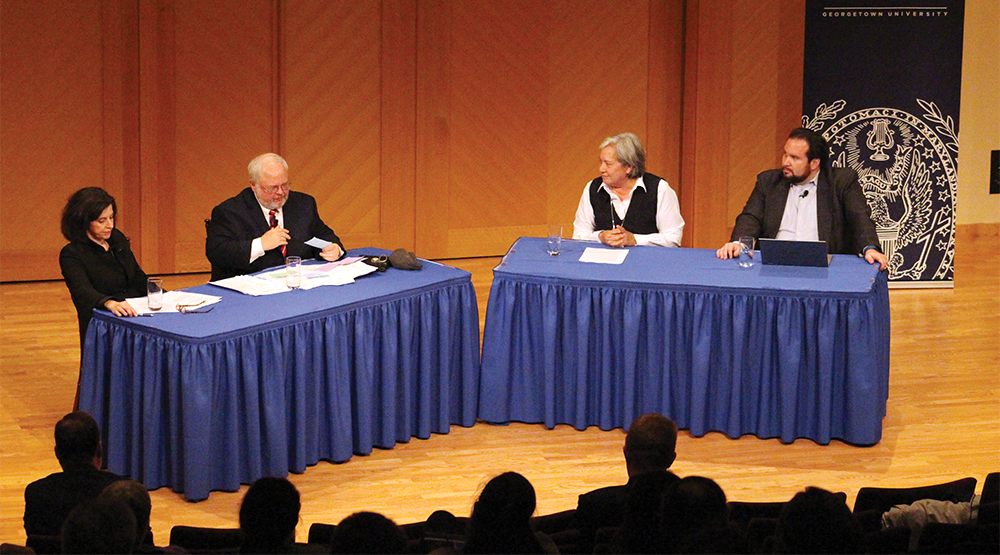 Immigration and anti-abortion activists advocated for the increased need to protect migrants, the unborn and other vulnerable individuals in the face of a prevailing “throwaway culture” at a discussion sponsored by the Initiative on Catholic Social Thought and Public Life in Lohrfink Auditorium on Tuesday.

In his opening remarks, University President John J. DeGioia said Georgetown is dedicated to free discussion and the open exchange of ideas.

“There’s a core set of values that animate an institution that calls itself a university. Among these values are academic freedom and freedom of speech and expression,” DeGioia said. “Respect for this ethos of openness is a condition for sustaining an authentic university.”

DeGioia also said the university is committed to the inherent dignity of all life.

“The work to systematically address the threats to life, the urgency of building a civil society with a shared vision of what human sacredness demands, continues to be our work today,” DeGioia said.

Before opening the discussion, Carr defined the ‘throwaway culture’ Pope Francis notes in his encyclical “Laudato Si,” and justified the Catholic response.

Alvaré, who founded the anti-abortion female empowerment campaign Women Speak for Themselves, contested the argument that abortion rights are tied to women’s health, autonomy and empowerment.

“Your own child is actually the key to empowerment. [Abortion] pushes so clearly against the tides of reason and it goes against the tide of a person’s natural inclinations to care,” Alvaré said. “When you base an argument for human rights on denying someone else’s, it just doesn’t fit. It’s not beautiful. It’s not pro-human. It can’t be pro-woman.”

The talk also centered on migrant issues. Pimentel said migrants are undervalued in the throwaway culture when they are turned away from a border crossing.

“They are fleeing and they come to us asking for protection. I don’t see how they are illegals or why we would not help them,” Pimentel said. “It’s hard to understand when somebody says, ‘No, we shouldn’t help.’”

Pimentel encouraged attendees to seek encounters with devalued individuals in society to reach their own conclusions about the inherent worth of life.

“Really engage yourself in seeing that face, that child, that mother, and make your own opinion on that, not from what you hear from others,” Pimentel said.

Camosy said immigrants, unborn children and animals are victims of the throwaway culture because society refuses to adjust its preferences to accommodate their dignity.

Georgetown Right to Life Co-Chair for On-Campus Service Mylan Metzger (COL ’19), who attended the event, said the discussion concerned her in advance of Planned Parenthood President Cecile Richards’ upcoming speech on April 20. The announcement of Richards’ speech, which is organized by the Lecture Fund, sparked ire among the local Catholic community in March.

James Pennell (SFS ’18), another member of Georgetown Right to Life who attended the event, said the Georgetown community should reflect upon its values in the abortion debate.

“I really think that modern society and Georgetown more specifically needs to really do some introspection, some serious moral reasoning to see where the truth comes down on this debate,” Pennell said.