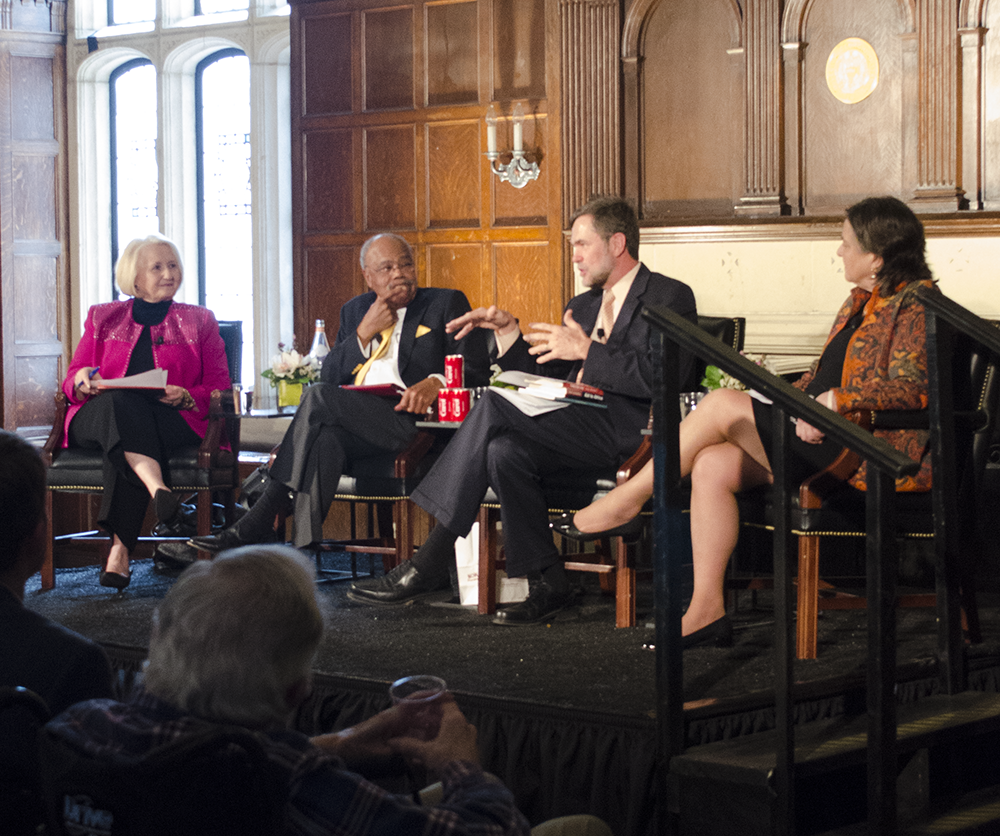 Lancaster served as SFS Dean from 2010 to 2014. After being diagnosed with a brain tumor in November 2013, she took a leave of absence before ultimately stepping down as dean in April. Lancaster died Oct. 22, 2014 at the age of 72 .

Vice President for Global Engagement and Berkley Center Director Thomas Banchoff opened the panel with a brief introduction paying tribute to Lancaster. The panelists then began their discussion of Lancaster’s scholarship in development, diplomacy and gender, focusing on how her intellectual and policy contributions related to the challenges of today.

McHenry said that Lancaster applied her rich experience in both the public and private sector into her work and cooperated with others in a pragmatic spirit.

“She used that experience, particularly her scholarship, in her own analysis of not only what’s to be done, [but also] how to do it,” McHenry said.

Radelet talked about his first meeting with Lancaster and his trip with her to the Ethiopian Peace Corps that members of Congress also attended. He praised Lancaster’s scholarly work on international aid and said that the GHD program students in the audience were Lancaster’s legacy.

“What she does in [her book] is systematically go through various donor agencies in the United States, Germany, France and Denmark that she looks through in terms of what drives foreign aid in these countries,” Radelet said. “To my knowledge, it’s the only comparative analytical book on foreign aid structures, on the institutions and politics.”

“She is one of the few people that I have come across to have the courage, the tenacity, the scholarly curiosity and the ability to just welcome everyone and treat everyone with incredible respect,” Radelet said.

Marshall characterized Lancaster as a committed teacher, a great friend and a leader in the research of gender issues.

“She was really an example that women can do almost anything and she would never have accepted that something could not be done,” Marshall said, “She was at the heart of the generation of women who led the thinking about gender issues.”

Marshall also listed out four unfinished items on Lancaster’s agenda: gender issue as a contemporary and continuing challenge, religion and politics of development, failing of weak states and the issues of ethics in development and diplomacy.

Verveer said that Lancaster’s political contributions saved the United States Agency for International Development in the early part of the Clinton administration and reemphasized her focus on the achievements of women.

“She understood the pivotal role that women played in development, not just in history but also as agents of change,” Verveer said.

Verveer then turned the panel discussion to some of the broader issues that interested Lancaster. For instance, Radelet talked about Lancaster’s early awareness of the institutional impact of policies.

“She was concerned not only about the short-term obvious benefits to save lives, which is great, but also what impact does this have on the broader institutions,” Radelet said.

Marshall said that Lancaster’s fusion of idealism and pragmatism in her study of Africa allowed her to forge advancements in her research.

“In order to move forward in a situation of governance challenges, social challenges, you really had to have the core political compromise and agreement that would allow you to be both practical and visionary,” Marshall said.

McHenry said that Lancaster understood the importance of the delivery of policy.

“She was under no illusion about what had to be done in order to create conditions for the development of Africa,” McHenry said.

Toward the end of the event, the panelists discussed Lancaster’s contributions to the Qatar campus and her unfinished administrative work. The panelists ended by each naming one of Lancaster’s major impactful contributions. The accomplishments that the panelists mentioned were Lancaster’s book on international aid, the GHD program, gender studies, ethics studies and the integration of various programs on campus.

GHD student Matthew Ramirez (GRD ’15) said he came to the event to pay his respect for Lancaster and to learn more about her various contributions in life.

“It was a show of gratitude and respect to be here knowing Carol’s role in the formation of this program, which I am very lucky and happy to be a part of,” Ramirez said. “I knew much less about her before I came. I think it’s been really exciting to hear what a large impact she has had on people, the school and institutions like USAID.”