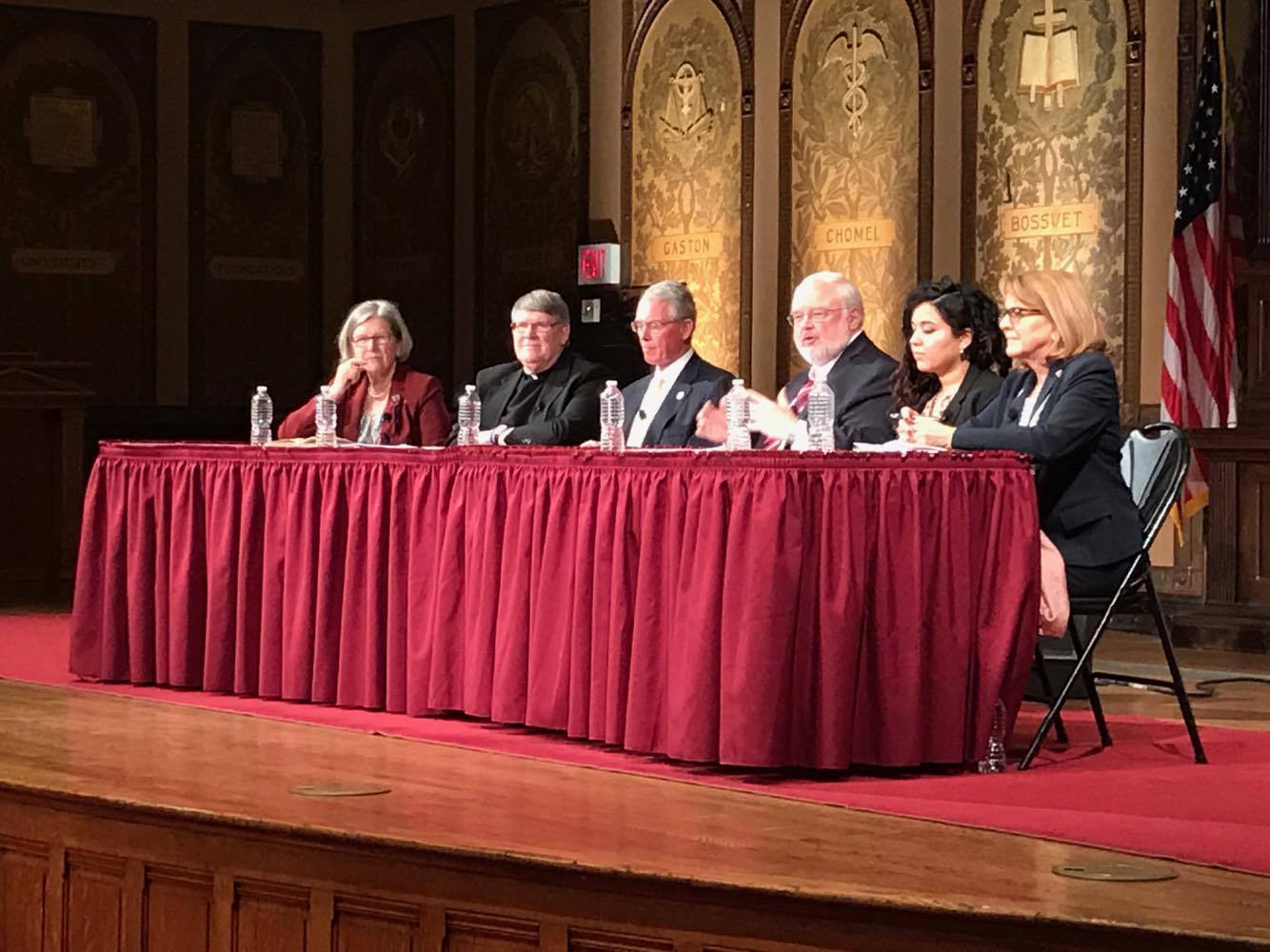 President-elect Donald Trump’s administration should embrace certain Catholic social values in order to help the poor and protect refugees, according to a panel discussion of Catholic leaders in Gaston Hall on Thursday.

Some of Trump’s economic and immigration policies came under fire during his campaign and following his November election victory.

Trump was criticized by some people after he called for a full ban on Muslim immigration in December 2015, while a Congressional Budget Office report released today said 18 million Americans could lose health insurance if certain parts of the Affordable Care Act, which subsidizes insurance for many Americans, were to be repealed. Trump has called for the ACA to be repealed and replaced with a new law to help insure all Americans.

The Initiative on Catholic Social Thought and Public Life hosted the event, “Faithful in a Time of Trump,” a week ahead of Trump’s Jan. 20 inauguration.

Despite reservations with some of Trump’s rhetoric, Monsignor John Enzler, president and CEO of Catholic Charities of the Archdiocese of Washington, said he hopes Catholic social principles might be given credence under a Trump presidency.

Joan Rosenhauer, executive vice president of U.S. operations for Catholic Relief Services, said in order for the Catholic community to interact with the government effectively, faithful citizens must be fully informed about Catholic teachings.

“To stand up for a government that is willing to be a leader in the world on development, and on refugees and on building peace — for our community to play that role, we have to be clear among ourselves and our bishops,” Rosenhauer said. “Our leaders have to speak out about what we teach and what the implications are for U.S. foreign policy and the role the United States can play in the world.”

According to Enzler, a fundamental principle of Catholic social teaching known as the preferential option for the poor can apply to policies addressing homelessness. This tenet requires Catholics to promote social justice and actively assist the poor in both prayer and action.

Enzler said Pope Francis’ visit to his parish, St. Patrick’s Catholic Church, during his 2015 papal visit to Washington, D.C., embodied this principle. Pope Francis chose to eat lunch with the homeless during his visit.

“What we lose sight of is 64 percent of the households living in poverty have at least one adult working full time. The issue is not poverty, the issue is wages,” Campbell said. “Our social safety net is built for those who have fallen on hard times, but is being used as a business subsidy.”

Kalmanovitz Initiative for Labor and the Working Poor Administrator Jessica Chilin-Hernández said a future Trump administration also puts Catholic teachings that promote the protection of refugees at risk. Trump said during his campaign he would repeal Deferred Action for Childhood Arrivals, an executive action that Trump can overturn without needing Congressional approval.

President Barack Obama introduced DACA in 2012 to increase the number of deportation exemptions for immigrants who were brought to the country illegally before their 16th birthday.

“If we are to take seriously the idea of Imago Dei, that is, the image of God is reflected in our human likeness in all of its diversity, then we are called to care for our refugee, asylum-seeking and migrant neighbors in the same way we would also care for God,” Chilin-Hernández said.

Policymaking around immigration requires the mediation of two Catholic values, according to Rooney.

“How do we balance the conflicting values of protection of human rights, protection of migrants and unifying families, which is at the core of Catholic social teaching, with an equally important concept of state sovereignty, the Westphalian state and respect of territorial boundaries, which the Vatican also supports and has ever since Charlemagne?” Rooney said.

Erica Lizza (COL ’19), who attended the event, said the event emphasized the importance of working together to create progress during the Trump administration.

“We need to find the areas we agree on and can work towards with the new president and the new Congress,” Lizza said. “And not give up on the areas in which there are serious disagreements.”