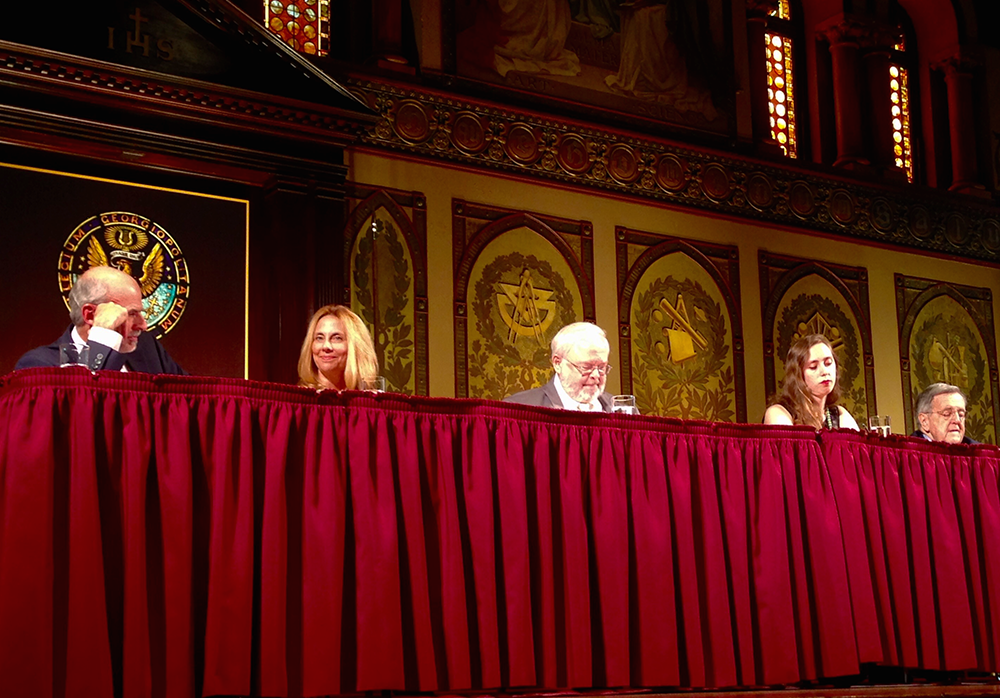 Less than two months before the presidential election, anger continues to brew among the American electorate partially due to the lack of honesty from Democratic candidate Hillary Clinton and Republican candidate Donald Trump, according to a panel sponsored by the Initiative on Catholic Social Thought and Public Life on Tuesday.

Director of the Initiative on Catholic Social Thought and Public Life John Carr moderated the event. According to Carr, this year’s presidential campaign has been driven mostly by anger instead of money.

“It’s been an unusual year,” Carr said. “It’s been a year where, in some ways, anger and movements have mattered more than money.”

Seib said this anger is rooted in economics, corrupt institutions and a broken political system.
“The two most powerful emotions in politics are fear and anger: a fear of the future and an anger at the present. And that’s I think where we are,” Seib said.

“I think it turns out that venting constantly, instead of being cathartic, just leads to more venting,” Henneberger said.

Many polls point to a theme of resignation among voters who prefer neither candidate, according to Green.

The polls for this election also include a new fourth response. In the past, the most common responses included were either “Candidate A,” “Candidate B” or “I don’t know.” This year, however, a fourth answer was added: “neither,” due to the large partition of the population who have made purposeful decisions to not vote for either candidate because of a strong dislike of both Clinton and Trump.

Henneberger said voters do not trust politicians because of their dishonesty. Bernie Sander’s (I-Vt.) popularity during the Democratic primary exemplified this fact, according to Henneberger.

“In American politics, someone, like we saw with Bernie Sanders, could do very well trying something way out of the box, like telling the truth and letting the chips fall,” Henneberger said.

Shields said both Clinton and Trump tailor their speeches based on whom they are addressing in an effort to appease voters — further confirming their dishonest images.

“They are saying what they think the group wants to hear, to please them. It’s a terrible, distorting, contorting experience,” Shields said.

“They’ve really thought about faith; they have an idea. I think you could have a very interesting faith conversation between Tim Kaine and Mike Pence,” Seib said. “I find it hard to imagine what the faith conversation would be between the two presidential candidates.”

Despite the lack of focus on religion from the presidential candidates, Shields said religion still plays an important role in presidential politics.

“There wouldn’t have been an abolitionist movement in this country but for the Quakers, the Anglicans and the Methodists. There wouldn’t have been an anti-war movement or a women’s movement but for the churches,” Shields said. “Religion and politics had their troubles, but America is a far better place and a far more just place because of the political engagement of committed religious Americans.”

“I thought that it was really refreshing. Everything they were saying about how we can learn lessons from this election and how all of the longer-term boiling emotions of anger and distrust can form how we make decisions about politics and change the discourse for the future,” Koo said.

Alexis Larios (COL ’18) said he appreciated that the panelists addressed the election from a Catholic perspective that she had not previously considered.

“I think a lot about how my other identities intersect with my voting, but I never think about how my Catholic identity intersects, so it was interesting to hear that side revealed and how other Catholics are dealing with that,” Larios said.