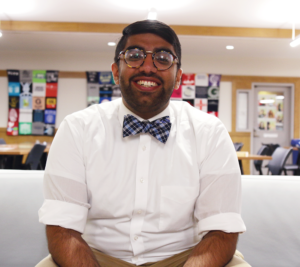 According to my Campus Housing Roommate Matching System profile, I hoped to find a roommate who was willing to “ignite a spark of energy within me,” talk with me for “hours about the eccentric nature of time” and support my purpose here, which was to “leave a lasting impact through every encounter.” Other requirements included undying love for french vanilla cappuccinos and Thai food, wanting to play mind games and, of course, appreciation for my hilarious and punny remarks. Yikes.

The fact that I have made any friends at Georgetown University is truly a surprise. In many ways, Georgetown fulfilled these wide-eyed expectations I had for my college years, providing me with energy, community and affirmation. In other ways, it did not. Reflecting on my last four years at Georgetown, I found that every experience taught me something, even if that lesson was not what I wanted. I started my years feeling lonely, unsure of myself and wanting to please others. The spaces I was a part of, though, allowed me to break out of that and more confidently express myself regardless of what others think.

The first few weeks of freshman year, I felt extremely lonely. Many of what I thought were inseparable friendships from my pre-orientation program faded away. I slowly realized that relationships I had formed were short-term and temporary, just like the satisfaction of an O’Donovan Hall meal. I spent lots of time anxiously waiting for people to respond to text messages to hang out with me. The loneliness was exacerbated by the fact that I felt like I was not pursuing the right academic or extracurricular track, either. A professor told me that my interest in Culture and Politics was not serious enough, and I got rejected from every acappella group I auditioned for.

Fortunately, balanced with the long nights of tears and frustration, freshman year was also the start of special relationships that will last beyond my time here. I was able to connect with the Ismaili Muslim community in Falls Church, Virginia, where I made some good friends and started teaching religious classes to sixth graders whom I got to know really well. Being there reminded me of being home and allowed me to sustain my connection to my faith, which defined so much of my life before Georgetown. I was still counting down the days, though, to go back to Texas.

These sentiments of loneliness and self-doubt naturally continued throughout the following years, but I found communities and spaces that taught me how to deal with them. The Alternative Breaks Program, ESCAPE Retreat, Campus Ministry, and Senior Capstone were spaces where I could feel what I was feeling and be myself most. They helped me realize that progress was not about getting rid of these feelings and doubts, but rather working through them.

Feeling confused about whether or not I was happy at Georgetown was especially hard for me because I went through high school thinking that I always had to be happy and comfortable. My optimism was often ingenuine. Georgetown gave me spaces to be joyful and feel sad, frustrated, angry and lonely at the same time, recognizing these feelings as important and necessary in order to flourish.

I also started taking my frustrations with Georgetown into my own hands. Engaging with organizing on campus gave me the chance to contribute to making this predominantly white institution more welcoming for students of color, advocating to move from preaching diversity to practicing real equity. I challenged curricular and administrative choices that were Islamophobic and Eurocentric, not holding back from raising attention to biases and norms existing inside and outside the classroom.

Organizing gave me the confidence to be more fiercely me, unafraid of going against the blue and gray norms of Georgetown to add my own color. Georgetown benefits from students conforming to practices understood as given because changes are difficult and costly to make, but I was grateful to find a community here resisting that.

Communities, however, were not always easily made at Georgetown. It upset me that even in small classes I knew the opinions of students on surveillance policies and World War I but knew nothing about them, sometimes not even their names. This semester I sent out an email to both my seminar classes offering dinner at my house because I felt like we were missing out on valuable relationships. While only five people from a group of forty actually responded and the dinners did not happen, I did not care what people thought about the email. Being able to assert friendliness in a space where it was discouraged or weird made me feel more like myself. Freshman year me would never have done that.

While my postgraduation plans are still unclear, I am open to new experiences and uncertainty, something I was not so open to before. I am still content, patiently waiting for the next adventure. Why should what I do next in my career matter more than the person that Georgetown helped me become?

I’ve decided to embrace my punning abilities, my desire to say hello to strangers in elevators and in class, and my asking unusually deep questions to people I just met, and that is good enough for now. Georgetown’s preprofessional culture taught me exactly what I didn’t want to be. Georgetown’s campus ministry, social justice-oriented organizations and warm people taught me. Despite its flaws, I “Healy” love the Hilltop, and parting ways is going to be harder than I once thought it would be.

Aly Panjwani is a senior in the School of Foreign Service.