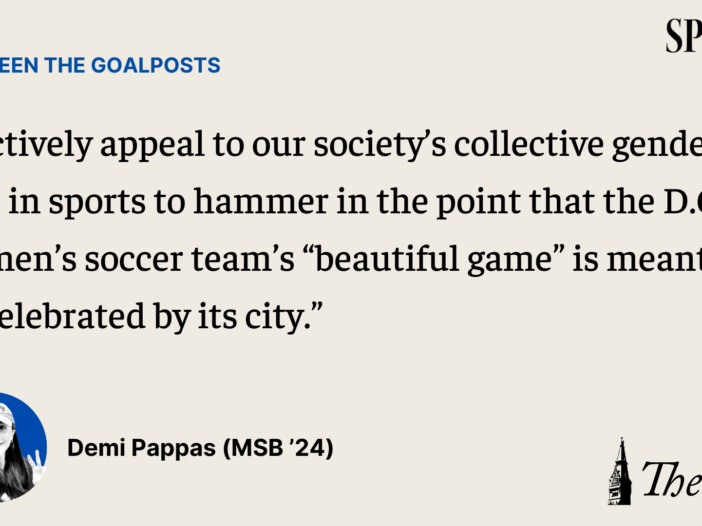 Audi Field, on a Saturday night, is an electric place.

Audi Field is electric for many reasons: the grandeur of an open-air professional sports stadium, the beat of the drums from the Spirit Squadron, the soccer balls flying every which way during warm ups. But really, it is the intangible feeling of knowing you’re about to witness greatness, about to witness spectacular soccer that will leave you in a trance hours after the final whistle.

The Washington Spirit’s dominant 2-0 win over NJ/NY Gotham FC on Sept. 17 induced such a feeling.

I am embarrassed to admit this past weekend was my first time visiting the stadium. Audi Field is a mere five-minute walk from Nationals Park and the developing Capitol Riverfront adjacent to Navy Yard. I am a soccer person, I’ve lived in Washington, D.C. for three years and yet I hadn’t made it to a single Spirit game.

I hope you don’t make the same mistake.

I can’t describe the Spirit’s play as anything other than tenacious. They were relentless, possessing the ball for the bulk of the match. Forward Tara McKeown made her presence known with a poised shot on an open goal. 2021 National Women’s Soccer League (NWSL) Rookie of the Year Trinity Rodman was a beast, turning on her speed at the drop of a hat. The back line was calm and composed, with hardly any missteps despite missing two starting defenders.

Although the Spirit’s season will be ending without a playoff run this year, the team is poised to be championship contenders in 2023.

The past two years have been tumultuous for the Spirit, to say the least. It is amazing in and of itself that the team won the 2021 NWSL Championship amid a Game Of Thrones-esque battle for ownership. The saga began in August 2021, when reports surfaced that then-Head Coach Richie Burke fostered a toxic work environment. Burke was fired that September, following an investigation by the NWSL. Immediately, fans from across the league called for former owner Steve Baldwin to sell the team.

This led to a months-long tug of war between Y. Michele Kang and Baldwin, who was spitefully favoring a $10 million deal with billionaire Todd Boehly even though Kang was offering $35 million.

Kang acquired the controlling interest in the team March 30, making her the first woman of color to become a majority owner of an NWSL franchise.

As an entrepreneur and disruptor in the U.S. healthcare system, Kang has brought unbridled passion to women’s professional soccer. Her big-picture goals for the franchise include building a permanent professional training facility, developing a world-class sport business operation and acquiring national sponsorships.

Kang said her goal is to transform the Spirit into a premiere franchise.

“Our ambition is to not only be the best women’s soccer team in the world but the best sports team, period,” Kang said in a Spirit press release.

The revitalization of the Spirit as a franchise is coming at the perfect time, with women’s soccer growing both at home and internationally.

A Sept. 17 match between Angel City FC and the San Diego Wave set NWSL attendance records with a sold-out stadium of 32,000 seats. In July, the world witnessed England spectacularly win the Women’s Euros at Wembley in front of 87,000 live fans.

Sept. 17 may have been my first Spirit game, but it will certainly not be my last.

The reason? The Spirit competed for each other. They played fun, entertaining soccer. They possessed the ball like Tottenham and ran faster than Kylian Mbappé. Their foot skills rival any unnamed Argentinian superstar and their attacking speed was faster than Di Maria.

I shouldn’t have to make these comparisons to convince you that women’s soccer is entertaining. That it’s just as — if not more – compelling than any MLS game.

But I do. I actively appeal to our society’s collective gender bias in sports to hammer in the point that the D.C.’s women’s soccer team’s “beautiful game” is meant to be celebrated by its city.

So, come celebrate it. Tickets to the club’s final home match on Saturday, Oct. 1 are free for college students. I know I’ll be there.