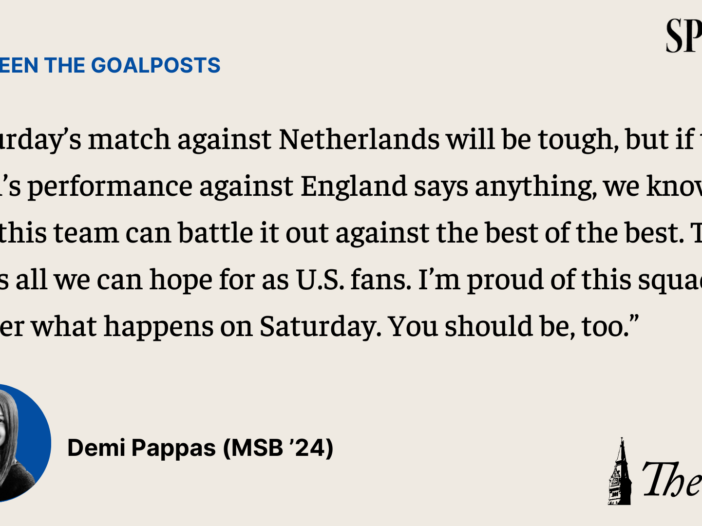 If you’re like me, Tuesday afternoon classes were a wash. I truly cannot recount anything I may have learned during my 2 p.m. marketing class. Instead of looking at my assignments on Google Docs, Fox Sports filled my computer screen (at low brightness and with one AirPod hidden under my hair) as I watched the U.S. earn a gritty victory over Iran.

There’s something special about watching the World Cup while you’re in class. It’s thrilling: you feel like you’re getting away with something sacreligious. It’s a guilty pleasure I know many of my peers find relatable.

I kid, I kid. Still, my point remains: the World Cup and our USMNT have consumed my days. How could they not? USA’s hard-earned 1-0 victory over Iran was an electrifying match—all 99 minutes.

The goal itself was a beauty. Weston McKennie lofted a cross to an expectant Sergiño Dest who then, in a textbook header, sent it across the goal to a diving Christian Pulisic. Putting his body on the line, Pulisic crashed into Iran’s keeper Alireza Beiranvand as he scored.

The goal’s celebration was cut short, as Pulisic went down in severe pain for three minutes after the collision. Despite being helped off the pitch by two medics — and being taken to the hospital for a pelvic contusion — Pulisic assured fans that he will be back for the U.S.’ Saturday match against the Netherlands via Snapchat. Twitter, of course, has cheekily decided to refer to it as something else entirely.

“So f*****g proud of my guys. I’ll be ready Saturday don’t worry,” Pulisic wrote in a Snapchat selfie caption from his hospital bed. The image has since become a viral meme.

While Pulisic undoubtedly saved the day and earned his new moniker “Captain America,” his success story goes far beyond him.

First, we must talk about fullback Sergiño Dest. He may as well be called Roy Kent, because the man was everywhere! Against Iran, he was arguably the fastest man on the pitch, weaving through defenders and wreaking havoc. He did such a spectacular job at getting up in the attacking third that I didn’t realize he was in the back line until Alexi Lalas, former USMNT player and now Fox Sports analyst, pointed it out at the half.

After subbing in for Pulisic following halftime, Brenden Aaronson was a menace in the left wing position. Captain Tyler Adams saved the day in the midfield left and right. And birthday boy Yunus Musah, who turned 20 years old on gameday, dominated the middle-third of the field, playing with technical poise far beyond his years.

Advancing out of group play bodes well for U.S. Head Coach Gregg Berhalter. Hired after the team failed to qualify for the 2018 World Cup, Berhalter was tasked with bringing the USMNT back into relevance and ushering in an era of young talent. Earning a spot in the Round of 16 eases some of the pressure from Berhalter.

Honestly, I like Gregg. He has a calming presence, especially after the forced tenure of Bruce Arena and the team’s tumultuous five years under Jürgen Klinsmann, whose name gives me uncomfortable flashbacks at its mere utterance. He’s made some smart coaching decisions in the tournament, like how the U.S. handled the formidable England squad.

Still, I have my qualms. Principally, where is Gio Reyna? The 20-year-old Dortmund attacking-mid is one of the brightest young stars on the squad, and he was poised to play a large role in Qatar. Instead, he has only appeared for 11 minutes at the end of the match against England.

I’m not the only one asking this question. Reyna’s omission from gameplay is haunting the nation.

In the aftermath of Reyna’s lack of minutes, PR messaging has been mixed. Berhalter initially claimed Reyna sat out due to a hamstring injury, while Reyna said he was “100% healthy.” The obfuscation may be tactical, as Berhalter pulled the same stunt with Pulisic in qualifying. But to believe this claim would be overly optimistic. Reyna’s status has now become “A Thing,” and in interviews, Berhalter seems visibly annoyed by the line of questioning.

This wouldn’t be as much of a fuss if the U.S. wasn’t in need of some bolstering — on the offensive side, that is. The backline has conceded just one goal, and none from open play, in these three matches. Against Iran, center backs Tim Ream and Cameron Carter-Vickers were a brick walled defense, and Walker Zimmerman’s 81st minute substitution proved to be crucial. The man won four headers in a row and made a heroic clearing in front of an open U.S. goal in the 98th minute!

Saturday’s match against Netherlands will be tough, but if the team’s performance against England says anything, we know that this team can battle it out against the best of the best. Truly, that’s all we can hope for as U.S. fans. I’m proud of this squad, no matter what happens on Saturday. You should be too.

Demi Pappas is a junior in the McDonough School of Business. Between the Goalposts appears online every other week.