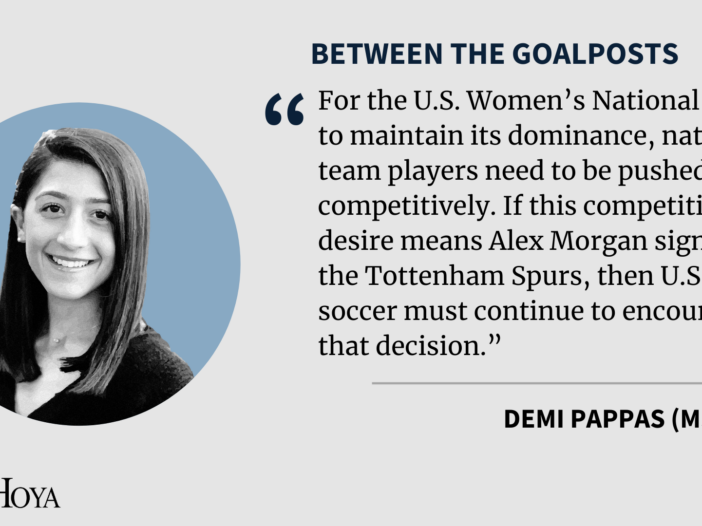 As the Football Association Women’s Super League gears up for the 2020-21 season, Orlando Pride forward Alex Morgan is the most recent of the U.S. Women’s National Team stars to go abroad with her signing to the Tottenham Spurs. The exodus began when Manchester City acquired midfielders Rose Lavelle and Sam Mewis, which was shortly followed by Manchester United’s adding forwards Tobin Heath and Christen Press to its roster.

The departure of U.S. players has direct implications for the National Women’s Soccer League. While players can be under contract for two clubs simultaneously because of different season start dates, the schedules still overlap significantly. The preseason for the NWSL begins in early March, and Tottenham Morgan will have to make the decision whether or not to extend her stay in London through early May.

For national team members, signing with European clubs provides an exciting opportunity to compete in a challenging environment. In an interview with ESPN, Press said, “I think it is one of the things I love the most about the game is how it offers the opportunity to always learn, to always get better.” The same sentiment was echoed by Heath, who has spent the last seven seasons with the Portland Thorns. Heath told ESPN, “For the growth of our players I think it is crucial [for players to go overseas].”

Selfishly, a part of me wishes Morgan would stay in Orlando, Fla. The experience of watching her dance on the ball in person is too extraordinary to pass up. But as a U.S. soccer fan, I am thrilled. After all, why wouldn’t I want my country’s national players to be at their best?

This development poses a possible dilemma for the NWSL. Teams have to start their seasons without integral players, who then abruptly return part way through the season. But overall, the attitude surrounding  playing for multiple clubs is positive. Orlando Pride Coach Marc Skinner said, “It’s almost a way for us to see and experiment with players we don’t know so much about.” And he’s right: Without Morgan in the center forward spot, the team can explore different offensive lineups. Skinner is smart for recognizing this possibility, and Orlando will become even more dangerous up top.

The practice of USWNT players overlapping their commitments first began in 2016, when Carli Lloyd signed with Manchester City and Morgan with Olympique Lyonnais. At the time, both were criticized for leaving at a crucial moment in their equal pay battle with the U.S. Soccer Federation. Sports analysts still continue to chastise players for supposedly draining the NWSL of talent; some even use this choice in an attempt to discredit the validity of the U.S. women’s compensation lawsuit.

Here lies a blatant double standard in U.S. soccer culture. Stars like Christian Pulisic and Giovanni Reyna of the U.S. Men’s National Team are hailed for their moves to Chelsea and Borussia Dortmund, while Lloyd and Morgan are deemed egocentric. The men’s actions are seen as patriotic and inspiring: The more they develop, the more they can contribute to USMNT success. Why should the women be deprived of this same outlook?

To better understand the value of playing in Europe, take a look at the USWNT’s history. With four World Cup titles and four Olympic gold medals, they are objectively the most successful team in women’s soccer. As the reigning 2019 World Cup Champions, the USWNT has been ranked first internationally by FIFA since June 2017. Comparatively, the U.S. men enjoy no Olympic medals or World Cup titles, and failed to qualify for the 2018 World Cup.

The team’s dominance doesn’t just happen as a result of complacency: A large part of the team’s success can be attributed to players’ going abroad to compete at the highest levels to improve. While the NWSL relies on national team talent, European soccer gives players a competitive edge that contributes to U.S. dominance. Current USWNT Coach Vlato Andonovski knows that playing in European leagues is beneficial for US teams and supports moves abroad. The rise of Crystal Dunn is a prime example. The last to be cut from the 2015 World Cup roster, Dunn was determined to make waves in the league that summer. She proceeded to score 15 goals for the Washington Spirit and was awarded the Golden Boot, a spot on the Best XI and the league’s MVP title. In the past five years, she has become a USWNT regular, with 24 goals in 104 appearances, and was an integral part of the team’s 2019 World Cup win in France.

For the USWNT to maintain its dominance, national team players need to be pushed competitively. If this competitive desire means Morgan signs with Tottenham, then U.S. soccer must continue to encourage that decision. I will, even if it deprives me of seeing my favorite players in action. There is value in teams deepening rosters and minimizing dependency on stars. Fans should support women playing abroad, not just men, as it only progresses the overall U.S. soccer culture.