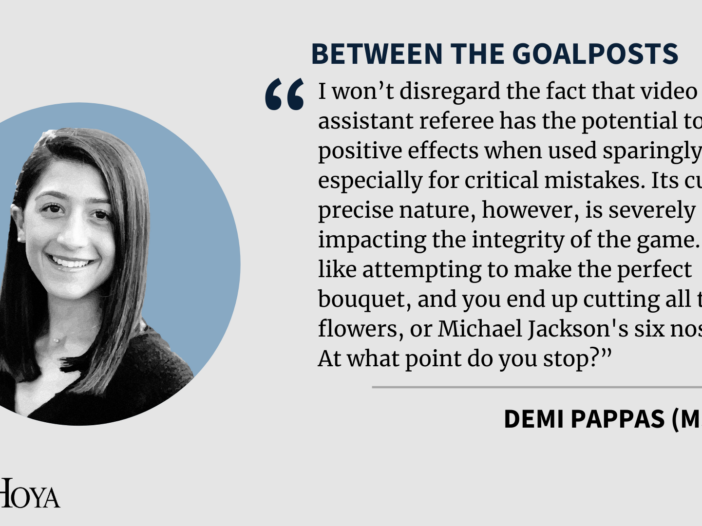 Crystal Palace’s recent 4-1 win over Leeds United marks the latest in a string of video assistant referee, better known as VAR, controversies in the English Premier League. Leeds striker Patrick Bamford believed he had tied the game 1-1 in the 16th minute. Instead, his goal was denied after video referee technology deemed his arm to be offsides. Yes, his arm: Bamford was pointing to where he wanted the ball to be played. As a result, his goal was disallowed after VAR review.

This incidence, facetiously referred to as “armpit offsides,” is becoming bafflingly commonplace in Premier League matches. In a post-game interview, Bamford told BBC, “I don’t understand the rule. You can’t score with your arm.” He went on to say VAR is “ruining football. … To have it ruled out for something like that is daft. Even the referee couldn’t make sense of it.” After the match, Bamford drew sympathy from the greater soccer community. Even Crystal Palace manager Roy Hodgson disagreed with the call. To ESPN, Hodgson succinctly commented, “It’s quite cruel.”

There has hardly been a Premier League match this 2020-21 season that has gone by without a VAR controversy. From Manchester United’s penalty after full-time Sept. 26 to Liverpool goalkeeper Fabinho’s penalization for stepping an inch over the line Oct. 24, VAR has dominated coverage. As of Nov. 9, a total of 37 goals or incidents have been directly impacted by the video referee. Its influence on league standings is most evident in net scores. Everton and Sheffield United have each gained three goals from VAR overturns, while the Tottenham Hotspurs have lost three goals and Liverpool has lost four.

Though extremely influential, VAR’s presence in the game is relatively recent. Following an extensive trial period, VAR was written into the Laws of the Game by the International Football Association Board in 2018. The video assistant referee is defined as “an assistant referee in football who reviews decisions with the use of video footage.” The first competition to use VAR in full was the 2018 FIFA World Cup in Russia, and it has since been adopted by most top European football leagues, including Italy’s Serie A, the German Bundesliga, Spain’s La Liga and the English Premier League.

In the Premier League, VAR is used to review goals, penalties, red cards and mistaken identity. While it operates under the philosophy of “minimal interference, maximum benefit,” it has drawn extreme criticism by fans and players in just two seasons for how pedantic it can be on rulings. This attitude is reflected in a tweet by former England player and current television commentator Gary Lineker. Lineker articulated his frustration by posting, “Sick of VAR. In its present state it is killing the game. It’s being used to referee the game rather than something in the background to correct the absolute howler.”

VAR’s impact also goes beyond match results and league standings. The constant game pausing conflicts with the fast and furious brand of English soccer. A recent YouGov poll found that “67% of 1,396 adults who regularly watch the Premier League said that the matches were less enjoyable since the introduction of VAR.” This statistic is unsurprising. Unlike the endless timeouts in basketball or the choppiness of the NFL, soccer is a game of few breaks. The sport is dynamic: A 90-minute match should mean 90 minutes of play.

Along with halting natural flow, the video referee strips the game of its nuance. The New York Times journalist Tariq Panja points out “some decisions, like offsides, are grounded in fact while others are always likely to retain a degree of subjectivity.” For example, incidences like fouls have varying degrees of severity: They are more about each referee’s personal interpretation. A foul that can be considered careless to one referee may be considered excessive force to another. Physical contact also differs across competition, as the Premier League maintains a more flexible attitude to fouls compared to other leagues. VAR fails to recognize this difference, instead painting every incident with the same broad stroke.

There is also something to be said for the artistry of the Premier League. VAR’s strictness discourages craftiness, which is a part of the league’s charm. A match would be incomplete without the mind games: the tugging of jerseys, the jockeying on free kicks and, as frustrating as they are, the flops. These little moments make up the character of the game and, in turn, define how it is taught and played. Do we really want to lose these moments in an attempt to achieve self-proclaimed accuracy, which one could argue may never exist?

I won’t disregard the fact that VAR has the potential to have positive effects when used sparingly, especially for critical mistakes. Its current precise nature, however, is severely impacting the integrity of the game. It’s like attempting to make the perfect bouquet, and you end up cutting all the flowers, or Michael Jackson’s six nose jobs: At what point do you stop? There is danger in pursuing some idealized form of excellence. I am all for perfection, but the sport is not made more perfect by VAR. The beauty of soccer lies in its imperfections.