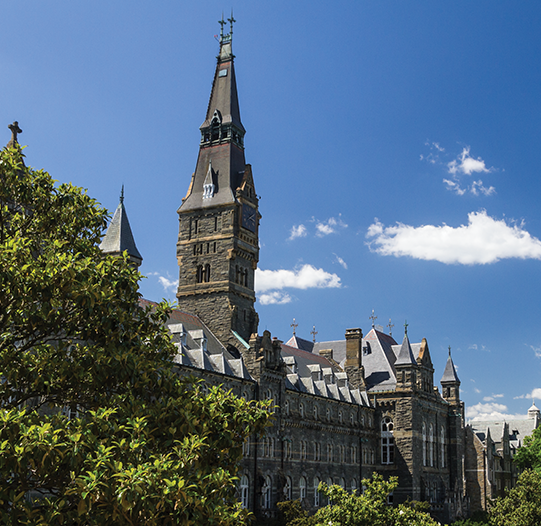 As the community awaits Georgetown University’s spring semester plans, a group of parents now call not only for students to live on campus this spring but also for Georgetown to cease enforcing its Community Compact, efforts that have been met with student criticism.

Since noise demanding the university reopen in the spring first appeared in the Class of 2024 parent Facebook group, over 600 parents and students have organized in a private Facebook group, “Students and Parents Advocating for Georgetown Students on Campus.”

The group submitted a letter to administrators Sept. 21 and has since hosted a private meeting with administrators, met with the Citizens Association of Georgetown and published a petition addressed to university administrators and members of the board of directors, which has garnered over 1,500 signatures as of Nov. 5.

By not allowing students to return to campus, the university creates disparities between students, sacrificing the mental health of some for the physical health of others, according to Palmina Fava (SFS ’94), whose son is a first-year student.

“If there is a disparity that is being created because we are mindful of a physical health risk while disregarding emotional health risk, it’s been important for me to say, well if we’re following the science, the science on how COVID affects the student population suggests to us that we should be open,” Fava said in an interview with The Hoya.

Students have criticized the group’s efforts, however, with some posting their disapproval in the Facebook group.

Jameson Nowlan (SFS ’23), a student currently living on campus, explained why she opposes rushing to reopen in the spring in an Oct. 26 Facebook post to the private group. Nowlan said she feels the mental strain just like everyone else but that protecting the lives of others is worth it.

“We cannot ignore the current public health situation. We are in the middle of a pandemic and while many students are perfectly healthy, we cannot forget about the hundreds of faculty, staff, and students that are either at-risk themselves, or live with immunocompromised family members,” Nowlan wrote in the post. “I am mentally and physically drained like everyone, but we have to work through it. I get we all need to cope, but if you feel okay with blindly slandering professors, other parents in the group, administration and even President DeGioia, you need to reevaluate.”

Nowlan’s post has since been removed from the page by the group’s moderators.

The university reported 18 new cases of COVID-19 on or near campuses between Oct. 25 and Oct. 31. As of Nov. 5, more than 252,000 COVID-19 cases have emerged on more than 1,600 college campuses across the country, according to a New York Times database. The national case total now approaches 10 million, with over 230,000 deaths and counting.

Fava does not think anyone in the group is advocating for the university to overlook vulnerable members of the community, even though they are asking that the university take measures to bring students back to campus to protect the mental well-being of the rest of the student body.

“Let’s not elevate the health and well-being — the physical health and well-being — of a percentage of the population that we can put other controls in place to protect while we ignore the very real and serious consequences that are posed to the student body,” Fava said. “Let’s find a way to address both and keep both parts of people healthy, not just the physical, but the mental.”

The group has also started organizing efforts against the Community Compact. The compact sets limits on off-campus gatherings, asserts social distancing standards, delineates which parts of campus are accessible to students and outlines the consequences of violating any of the university’s rules.

“I find it draconian the way the university is trying to impose it and the penalties that it’s imposing on students who are found in violation of the COVID policies,” Fava said. “When Georgetown abdicates its responsibilities to fulfill its mission as an educational institution, and it doesn’t bring students back to campus, it doesn’t bring students back into the classroom, while knowing that those students are in the neighborhoods and are throughout D.C., then it is essentially saying ‘We don’t have responsibility for these kids. It’s the District’s problem.’”

Parents in the Facebook group whose students have been punished for violating the compact while living off campus have expressed frustration that Georgetown’s policies are stricter than the policies set forth by D.C., according to several posts in the group.

Nowlan understands that students are frustrated with following the university guidelines if they are not living directly on campus, but does not think the rules are too strict, considering the severity of the COVID-19 pandemic.

“I don’t think the Community Compact is insane,” Nowlan said in an interview with The Hoya. “You just have to get tested like once a week, you’re not allowed to host gatherings of over 10 people, like a lot of things that I have no desire to do during a global pandemic.”

Parents should be advocating for their students and they have a right to the education they pay for, but many of the group’s efforts have gone beyond mere advocacy for what is best for their students, Nowlan said.

“I was asking everybody, including myself, to check our privilege during this time,” Nowlan said. “We’re all angry, I understand that. But we have to understand, in the middle of a global pandemic, how our own privilege operates and affects our efforts to want ourselves and our children back on campus.”

Clark, who currently lives in the Georgetown neighborhood, suffers from cystic fibrosis, a genetic lung disease. In her post, which was also removed by the group’s moderators, Clark explained that she is at high risk for COVID-19 because of her preexisting condition and is concerned that an influx of students to the campus and the neighborhood could put her in more danger.

In response to her Facebook post, parents commented that Clark’s perspective was fundamentally different from their students’ issues, as Clark had an established connection with the school and was already living in D.C. away from her parents.

Parents advocating for the university’s reopening believe they represent the interests of most students, so they were shocked to read that students did not agree with their advocacy, according to Manju Hariharan, whose daughter is a first-year student.

“Some of the comments I was reading from the students on the page were like, ‘Oh, you’re such a privileged lot of parents,’” Hariharan said in an interview with The Hoya. “No, I just want my kid to have an experience. That’s it. And if anyone doesn’t want that experience, I’m not going to force you.”

Advocating for students to be on campus should not be a priority right now though, Clark said in an interview with The Hoya.

“It really just feels like they’re trying to get their kids on campus so that they can see other college kids, which is exactly what we’re trying to avoid right now,” Clark said. “None of us like this, but it’s not really about what we like right now. It’s about what we have to do to keep ourselves and each other safe.”

The negativity was unnecessary and the students’ arguments did not make much sense, according to Hariharan.

“You’re living off campus, and you’re telling me that I can’t send my child there to be on campus where it’s going to be more controlled,” Hariharan said. “To me that didn’t make so much sense. It was like I get to do this, but I’m telling you you can’t do this.”

Despite pushback, there are some students who agree with the group’s advocacy. Some first-year students feel especially isolated from a campus they have yet to live on and hope for the opportunity to come to the Hilltop next semester, even if classes are mainly virtual, according to Kathy Gong (COL ’24).

“Parents saw what their children went through for the fall, and I think if they’re speaking up now it indicates that students are generally dissatisfied with the virtual learning environment,” Gong wrote in an email to The Hoya. “To me, meeting with members of the university and forming petitions is a great way to ensure that the university is taking everyone’s opinions into account.”

Gong plans to move to D.C. if not offered on-campus housing in the spring, with the hope that she will be more motivated to continue virtual classes nearby other Georgetown students, she said.

Katherine Cooper (SFS ’24), a student living off campus in the Georgetown neighborhood this semester and planning to do the same in the spring, said she understands the logic on either side. Although she is happy to be in D.C., it has been difficult to see many of her high school friends living on campus at other schools while she misses out on this experience, she said in an interview with The Hoya.

“This has been a really tough year for every college freshman from senior year and having prom, sports, graduation canceled and then starting off our freshman experience in college online,” Cooper said in an interview with The Hoya. “I can see a solid argument for either way, of opening or not opening.”

The university has already confirmed that it will not be bringing all students to campus in the spring. However, it hopes to increase the number of students on campus from 500 to approximately 2,720 students, according to an Oct. 21 meeting between the Georgetown University Student Association and university administration.

Parents in the Facebook group have also referred to other D.C. universities, such as Catholic University and American University, which have both opened to students to some degree, to justify their perspective. Parents are arguing that if these schools can open, so can Georgetown, according to several Facebook posts.

George Washington University announced Oct. 9 that it would again conduct the spring semester entirely online to keep students and faculty safe from infection. Georgetown is currently set to release its spring plan by Nov. 16.

Nowlan said that activism should help those in danger and those most at risk of dying if they contract coronavirus, and she asked parents to consider whether their advocacy is misplaced.

“Why do you think it’s okay to say things like, ‘Students probably won’t die.’ Is it because your kid probably won’t die?” Nowlan said. “I am a generally healthy 19- almost 20-year-old. I’m probably not going to die of COVID if I get it. But that doesn’t mean I want all these students to come back because I know of immunocompromised students, I know of sick faculty who would really be deeply affected by this. When I was suggesting that people check their privilege, I was thinking, ‘How does your socioeconomic class, how does your race, how does your access to health care make the pandemic apply to you differently?’ and really consider that in your activism efforts to send people back to campus.”

UPDATE: George Washington University announced it will be able to bring an additional 1,500 students back to campus this spring in an Oct. 22 update to its spring housing plan.