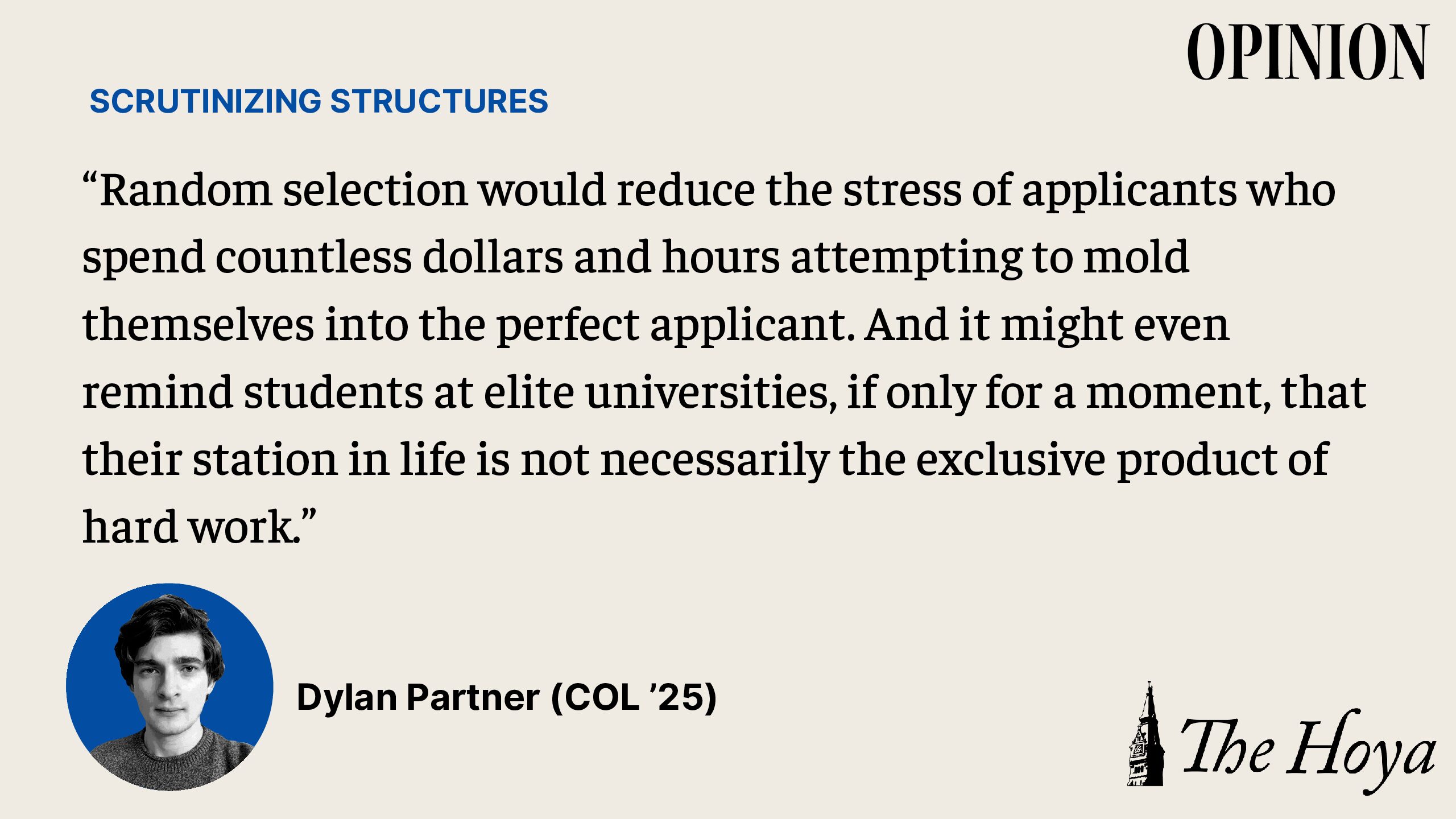 There are a million ways to do college admissions right, it seems. There are those who are traditionalists, favoring an emphasis on long-used measures of achievement and capability like standardized test scores and GPAs. There are those who hope that a constellation of essays and interviews can reveal an aspiring student’s quality. And then there are those who aspire to cast the whole gambit aside as a relic of a discriminatory past.

Most of the time, however, the admissions departments of selective colleges shy away from closely detailing what they’re looking for in applicants, and are more apt to emphatically use the word “holistic” to refer to their review process, like Harvard, Yale and Brown, to name a few. Frankly, the Georgetown Office of Undergraduate Admissions’ statement that “a candidate’s academic performance is the most important criteria under consideration” is unusually straightforward for a competitive university.

I am well aware that I am addressing an audience already familiar with the grueling realities of applying to selective colleges. As a transfer student, I am particularly acquainted with the processes’ opacity, having had the privilege of going through it twice with wildly divergent results. The college admissions process as it is currently structured can be emotionally draining and perplexing to navigate. But there are many painful things that we must endure out of necessity, whether they’re for building our resilience or strengthening our society. The path to take is unclear, but perhaps we can find a solution in the work of Harvard political philosopher Michael Sandel. His proposal is quite radical: Change the admissions process at selective universities so they simply accept a random selection of applicants above a certain threshold of qualification.

Sandel has written a number of well-received books that have brought philosophy to a wide audience. The most recent of his books is “The Tyranny of Merit,” which provides a wide-ranging critique of the deleterious effects of meritocracy on our society. Sandel does not oppose the obvious advantages of sorting people according to their ability. Instead, he more carefully targets the psychological and political repercussions of constructing a society where ability is viewed as tantamount to virtue. The most conspicuous competition for merit in American society is the college admissions process, and he comes at it with a veritable battle ax.

Sandel quotes a longtime member of the Yale admissions committee, who said in 1960, “You sometimes have the nasty feeling that you could take all the thousands of [applications] … and you could throw them down the stairs, pick up any thousand, and produce as good a class as the one that will come out of the committee meeting.” Sandel suggests that colleges remove only those who are unlikely to contribute to or fully embrace the college experience, leaving as much as three-quarters of the Stanford applicant pool, for example, open for random selection.

I have my disagreements with Sandel’s solution: I think that it is worthwhile to create universities that concentrate top talent, so more rigorous thresholds might be warranted. Additionally, placing emphasis on making the selection procedure both quantifiable and transparent would be important to build trust between admissions committees and applicants.

The threshold could be set by a weighted mixture of SAT scores and high school grades, or it could privilege certain applicant attributes, or even implement affirmative action. The important point is that it would be more transparent and less stress-inducing than the current process. Colleges today may tell students they take one qualifier more or less into account than others, but the whole affair remains unquantifiable and mysterious from the outside, as evidenced by the glut of books claiming to offer a true insider’s take on college admissions.

A 2017 study found that 74% of Georgetown students came from families in the top 20% of incomes nationally, with over one in five students coming from the top 1% alone. This is by no means an anomaly among selective elite universities. Random selection would serve to break up the cartels of talent and capital that concentrate at the most privileged institutions, which inevitably leads to equally concentrated groups inhabiting the halls of power after graduation. This solution would necessitate finding an optimal threshold level that would create an upper tier of institutions whose pupils are exceptional but not overly so. While large inequalities in institutional wealth and prestige would not go anywhere just yet, new students who come from wealth or are destined to find it will spread their benefaction more broadly.

There would also be other positive consequences: random selection would reduce the stress of applicants who spend countless dollars and hours attempting to mold themselves into the perfect applicant. And it might even remind students at elite universities, if only for a moment, that their station in life is not necessarily the exclusive product of hard work.

I don’t doubt that Sandel’s proposal would be a hefty burden to undertake, if it could even get past the concerted opposition of those who have an interest in keeping the current system as it is. But that is precisely why it is so important for those who are already in the system to press for change. It’s time for us at Georgetown, and at selective colleges across the United States, to consider Sandel’s modest proposal.

Dylan Partner is a sophomore in the College. His column Scrutinizing Structures appears in print and online every third week.