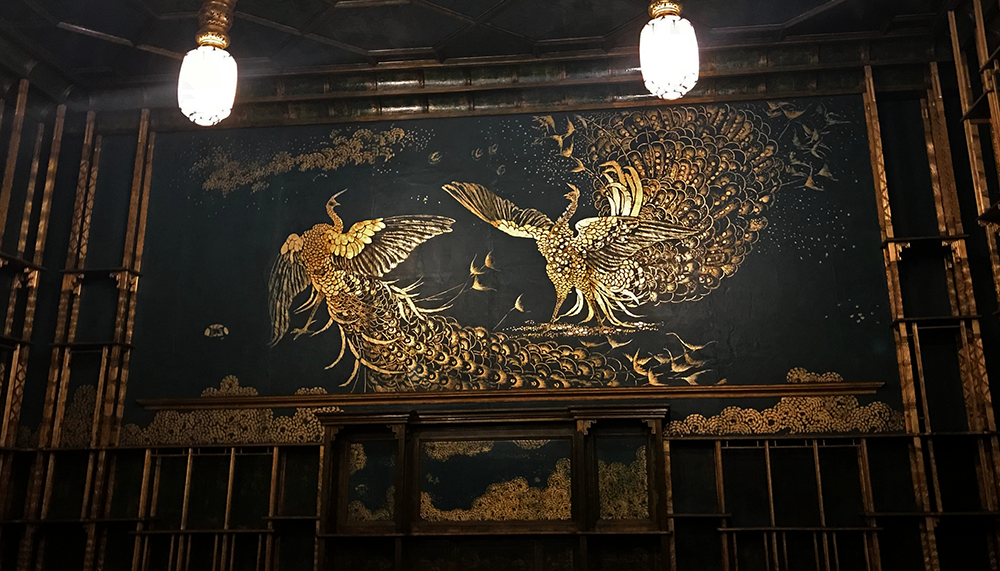 Finally open again after a 35-day government shutdown, the Smithsonian Institution’s Freer Gallery of Art is taking advantage of an exhibition change to showcase 19th-century American artist James McNeill Whistler’s beautifully painted “Peacock Room” between now and mid-April. The room is an awe-inspiring testament to Whistler’s ability and the East Asian influence on Western art during the late 19th century that anyone should go see.

Visitors are invited to see the room as a work of art unto itself, rather than as an additional gallery for various porcelain collections. Those interested in Impressionism will not want to miss one of the United States’ leading painters in challenging artistic authorities.

The “Peacock Room” was originally constructed and painted for Frederick Leyland’s London townhouse between 1876 and 1877. Whistler was commissioned to decorate the room’s moveable panels and ceiling, which he collectively titled “Harmony in Blue and Gold.” This commission came after the room’s original architect, Thomas Jeckyll, fell ill and discontinued his work.

A dispute over fair compensation inspired Whistler to paint two fighting peacocks at the far end of the room. Leyland was not pleased with the outcome and partially hid the decorations with his collection of China.

True to the room’s name, pairs of peacocks appear throughout; their feathers are painted in a brilliant gold pigment elegantly set off by a deep turquoise background. Each bird is at once highly detailed and relatively abstract. Whistler’s loose style gives the peacocks a life of their own, encouraging the eye to wander freely.

The ceiling is similarly peacock-inspired with painted blue-green feathers arranged around pendant light fixtures. Abstracted clusters of gold feathers placed beneath shelves give the room a sense of cohesion, dispelling elements of the darkness from the deep blue wall behind. These abstracted feathers reveal Whistler’s coarse brushstrokes upon further examination. The physicality of the strokes, most of which seem to be dry-brushed, brings the viewers undeniably closer to the artist himself and deepens their appreciation for the painting.

Whistler’s Japan-inspired forms and lively style undoubtedly lend the room a sense of movement. Expressive, visible brushstrokes suggest a vitality mirrored by the fighting peacocks. A painting titled “The Princess from the Land of Porcelain” hanging opposite these quarreling birds carries a similar energy.

Following the Western tradition of Orientalism in the 19th century, Whistler’s portrait depicts a young European woman draped in a Chinese robe holding a fan and looking wistfully towards the viewer. Its rosy tones clash with the room’s dark walls, and only a gold frame saves the painting from looking altogether out of place. Nonetheless, “The Princess from the Land of Porcelain” emphasizes Whistler’s artistic versatility and stands as a clear reference to his European-guided fascination with East Asia.

After Leyland’s death, the fully moveable room was purchased by American collector Charles Lang Freer for his home in Detroit, Michigan. Freer was a prolific Whistler collector whose purchase of the “Peacock Room” likely had more to do with his affinity for the painter than for the room itself. The “Peacock Room” later became part of Freer’s donation to the Smithsonian collection, where it now resides. Extensive conservation efforts have restored the brilliantly painted panels to their current condition.

With its meticulous detailing and its opulent extravagance, “The Peacock Room Revealed” is a must-see for people visiting the Freer Gallery.