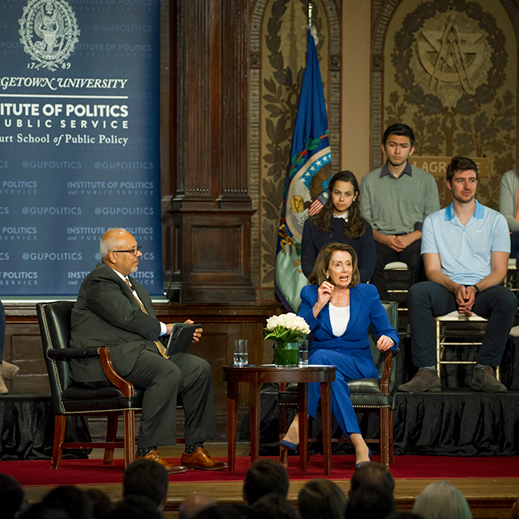 The online event, titled “Bearing Witness: The Legacy of Jan Karski Today,” brought together several acclaimed academics to shine light on the life and legacy of Karski, a Polish World War II war hero, spy and diplomat. Karski’s eyewitness accounts of the Holocaust were among the first delivered to Western allies. Karski served in the government department at Georgetown for over 40 years.

Pelosi lauded Karski’s courage in telling the truth about the atrocities of the Holocaust, even when many questioned him. “The United States must exhibit the same courage in standing up for human rights in our world today,” Pelosi said during the livestreamed event.

“One thing that really strikes me is the comparable phenomenon of denial and disbelief and mistrust that he encountered and that we are encountering every day,” Pelosi said. “We must speak out against these problems even if against our economic interests, otherwise the U.S. loses moral authority in these places.”

The event featured several other notable panelists, including Oscar-nominated actor David Strathairn, who stars in the play “Remember This: The Lesson of Jan Karski.” The conversation was moderated by theater professor Derek Goldman, who directed and co-authored the play.

Strathairn said he has often reflected on the lessons he has taken from Karski’s experiences while acting in character as Karski.

“I think about Karski’s choice to speak because he had a ‘historical responsibility;’ in this, we can find a lesson for the next generation. ‘If you choose to be a citizen of a certain country and you choose your leaders, you have a responsibility to speak up,’” Strathairn said, quoting Karski.

The play was produced by Georgetown’s Laboratory For Global Performance and Politics, an interdisciplinary program that integrates international relations with the performing arts. Goldman and Cynthia Schneider, The Lab’s co-founders, commented on how Karski’s story fits within the broader context of The Lab’s mission.

Colleen Bell, a former ambassador to Hungary and director of the California Film Commission, said The Lab plays an important role in bringing untold stories such as Karski’s to the focus of mainstream media.

“The power of performance can help to shape communal narratives that serve to humanize all of us,” Bell said. “The ability of artistic expression to evoke emotion, to touch the minds and the hearts of an audience, is extremely valuable.”

The event also featured four undergraduate Georgetown students who enrolled in the one-credit course  “Bearing Witness,” which is part of the “Just Communities” curriculum that focuses on racial injustice, this semester.

Students said the class deepened their understanding of Karski’s lifework and provoked questions relating to the culture of exclusion and division that has defined 2020 current affairs.

The event concluded with a live performance by Strathairn, who acted out an excerpt from the play, as well as an excerpt from the upcoming film “Remember This,” inspired by the play. In his closing remarks before previewing the play and film, Strathairn said he hoped these artistic renditions of Karski’s story would help introduce new generations to Karski’s legacy.

“Everything we have heard is testament that we have done something. If this piece can elicit this articulate response, I am overwhelmed by the students,” Strathairn said. “They can create and impact a space whereby people like us can articulate the viscera for so many people. That is extraordinary.”