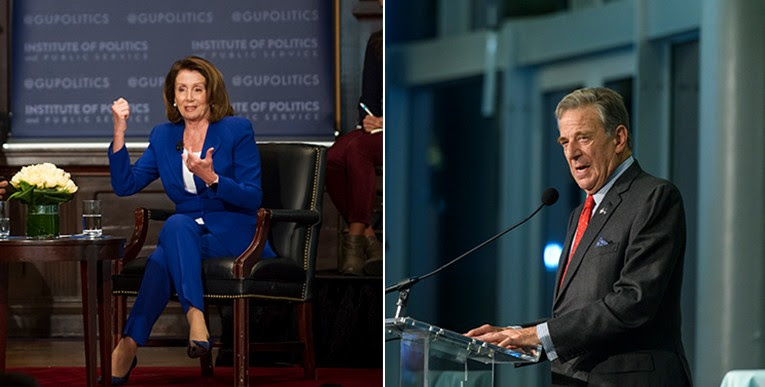 Chair of the SFS Board of Advisors Paul Pelosi (SFS ’62) and Speaker of the U.S. House of Representatives Nancy Pelosi donated $1.6 million toward expanding the career development programming of the newly renamed and endowed Paul F. Pelosi Public Service Scholars Program.

Formerly known as the Walsh Scholars Initiative, the Pelosi Scholars Program plans to double the number of participants it accepts to between 10 and 15 undergraduates per year, according to a Jan. 10 Georgetown University press release. The program seeks to aid students pursuing careers in public service through financial support for summer internships, mentorship and professional development.

This financial support also enables students to take civil service and nonprofit internships despite the fact that many of them are unpaid, Walsh School of Foreign Service Dean Joel Hellman said.

“It has created an opportunity for students of all different backgrounds and financial means to confidently take public service internships and not worry how they’re going to get housing and food and pocket money,” Hellman said in an interview with The Hoya. “What students do in the summer has a very big impact on the kinds of career paths that they choose.”

In addition to stipends for their internships, students have access to sessions in job training, professional development, networking and mentorship. The program also allows students to shadow Georgetown alumni working in the public sector to learn more about the field.

The Walsh Scholars Initiative was founded in 2015 by Megan Murday, the President of the School of Foreign Service Academic Council at the time. Noting that unpaid internships in the public sector might exclude students from pursuing careers in public service, Murday and the council devised the program to help students pursue public service internships without sacrificing financial stability.

With its new endowment, the Pelosi Scholars Program can not only provide more resources to its students, but can also expand to include up to 15 students for each admitted class.

Paul Pelosi had been interested in the Walsh Scholars Program as his tenure as chair came to a close, according to Hellman, due to the program’s lack of permanent funding.

“When we told him about the Walsh Scholars Program, and that what we really needed to do was endow the program so that it would become a permanent feature of the SFS landscape and expand the program, he was very excited because it fit with the spirit of his own service to the university and his family’s service to the country,” Hellman said.

Paul Pelosi has maintained a close relationship with the university after his graduation, holding the longest tenure as the Chair of the SFS Board of Advisors and having sent both his children to Georgetown.

Speaker Pelosi said the program provides students with an important connection to the international world.

“The mission of this program is to equip students with the professional experience, confidence and opportunity to address the most pressing international challenges of our time,” Nancy Pelosi said in a statement to Georgetown University. “Indeed, to advance Georgetown values, and make the world a better place!”

This program compliments the mission of the SFS, Paul Pelosi said to Georgetown.

“This is so in our sweet spot to encourage young people who are interested in careers in public service. To the extent that we can facilitate that in a significant way is just really exciting to us,” Paul Pelosi said.

The program has been very popular among students, according to Hellman.