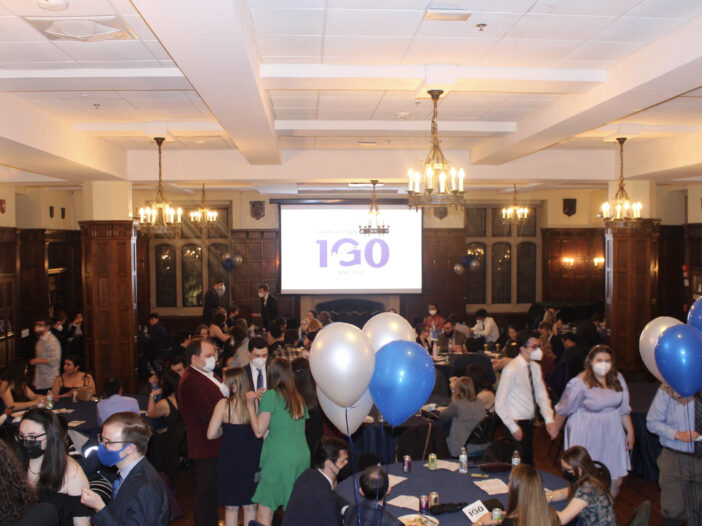 For the last 100 years, the Georgetown University Pep Band, decked out in blue and gray, has always been present at home football games and is celebrating its 100-year anniversary this year.

The Georgetown Pep Band celebrated its centennial year April 9, with nearly 100 current band members, graduates, athletic team representatives and members of the department of performing arts attending the formal ceremony in the Copley Formal Lounge. The centennial celebration featured speeches, performances, dinner and dancing, as well as a slideshow of photos from former members over the years.

Planning committee member Kevin Ogeka (MSB ’24) said the team made an effort to ensure that the centennial celebration included everyone — past and present — affiliated with the pep band.

“The responsibilities of the planning committee was to make sure everyone new and previous felt included in the celebration of the event,” Ogeka wrote to The Hoya. “This included the decision to have a zoom option for alumni who didn’t have the opportunity to make it to still be able to witness the event and celebrate along with everyone.”

Current pep band members honored Band Administrative Advisor Ron Lignelli, who is retiring after 37 years at Georgetown and gave an impromptu speech about his time working with the band at the ceremony.

“I shared with them that I’m a band person at heart, and I was actually the director of this organization my first three or four years at Georgetown — this group is very close to my heart,” Lignelli told The Hoya.

“We scanned interesting and relevant docs and photos to put in the slideshow and found some amazing things such as: plans for a 1960s tour of South Asia to entertain US troops, Hoya articles from the 20s about the band’s formation and progress, and Bill Clinton’s student government ticket which listed him as a member of the Georgetown band,” Thomas wrote to The Hoya.

At the anniversary celebration, the pep band’s own drum line led the group in singing the Georgetown fight song, while the low brass section performed student arrangements of “Hallelujah” and “Pirates of the Caribbean,” according to Alumni Relations Coordinator and Planning Committee co-Chair Domenic De Santes (COL ’23).

“I hope that this Centennial Celebration has inspired the current members of the band to appreciate what we do as a band and how it is connected to decades of Georgetown history and sport,” De Santes wrote to The Hoya. “I also hope to build off the momentum of the event to create a stronger alumni network to keep generations of band Hoyas connected to the band and to each other.”

Thomas hopes to see the pep band continue to expand and instill more school spirit in the next century.

“I hope that the band continues to provide an on-campus family for all those who decide to join, no matter how committed or casual they want to make their experience,” Thomas wrote. “Numbers are already on the rise, but I hope that the pep band can grow even more so we can continue carrying the spirit of Georgetown through music and pride at sports games and other events!”

The pep band has grown in influence over the course of the last 100 years. While the band originally only played at Georgetown football and basketball games, they now also perform at Georgetown soccer and lacrosse games, according to Ogeka.

“Pep Band is about more than the numbers on the scoreboard or in the stands. It’s about the people. Our community more than anything else gives us reason to celebrate,” Volino wrote to The Hoya. “We celebrated the community that the band has built over the last century, and the ways the band has evolved and persisted during that time. I hope the band will do the same for the century to come.”

Lignelli said his time as a member of his own undergraduate school’s band was some of the best years of his life and that the ceremony allowed alumni to reflect on the lasting relationships they made through the band.

“That’s the great thing about the performing arts — making art is secondary to making friendships,” Lignelli said. “Those are the things that I always remember and I think the students here will treasure.”