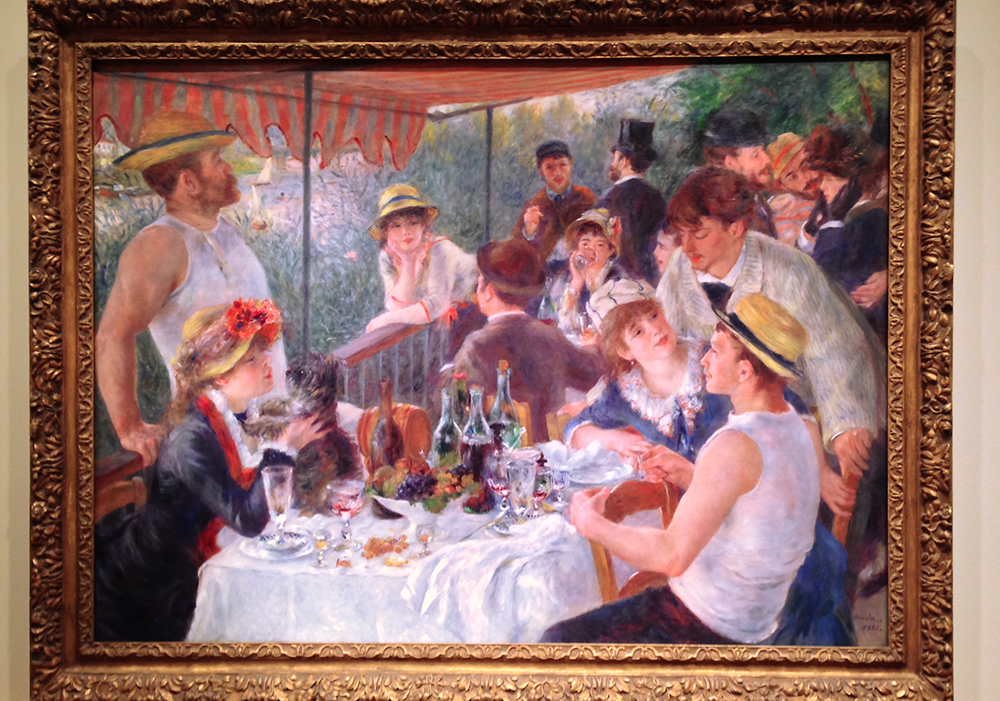 The Phillips Collection is a hidden gem of galleries in the District. While it is does not offer as wide a range of work as the Smithsonian art museums, it is one of the most impressive private collections in D.C., and it deserves this reputation.

This body of artwork comes entirely from the private collection of one man, Duncan Phillips, who gathered American and French impressionist art and early modern masterpieces throughout his entire life. Instead of leaving these works to languish away from the public eye (as many private collections do), Phillips and his wife opened a museum to display the collection. Much of the permanent collection is housed in the old Phillips’ family home, meaning you experience their art in a unique way. Although seeing a Van Gogh or a Braque hung over a fireplace is disorienting at first, the worn hardwood floors and the dramatic music room make the gallery feel much more welcoming and comfortable than a standard museum. 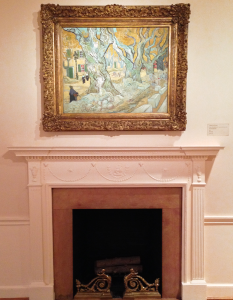 While Phillips acquired many works by both impressionist and post-impressionist artists, his collection of works by Vincent Van Gogh are most striking — particularly the 1889 work “The Road Menders.” The green-tinged bark of the trees and the delicate yellow leaves that top them flow in a gradient to the similarly colored road and town below. In addition, the yellow architecture in the background fuses into golden shades of the tree canopy beside them. While this blend of shades helps to unite the overall photo, the geometrically varied shapes of the road menders’ blocks provide a stark contrast to the less rigid forms of the accompanying landscape. Van Gogh’s thick brush strokes and subtly distorted features are a testament to his unrealistic style of painting. The faceless figures scattered throughout the work also add to this distinct look, inspiring an aura of otherworldliness that blends human life and the surrounding environment into one flowing, unified atmosphere. Whether it is the black clothing of the passersby, the structured squares of the building blocks or the warped shape of the trees, each element adds dimension to this painting. The work’s presentation, hung over one of the many fireplaces in the old wing of the museum, seems to be a little disjointed, but that may be because of an expectation by the viewer of a more stereotypical white-walled backdrop. 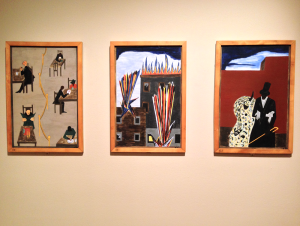 The Phillips Collection also boasts Jacob Lawrence’s “Migration Series,” which details the events common in the lives of African-Americans participating in the Great Migration from the agricultural South to the industrial North after the end of the Civil War and Reconstruction. The piece consists of 100 panels, of which the Phillips owns 50 — the other half are housed at the Museum of Modern Art in New York City. Lawrence is one of the most important black artists of the 20th century, and the story these images tell is a powerful one that is often overlooked in American history. The figures seem crude, as there is little sense of distance, or perspective. However, their purposeful simplicity draws on strong African artistic tradition and the verbal histories that passed through generations of African-Americans in both the North and South.

Luncheon of the Boating Party (Renior) 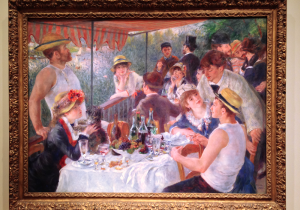 The most beloved work of art in this collection is Pierre Auguste Renoir’s bright and lively masterpiece “Luncheon of the Boating Party.” The level of detail on the large canvas is striking. Everywhere you look, new details emerge, whether it’s the reflections on the numerous glasses, the sunlight bouncing off the surface of the water or the bright ribbons adorning the gowns and hats of the leisure-loving partygoers.

Renoir is known for his mastery of light and color, and “Luncheon on the Boating Party” only proves that he deserves all that praise and more. Given the painting’s size, there is often unrecognized action hiding in the background, and his crowd of aimless flaneurs seems to glow with light and life.