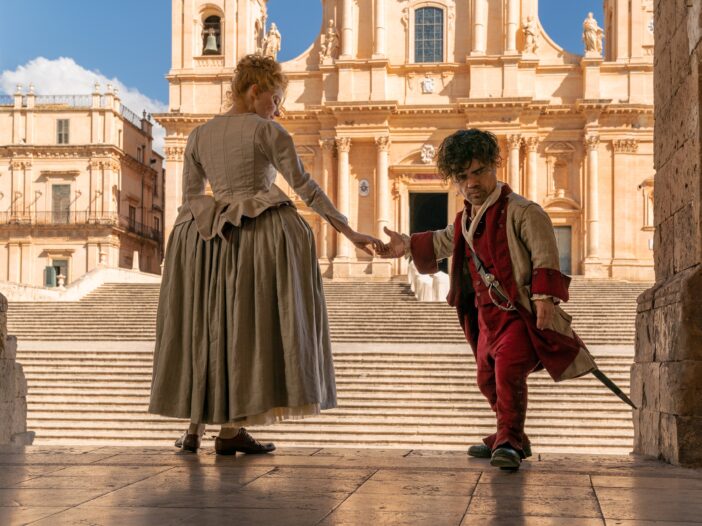 If you have ever wanted to watch a “Game of Thrones” actor recite poetry, engage in violent swordplay, and break into song all in the same scene, “Cyrano” is just the movie for you.

A new cinematic musical from director Joe Wright, “Cyrano” succeeds most when its star, Peter Dinklage, is on screen. But when he’s not, the film’s poor cinematography and awkward musical numbers distract from its more touching moments.

The film’s opening scene is a perfect microcosm of the movie’s overall strengths and shortcomings. The movie begins with an elegant woman named Roxanne preparing to attend a play with a duke whom she does not love, and on the way to the show, she launches into a generic, lovesick ballad that lasts far too long.

But when she finally arrives at the play, Dinklage’s Cyrano de Bergerac makes a flamboyant appearance, spouting insult-laced poetry at a pompous stage actor, and it suddenly becomes impossible to look away from the screen.

Released Feb. 25, “Cyrano” attempts to breathe fresh life into the age-old love triangle plot formula. The eponymous central character (Dinklage) enchants all who meet him with his poetic proficiency and impeccable swordsmanship, but he fears his small stature makes him unworthy of the woman he loves, his close friend Roxanne (Haley Bennett).

To add insult to injury, Roxanne falls in love at first sight with a handsome young soldier named Christian (Kelvin Harrison, Jr.). As Roxanne and Christian rapidly fall for one another, Cyrano begrudgingly agrees to act as a go-between for the pair, penning rapturous love letters to Roxanne in Christian’s name.

But matters become complicated as Roxanne draws closer to discovering Cyrano’s unsaid feelings for her, covertly revealed in letters written on behalf of another man.

To say Dinklage’s acting is the best part of the film would be a gross understatement.

Dinklage’s performance is as charismatic as it is woeful, and all the film’s successes depend on his brash but wistful take on the central character. When he delivers his lines, Dinklage uses smirks and accentuated eyebrow movements to depict Cyrano’s outward confidence, while also displaying restless movements like a facial tic to reflect the insecurities lurking under Cyrano’s veil of bravura. The movie is at its best when he is on screen.

Unfortunately, when Dinklage is not the center of attention, the film’s visual and musical faults drag it down. Dinklage’s co-stars, though they clearly put effort into their performances, simply fail to match his magnetic screen presence.

And though the costumes, makeup and set design are all marvelously detailed — even down to the seams on Roxanne’s stockings and the steam rising off of the duke’s freshly stamped seal — “Cyrano” often feels more like a filmed stage production than a true film.

The director’s tendency to depict very contained venues rather than using shots with wider scopes makes the movie feel small and better suited for a Broadway stage than the AMC, detracting from the high-stakes drama of the story.

Even more disconcerting than the director’s odd visual choices are the film’s appallingly disjointed songs. The musical numbers are poorly choreographed and bereft of poetic lyricism, with each line falling blandly upon the last. Roxanne’s opening love song, for instance, is just a collection of loudly enunciated sentences that hardly rhyme and, as a result, fail to flow seamlessly.

Even the most well-delivered ballads feel like contrived rehashes of other songs in the film, and almost every song fails to stand out from the others. The one exception is a beautiful soldier’s lament, “Wherever I Fall.”

Admittedly, buried within this undeniably flawed mess of a film is a relatable love story, even if the only reason why the contrived love triangle story feels fresh at all is Dinklage’s sympathetic portrayal of Cyrano.

By building a tragic but charming persona for the titular character, Dinklage invests the audience in Cyrano’s romantic struggles, ensuring the movie will resonate with anyone who has experienced the pangs of unreciprocated love or the uncertainty that comes with falling for a close friend.

And unlike many romantic films, “Cyrano” does not pander to its audience with a fairy tale conclusion. Instead, it grounds its ending in realism, refusing to give its characters a conventional happy ending while still providing closure for the arduous romantic journeys of Cyrano, Roxanne, and Christian.

Thanks to the committed Dinklage, “Cyrano” has some merit, even though its uneven cinematography and generic music might deter you from wanting to watch Wright’s musical again “so badly you cannot breathe,” as goes one of its disjointed songs.