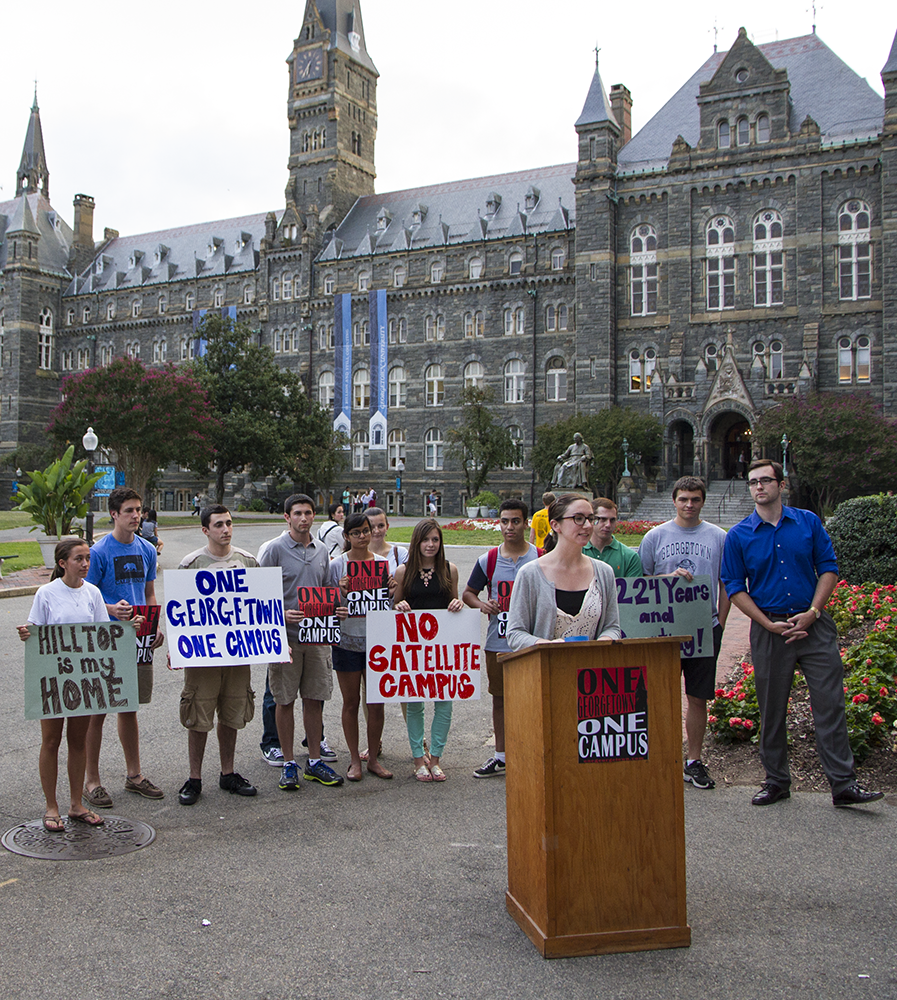 The Georgetown University Student Association Campus Plan Subcommittee and the current and incoming GUSA administration released a website and online petition calling for greater representation of student priorities in the upcoming deliberations of the 2018 Campus Plan on Wednesday night.

The petition, entitled “Let’s Not Get Screwed Again,” is comprised of three demands. First, that the university does not require a greater number of students to live in on-campus housing than was mandated by the 2010 Campus Plan. Second, that the university prioritize renovations and maintenance of existing buildings over the construction of new ones. The third and final point calls for greater student representation on the Georgetown Community Partnership Steering Committee. As of press time, the petition had amassed 500 signatures.

A conceptual draft of the 2018 Campus Plan will be drawn up this summer, and the final draft will be submitted to the university’s board of directors in summer 2017. The Campus Plan will be implemented Jan. 1, 2018 and will decide almost every major planning and construction decision for the next 20 years at Georgetown.

The GUSA Campus Plan Subcommittee within the GUSA Senate, created in September, created the petition and is the first group of its kind at Georgetown dedicated to the campus plan. GUSA Campus Plan Subcommittee Co-Chairs Ari Goldstein (SFS ’18) and Reno Varghese (SFS ’16) and Student Life Committee Chair Enushe Khan (MSB ’17) worked alongside GUSA executive leadership to create both the petition and a comprehensive website detailing the campus plan and its effects on students.

“You can see how it affects issues you care about and some history about the last campus plan,” Goldstein said. “We want to mobilize students around this in a really effective and public manner. We don’t want the next campus plan to have the same hostility we had in the last one.”

“In an unprecedented way, it’s a really good partnership between the GUSA senate and the GUSA executive,” Goldstein said. “It’s something the senate has been working on all year and you have this new executive who really cares about this coming into office. [Luther and Rohan are] helping to lead the campaign.”

Luther and Rohan both said they are working to make campus plan negotiations a central part of their administration.

“This petition is important primarily because students need to be significantly more involved and better represented in the campus planning and master planning process,” Rohan wrote in an email to The Hoya. “It is crucial that students show the Georgetown Community Partnership that they care about the future of Georgetown and will not be excluded from the planning process again. Now is the time to speak up.”

Rohan said that the Luther administration will engage students in this issue through social media and informational town hall meetings.

He added that ensuring that students have the right to live where they want, especially off campus, is a priority for Luther and Rohan. Presently, approximately 85 percent of all undergraduates live on campus, but Rohan said that the administration is looking to increase this figure to 90 percent. Rohan wrote that students “overwhelmingly oppose” this goal.

“The 2018 Campus Plan affects nearly every facet of student life and impacts every student,” Rohan wrote. “A consortium of student groups advocating for common goals will not only strengthen our community, but it will also enable us to more effectively pursue our objectives.”

On April 11, GUSA President Trevor Tezel (SFS ’15) will make a presentation of student priorities, along with the petition, at a Georgetown Community Partnership Steering Committee meeting.

Created in the 2010 Campus Plan, the GCP is the formal body tasked with drafting the 2018 Campus Plan. The GCP Steering Committee is co-chaired by Council for District 2E Chair Ron Lewis and Senior Vice President and Chief Operating Officer Chris Augostini.

The Steering Committee is the most important part of the GCP in terms of the campus plan and brings community leaders together to create a future plan for Georgetown and the community.

Tezel is the only student representative on the Steering Committee and will be replaced by Luther in May.

In addition to the Steering Committee, the GCP is comprised of six working groups. The most important of these in the campus planning process is the Master Planning Working Group, of which Tezel is the only student representative.

Tezel said that he expects the petition will help student views be better represented than they were in the 2010 Campus Plan. The 2010 Campus Plan has been criticized for ignoring student opinion, resulting in a third-year on-campus housing requirement, student parking ban and delayed renovations.

“The last plan was very closed-door, and students didn’t really have a direct role in the process until much later in the negotiating process,” Tezel said. “I do think that showing broad student support is going to have an impact … showing where students are at, and that there is a unified student voice around certain key principles, is going to really help us move the needle.”

Tezel urged students to get involved with the 2018 Campus Plan beyond the petition.

“It’s a really good chance to, one, have an active role in the policy making practice at Georgetown, but, two, to be able to put a name to the face with administrators and neighbors to understand who the players are on these major issues,” Tezel said.

“We are pleased to see strong student interest in the campus plan process,” Olson wrote in an email to The Hoya. “We welcome student engagement and have sought it out through our planning forum, student involvement on the GCP working groups, and many individual and small group student discussions with administrators.”