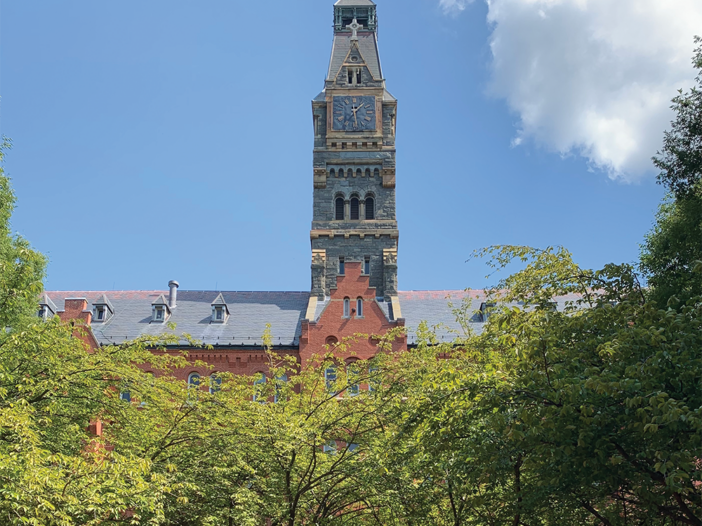 The Redeploy Georgetown program was initially introduced in August by the university’s Department of Human Resources as a voluntary program offering staff members semester-long public health-related jobs, such as health screeners, as a means to minimize furloughs, salary reductions and layoffs.

Because of a recent policy change, however, the voluntary program has now become a mandatory reassignment, requiring some employees to either accept their new, in-person redeployment position or take unpaid leave without benefits, according to a Dec. 16 email obtained by The Hoya that was sent to nonunion and Alumni Admissions Program staff members.

In response to the program change, 217 Georgetown community members, including members of the Georgetown University Student Association and the Georgetown Alliance of Graduate Employees, have signed an open letter calling for the immediate suspension of the new Redeploy Georgetown policy.

The letter, which an anonymous group of staff members delivered to university administrators Jan. 26, argues the university is in violation of the Just Employment Policy, which outlines the university’s commitments to full-time employees, and is endangering the wellbeing of its workers by sending them back to in-person work.

“Pressuring staff to conduct on-campus duties, which can include performing temperature checks for on-campus visitors and escorting COVID-positive students to quarantine, violates Georgetown’s commitment to protect staff’s ‘right to a safe and harassment-free environment,’ as outlined in the Just Employment Policy,” the letter reads. “The Redeploy Georgetown policy does not include exemptions for staff with medical conditions that make them especially vulnerable to COVID-19, forcing these individuals to choose between their lives and their livelihoods.”

Georgetown’s Just Employment Policy outlines the university’s commitment to providing full-time employees with a salary and benefits that compensate for all their health and financial needs. The policy also affirms Georgetown’s guarantee to provide a safe and healthy environment for Georgetown workers.

Beyond the health risks of working an in-person job on campus, unpaid leave also poses a threat to staff members’ overall well-being, according to a staff member who preferred to remain anonymous and will be referred to as Taylor to protect their identity.

“Given the pandemic, not only would we be placed on unpaid leave, but all of our other benefits would have been disabled,” Taylor said in a Google Meet interview with The Hoya. “So we wouldn’t have access to health care, for example.”

Some staff members who were notified of their new, mandatory in-person reassignments Dec. 16 say the new policy takes advantage of employees who understood the Redeploy Georgetown program to be a voluntary option, according to Taylor.

“In my part of the university, it was very much the idea of a sense of camaraderie. Like they said, it was very much about being on a voluntary basis and if we had the time,” Taylor said. “It was also much more flexible in the sense that it was originally offered that if you could spare an hour or two a week, five hours, and choose your increments, and do what you can for your fellow colleagues.”

The university enacted the Redeploy Georgetown policy change to keep the university’s workforce fully employed and avoid potential employee impacts, according to a university spokesperson.

“Georgetown’s hybrid operational status in Spring 2021 creates new work involving visitor registration, wellness screening and perimeter access support. A small number of current employees have been redeployed to perform these roles on a short-term basis,” the spokesperson wrote in an email to The Hoya.

All employees must also abide by the university’s COVID-19 protocol, including regular testing, mandatory mask wearing, daily check-ins and the use of access badges on campus, according to the spokesperson.

According to the Dec. 16 email to staff members, by opting for unpaid leave, employees lose access to health care and insurance benefits and dependent care, generating additional costs on top of a loss of salary.

Additionally, the policy does not allow for student Redeploy workers to schedule work around their classes. Student employees who decide to accept their reassignments may face disruptions to their education, while those who opt out of paid leave will be excluded from the Tuition Assistance Program, according to the email.

The university is ultimately sacrificing employees with minimal protections by changing the program, according to Taylor.

“If you think about who got redeployed, we are the administrators. We are staffers. We’re not tenured faculty; we’re easily disposable,” Taylor said. “It’s just a very sure sign emphasizing how little they value us, that they’re willing to put us in harm’s way in order to uphold the safety, ironically, at Georgetown.”

According to another staff member who preferred to remain anonymous and will be referred to as Alex to protect their identity, the university failed to account for the well-being of its staff and their circumstances when introducing the new policy, especially because the program is intended for nonunionized workers only.

“There was no due diligence in considering staff circumstances either — not just their own safety, but their families’ safety, children, there was no consideration for anything,” Alex said in a Google Meet interview with The Hoya. “They just treated everyone like numbers and just randomly, well I don’t know how they did it, but picked people.”

After a marked increase in COVID-19 cases among Georgetown community members living on or near campus, the university introduced a more restrictive operating status as of Jan. 28, according to a systemwide email. Some in-person assignments will be adjusted under the university’s new status, as fewer campus buildings will be open and there will be reduced traffic on campus.

The letter also criticized the Redeploy Georgetown program for relying on Georgetown University Police Department officers to facilitate and supervise on-campus workers, another violation of the Just Employment Policy, according to the letter.

“Asking redeployed employees — many of whom are people of color — to work with police officers in the wake of police violence against Black people and people of color also fails to provide a ‘safe and harassment-free environment,’” the letter reads.

Over the past year’ students have raised concerns about GUPD’s role on campus. Last June, following nationwide demonstrations against police brutality, a petition demanding the university cease all relationships with any police department garnered over 8,000 signatures. Additionally, the Georgetown University Student Association Senate passed a resolution that called for the university to cease its work with the Metropolitan Police Department on June 7 and later unanimously voted to create a student advisory committee to oversee GUPD.

Requiring Georgetown staff to work so closely with GUPD is stressful and potentially dangerous, especially for people of color, according to Taylor.

“The idea that you’re forcing your employees — especially there’s a disproportionate number of people of color that are in these positions with GUPD — it’s an abuse of power play,” Taylor said.

The university should redesign the Redeploy Georgetown initiative to align with its Jesuit values of seeking care for each community member, according to GUSA Senate Speaker Melanie Cruz-Morales (COL ’22), who signed the letter.

“I think that one of the most upsetting things, apart from the countless other things that have been brought on by the pandemic, is just how easy it is for companies and institutions to force their workers into environments that are just not safe,” Cruz-Morales said in a phone interview with The Hoya. “I think Georgetown has the opportunity to set the standard for other universities, which is why it’s so important that they get this right.”