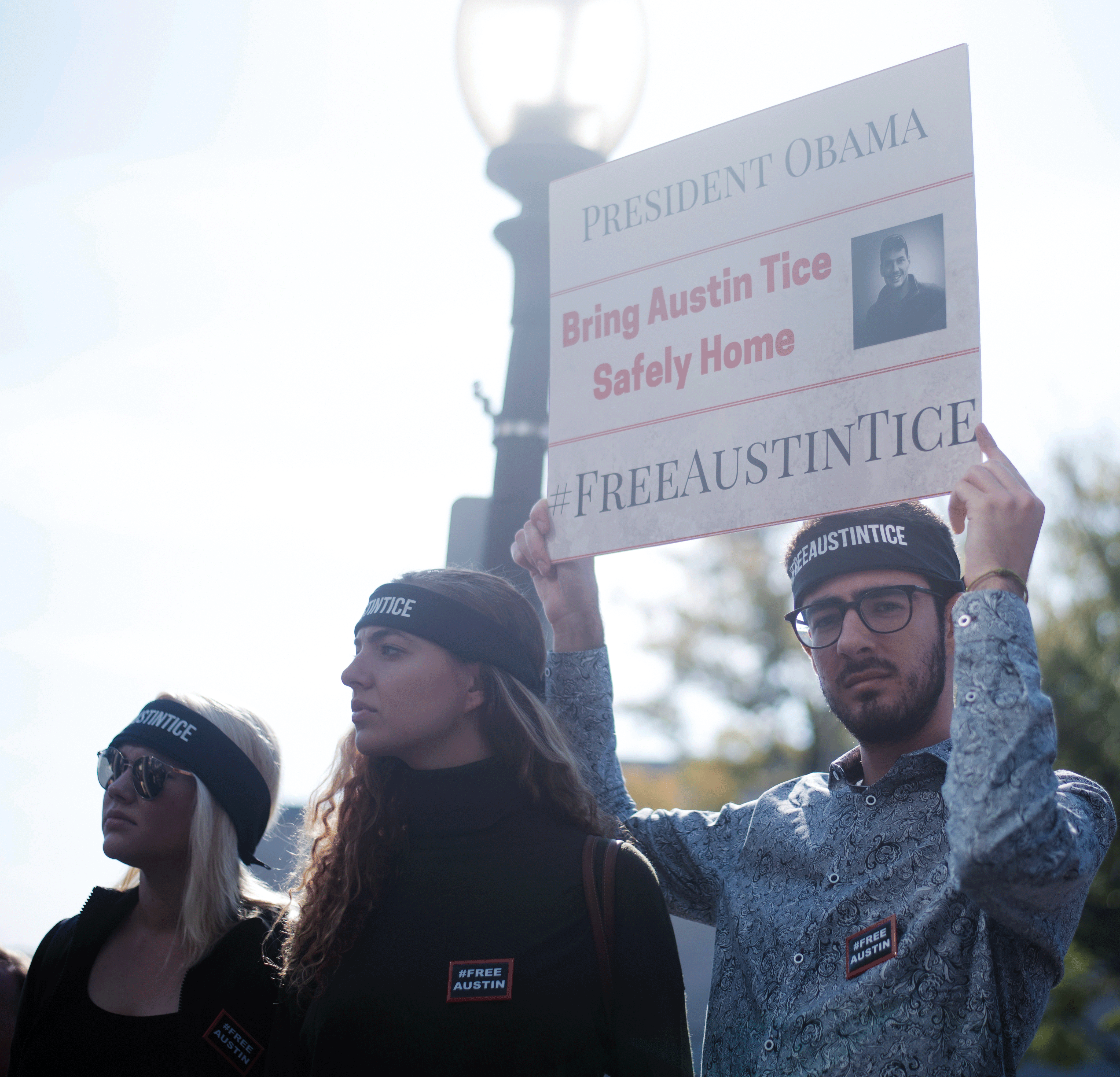 A group of students launched a petition yesterday addresed to Special Presidential Envoy to Hostage Affairs James O’Brien to expedite the release of Austin Tice (SFS ’02), a journalist who was kidnapped while on assignment in Syria on Aug. 14, 2012.

Georgetown University Student Association Chief of Staff Ari Goldstein (SFS ’18), who was involved in creating the online petition, said it aims to receive 5,000 signatures from members of the Georgetown community by Jan. 20, President-elect Donald Trump’s inauguration day. The petition is in the form of a letter addressed to O’Brien.

The GUSA senate passed a resolution Sunday in support of the petition prior to its launch, urging the university to raise awareness for Austin Tice’s situation.

“We decided to do this as a letter that people could sign on to rather than as traditional petition because we thought it would have more of a narrative effect and because Austin’s story is so much bigger than any of us,” Goldstein said.

According to Feinman Todd, the GUSA resolution, which calls for the university to take action, including hanging a banner on campus with Austin Tice’s name and creating a university-sponsored web page for the cause, could help attract further attention to Austin’s cause beyond the Georgetown community.

Feinman Todd took a group of students to the Newseum two weeks ago, when it unveiled a large banner of Austin Tice outside its Pennsylvania Avenue entrance, pledging to keep it up until he returns.

“There’s always more we can do. A specific thing I’m hoping Georgetown will do is hang a banner similar to the one at the Newseum in a prominent place,” Feinman Todd said. “It would be the next thing and it could be a big public thing.”

Goldstein said GUSA’s support of the petition indicates solidarity for the cause.

“The resolution in GUSA was GUSA coming together saying we as a body sign on to this letter. For the 29 senators to speak with one voice and say we need to stand together with Austin Tice and urge President Obama to do more to secure his release is a powerful statement,” Goldstein said.

The Georgetown University Law Center Student Bar Association House of Delegates passed a resolution in support of Austin Tice on March 15, 2016. His mother, Debra Tice, said she was touched by the continuing efforts of Georgetown and its students in support of her son.

“We are humbled and deeply amazed,” Debra Tice said in an interview with The Hoya. “We have a new appreciation for the rallying cry ‘Hoya Saxa.’”

Both Debra Tice and her husband Marc Tice have signed the petition. Marc Tice said the support from the Georgetown community is immensely powerful in pushing for Austin Tice’s release.

“Georgetown University, its alumni and its students are so highly respected. So many Georgetown alumni are on Capitol Hill and go on to positions of real prominence so it’s incredible for us to have that kind of support from that institution and the people representing it,” Marc Tice said.

Debra Tice and Marc Tice participated in a panel discussion at Georgetown on April 6 as part of the Salim El-Lozi Lecture Series, organized by Feinman Todd and sponsored by the undergraduate journalism program.

Discussion at Georgetown inspired media attention, as well as a rally at the White House on April 18.
Feinman Todd said these efforts are important to ensure sure the government is continually reminded of Austin Tice’s situation.

“We’re just trying to keep his name in the news so people don’t forget him,” Feinman Todd said. “Whomever else is making decisions about where our government puts our resources toward, I am hoping that they will understand that the Georgetown community has not forgotten Austin, that he is one of our own and that we care and that we want them to do whatever they can within their power to find a way to bring him home.”

Debra Tice said the campaigns have served as encouragement for her and the larger community to keep fighting for acknowledgment from government officials such as Secretary of State John Kerry.

“They have all been such positive campaigns of encouragement. There hasn’t been anything critical or shaming, it’s just looking to secure Austin’s release and encouraging President Obama to keep up the good work, encouraging Secretary Kerry to push on,” Debra Tice said. “Now this new letter that’s going out says that we recognize that you are committed to this and we encourage you not to grow weary of doing good.”

According to Feinman Todd, Austin Tice’s case is important not only on a personal level, but in terms of its larger significance of protecting the freedom of the press.

“While we are of course laser focused on getting our son home safely, there is a much larger issue here which is our freedom of the press.” Marc Tice said. “Everything Georgetown is doing, while it may have Austin’s name on it, we feel is also a support of the right to press freedom.”

Feinman Todd said the petition is a small action that will have a large impact.

“It takes 20 seconds,” Feinman Todd said. “This is something that will get the attention of people who can do something. It is going to achieve more than liking a post on Facebook.”