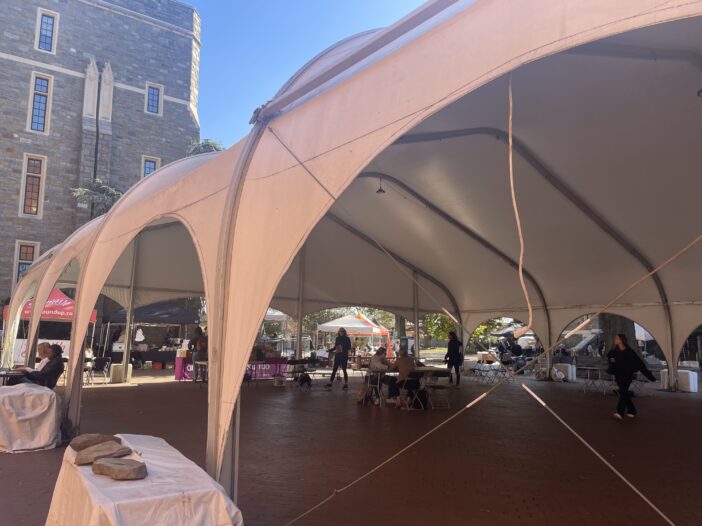 More than 280 students have signed a Georgetown University Student Association (GUSA) petition urging the university to remove the large white tents on campus by the end of the Fall 2022 semester.

The tents — which currently stand in Red Square, the Southwest Quadrangle, Dahlgren Quadrangle and the Leavey Esplanade as well as outside White-Gravenor Hall and the Rafik B. Hariri Building — were originally installed to create more outdoor meeting spaces on campus during the height of the COVID-19 pandemic, according to Camber Vincent (SFS ’24), the speaker of the GUSA Senate. Vincent said GUSA hopes to use the petition released Oct. 27 to show student support for removing the tents to allow for more versatile use of outdoor campus spaces.

The petition calls for the university to share a detailed timeline for the removal of the tents and asks Georgetown to explore creating permanent, sustainable outdoor gathering spaces on campus in place of the tents.

“I think first and foremost, we’re a relatively compact campus. I don’t think Georgetown students realize it as much, but especially when you compare us with other universities, we’re a very, very compact campus. We don’t have as much green space as I think a lot of students would like, and we don’t have enough space for activities,” Van Slingerland told The Hoya.

Vincent said GUSA is advocating for the tents to be removed as soon as possible in part because of the environmental impact of winterizing them during colder months.

“They shouldn’t be winterized because winterizing them costs a ton of money and additionally uses propane heaters, which is really bad for the environment, both locally and in general,” Vincent said.

“All four grades are represented, all five undergraduate schools, people from all backgrounds, all ideologies, all experiences,” DiPierri told The Hoya. “It’s a very noncontroversial issue.”

GUSA circulated the petition on Georgetown GroupMe chats, Instagram and Flok, a social media platform that students can use to write anonymous posts.

Nate Schindler (MSB ’26) signed the petition and said he was interested to see how students’ voices impact the university’s decision-making.

“I think that’s what’s going to be interesting to see for my first look as a freshman, what the student body can actually achieve at this school and what our voices and how our voices can impact university decisions,” Schindler told The Hoya. “So having known about the stigmas about GUSA and whether or not it can be efficient, it’s going to be interesting to see for me if this gets passed.”

According to DiPierri, GUSA aims to include a student representative in all future discussions regarding the tents.

“One of the goals we’ve had over the past couple of months has been to kind of put student voice into the decisions around the tents,” DiPierri said. “Lots of students dislike where they’re located and what they represent, as obstructions in their day-to-day lives.”

A university spokesperson said that while the tents remain an important part of the university’s public health strategy, it is taking into account the tent petition as it makes a decision on the tent contracts.

“The use of tented spaces on the Main Campus and Medical Center has been an important part of our layered public health approach. The university continuously reviews the various public health, academic and space considerations related to tent use,” the spokesperson wrote. The University has received a student petition from GUSA and student signatories, and is reviewing the feedback as part of the ongoing tent-use consideration.”

DiPierri said the tents take up valuable space that can be used for better purposes.

“I remember the first week I moved in, when I was a freshman last year, they put the tent up for the beach volleyball court,” DiPierri said. “We were really disheartened that we couldn’t play volleyball on Southwest Quad. That space is so beautiful, and there’s very little green space on campus, and that tent really ruined it.”

Van Slingerland said removing the tents would allow students to make better use of Georgetown’s campus.

“We’re coming out of a very tough period in our lives right now, and we want to make the best of our four years in college,” Van Slingerland said. “So whether that be by having that beach volleyball court there in the Southwest Quad, whether that be by having more space for tabling in Red Square or just not having that visual obstruction there or being able to better utilize a space like the Harbin patio. The tents definitely hinder students’ ability to make the best of this campus.”