P!nk’s a rock star, and she doesn’t need or want you. She told you herself in her song “So What.”  Since her breakout single in 2001, “Get the Party Started,” P!nk has provided consistently entertaining and often hilarious in-your-face hits. She’s dissed the stupid girls, and she’s told those who’ve hurt her they don’t matter. That’s what makes her awesome; she’s the perfect artist to turn to when you’re fed up, done, pissed off, don’t want to deal and need someone who understands where you’re coming from. Been dumped? So what: You’re a rock star. Ladies night and that creepy older dude won’t back up? Ask the DJ to dedicate “U+Ur Hand” to your special man; he should get the message.

My first impression listening to P!nk’s new album, The Truth About Love, was that my kick-ass, ball-busting, lawn-mower-riding, underdog-anthem-rocking idol seemed downtrodden and heartbroken. The song “The Truth About Love” concludes that love is “all a lie.”

“Chaos & Piss” finds P!nk abandoned, hiding. In “Where Did The Beat Go?” she croons “How long is lonely supposed to last?” I wondered, “what happened to you, girl? Who did this to you?” I was longing for that spunk I’d come to know and love.

I found it on “Blow Me (One Last Kiss).” It’s her had-enough, back-up, self-praising anthem. Through lyrics like “I am sick, whiskey-dick, no more battles for me” and “You think I’m just too serious, I think you’re full of shit,” classically combative P!nk shines through. Her kickass spirit is back, yet that underlying sense of sadness is there.
P!nk’s new album is a fusion of witty, in-your-face P!nk, but with the heartbreak of Adele. This isn’t to say that P!nk has never written sad songs — there was “Who Knew” and “Please Don’t Leave Me,” both sad odes to lost love — but I never expected sadness to be a dominating theme in her work. This album is going to get a lot of girls through break-ups. They’ll sing, scream and sneer their way through each song with ease. But for the first time I find myself questioning if P!nk will bounce back from this one.

For all our sakes, let’s hope that’s a yes.  For now, P!nk rocks on through what appears to be her disillusionment with love, motivating herself and us with songs like “Try.” She sings, “Just because it burns doesn’t mean you’re gonna die. You gotta get up and try.”

I just hope that P!nk takes her own  advice and never feels like she’s less than perfect. It just seems like she needs a pep talk after this one. I’m not sure I can handle losing her kickass spirit.  After all, who else’s songs can I dance to when I’m in a bad mood?
Until her next album, this one will make due. Even rock stars are allowed to have bad days. 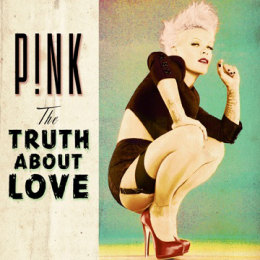