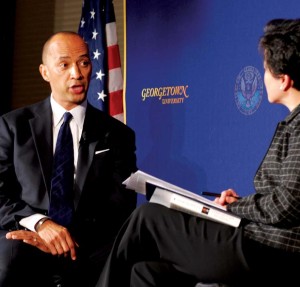 For years Byron Pitts found ways to hide his illiteracy. At age 11, he was diagnosed as functionally illiterate and placed in remedial courses at the start of fifth grade. Pitts was a “basement child,” educated with the seemingly hopeless in the basement of St. Katharine School in Baltimore.

The chief national correspondent for CBS News and a contributing correspondent for “60 Minutes,” Pitts was the featured speaker for the Master of Professional Studies in Journalism’s inaugural Newsmaker Lecture Series Thursday in Copley Formal Lounge.

“[Pitts] offers the Georgetown University’s community not only his media experience but also the wisdom of someone who has overcome nearly insurmountable odds,” Renata Sellitti, a MPS Journalism student, said in her introduction to Pitts’s speech.

Pitts discussed with a group of MPS Journalism students and distinguished guests the future of journalism, his career and his new book, “Step Out on Nothing: How Faith and Family Helped Me Conquer Life’s Challenges.”

“When I was in grade school and middle school, words like `slow’ and `stupid’ followed me around, certainly from classmates, occasionally from adults,” Pitts said. “I remember . when I became [one of] what was called the basement boys, where you would send kids who [had] either academic or behavior problems.”

Pitts has come a long way from being educated in the basement of his elementary school. As a chief correspondent for CBS News, he has reported on the wars in Iraq and Afghanistan, captured the scenes of Sept. 11 and the aftermath of Hurricane Katrina.

He recalled in one story how his faith helped him through one of his most dangerous experiences: a low-speed chase by members of the Taliban through the desert of Afghanistan. “As a journalist, you know . despite the craziness around you there is comfort [in doing your job]. And I looked at the scenery . and it hit me, the 23rd Psalm: `In the valley of the shadow of death I will fear no evil.'”

“One reason I became a journalist was because as a child who couldn’t read, I knew what it was to be voiceless; no one asked my opinion. My opinion didn’t matter,” Pitts said.

When asked what advice he would give to aspiring journalists, Pitts said the most important thing you can do is to find the truth in the story.

“Find an important story and tell it well . Always be honest because you are asking people to be honest to you,” Pitts said. “The world is getting smaller, and there are so many great stories to be told.”

Part of being successful as a journalist, he said, is to work hard and persevere during challenges.

“Strength only comes from struggle in life, and there [are] always things you can learn,” Pitts said of overcoming his severe stuttering problem. “It taught me to think before I speak, which as a journalist is a good skill to have.”

Graduate students in attendance were inspired by Pitts’s words and moved by the obstacles he accomplished on his road to becoming a chief correspondent.

“What stands out for me is . when he said he might not be the smartest person but works hard and does his work honorably. That we can do whatever we want, we just have to work hard,” Deirdre Bannon (GRD ’11) said.

Pitts is the first speaker in the Newsmaker Lecture Series presented by the MPS in Journalism program.

“Georgetown University offers students the opportunity to experience policy in the making and journalism at its best,” said Denise Li (GRD ’86), associate dean of the MPS in Journalism. “[The master’s program] is very much a hands-on program; students learn the craft from professional journalists, and they practice what they learn.” “