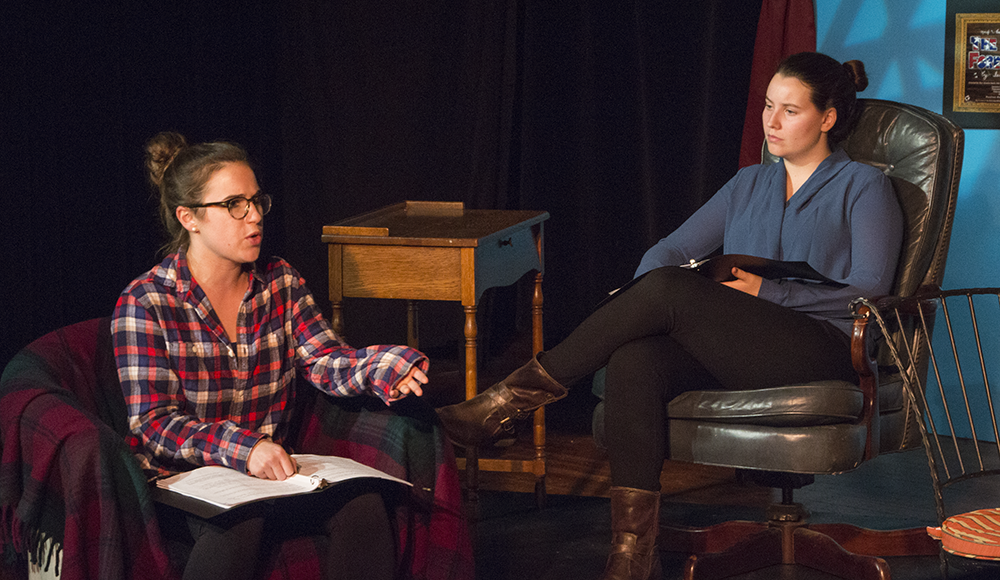 The newest production from Mask & Bauble Dramatic Society, the 35-minute one-act play entitled “Sonder,” is an experience rather than a show, a haunting portrayal of the reality of our own lives and our existence in relation to each other.

Written by Claytia Gonsalves (SFS ’15) and director Marlene Cox (COL ’16), the play, this year’s installment of the Donn B. Murphy One-Acts Festival, creates a world where society is deconstructed, all pretenses are removed and the characters are set free from the trappings of life to move in a space of truths, musings and rain.

There’s no real beginning — the actors start onstage in a cozy store reminiscent of Saxby’s or an M Street coffee shop, speaking quietly and browsing newspapers and menus. It’s an intimate yet distanced setting with people sliding by and fitting around each other, as if the audience is peeking in on the world of the pop song “Cool Kids,” playing softly and ethereally in the background.

So how can the play get beneath this projected exterior? With a line of people, each existing in his or her own bubble, dialogue bouncing back and forth as they finish each other’s all-too-familiar sentences. As the characters slowly melt into their respective places onstage, they settle into conversations exploring how they view themselves, pushing against the fuzzy edges of life that societal expectations seem to have created.

Big philosophical questions are sporadically interrupted with lighter remarks about Instagram, names and weather, and some of the dialogue is taken directly from discussions that the actors had during their rehearsal time.

“What I would do was interview the actors,” Cox said. “I don’t think they were super aware of that for a while, until I actually scheduled one-on-one rehearsals with them, where I said, ‘You’re going to talk, and I’m going to type.’ Most of our rehearsals weren’t acting-oriented at all; they were me getting dialogue from them and taking that and adapting it into some kind of script form.”

Because of this, the stage is filled with people we know, voices we’ve heard and experiences we recognize, punctuated by unexpectedly hilarious moments that keep the show grounded and familiar.

“We started with the prompts of names and nicknames, and then we moved onto prompts of facades, and masks, what we show other people, and what our names signify to us,” Cox said of writing the actual script. She had the cast play games, discuss heavy topics and undergo periods of introspection to create the personalities and the dynamics of the play.

The result is a playback of a slice of life in an average Georgetown student’s shoes, but its big questions and original poetry reveal snapshots of that life that we all tend to miss or fail to capture as we rush forward to classes or events. On this campus, it is easy to focus on material goals and the things that seem most impressive on a resume, but as the characters question each other and think aloud, they exemplify the ever-present disconnect between who we are and who we present ourselves to be.

“We know what our name represents to some people,” said Annie Ludtke (MSB ’18), whose own character struggles with a heartbreaking delicacy to make sense of how others see and call her. “But we have our own special personal definition, and that’s where your identity starts. We all talk about what it means to be us, not just what our name actually means, but what our name means to us, and how we live through our name or don’t.”

This theme of names begs the question of how you come to define yourself. Yet in teasing out the answer, the play refuses to come to any simple and concrete conclusion. In one single line, each actor shares his or her own name, and his or her own personal definition of it as related to how they see themselves and how they see the character they have created.

According to Tori Forelli (COL ’18), whose own four letter, two syllable first name becomes a character of sorts as she explores how she adapts to it and presents herself under it, this frank personal honesty is what makes the production so special.

“This is one of the most unique and exciting opportunities I’ve had as an actor in theater because I learned so much about myself. One of our prompts was to write a six-word autobiography, and I was like, how do you do that?” she said.

This show becomes less of a performance and more of a relationship with character that blurs the reality of life on and off stage, with our fellow Hoyas who are brave enough to reveal themselves under the masks of grades, school clubs, and expectations.
“That’s what we really circled around: having names and forming our identities, and how we break away from that,” Cox said.

The actors onstage are prophets and strangers, names and nicknames, you and me. Sitting back and listening to them recite poetry in an old cafe, for a moment you can feel yourself break from a Georgetown bubble that exists not only between the campus and the rest of the District, but also between each student and the way they present themselves to the world.
“Sonder” will be playing in Poulton Stage III this Wednesday through Friday, Nov. 19 to21, at 8 p.m., and Saturday, Nov. 22 at 2 p.m. and 8 p.m..