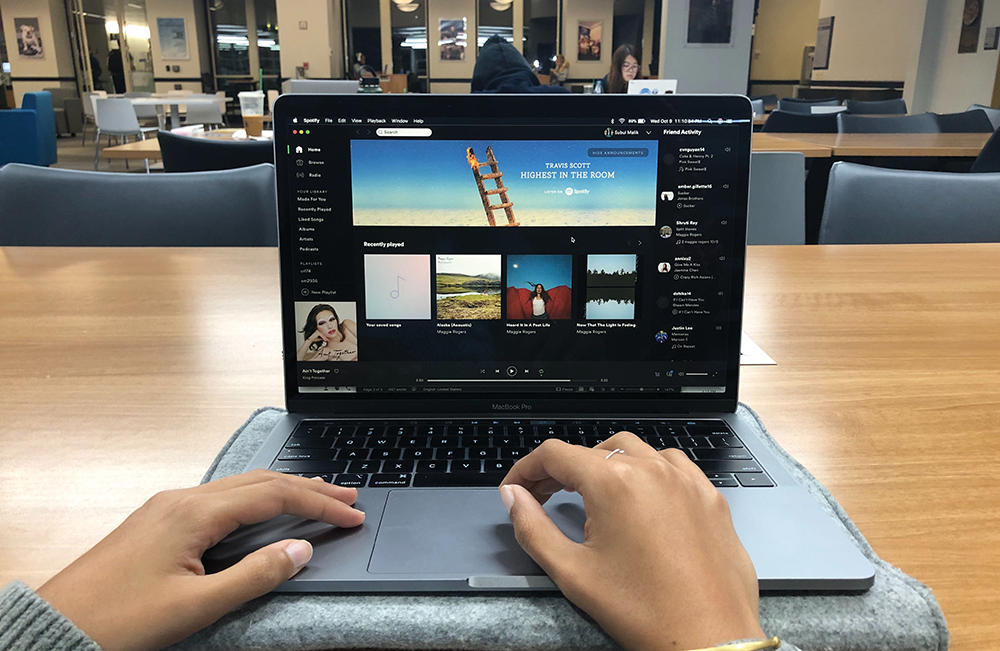 The snap of AirPods cases opening and shutting. The visible struggles of untangling headphone wires. The echoes of beats vibrating from portable speakers. Faint lyrics heard over the whirring of the coffee machine at Midnight Mug. Fingers tapping touchscreens, shuffling songs.

From Lauinger Library to the Leavey Center and beyond, everyone is walking to a different beat. Georgetown University’s campus has no shortage of people with their headphones in, plugged into their own smaller worlds of rap, indie, pop and rock — and anything in between. The ways students are listening to their tunes have drastically evolved from the mixtapes recorded and passed around decades ago.

With the advent of streaming, younger generations are shaping a new culture of music sharing. The industry is changing, and, as platforms like Spotify and Apple Music rise in popularity, students at Georgetown are embracing the freedom of expression, creating and sharing their own playlists that represent them. This modern form of music consumption is fostering community in an unprecedented fashion.

From Stereos to Streaming

The advent of the digital age has transformed the nature of music consumption. Gone are the days of recording the radio to achieve the perfect mix of songs, in favor of carefully curated online playlists. The music industry has evolved to further represent the changing times, said professor of music history Benjamin Harbert in an interview with The Hoya.

“The big crisis over sharing music started over cassette tapes,” Harbert said. “You’d record one song and then hit stop or pause and pop that out and put another song on, or a lot of times it would be taping things from the radio. But it was all linear and it was all limited to a certain amount of time.”

As technology progressed throughout the 1980s and 1990s, recording the radio began to be replaced by burning CDs, according to Harbert.

“CDs came out and they just sounded better than tapes, and so a lot of people moved over to CDs,” said Harbert. “There was a big push by the record industry to move over to CDs as well — they could make more money off of it.”

In 2019, streaming platforms like Spotify and Apple Music have long outpaced cassette tapes and CDs. According to the Recording Industry Association of America’s “Mid-Year 2018 RIAA Music Revenues Report,” 75% of music revenue in 2018 came from streaming platforms, with traditional album sales lagging behind at only 22%.

Streaming music services have offered a new avenue for music exploration and encourage a more casual listening environment, according to professor of music Anna Celenza, who spoke to The Hoya in an interview.

“I think streaming has made us aware of a much broader repertoire and exposed us to a lot of things,” Celenza said. “And it doesn’t cost you that much.”

Streaming platforms now boast over 220 million active users across the world, with more than 140 million of those users being paid users. As these streaming services continue to expand their user base, their influence over music consumption will only continue to rise.

Streaming allows and encourages users to discover new music, especially through features like Spotify’s Discover Weekly playlists and personalized Daily Mixes based on users’ current activity and streaming habits. Nickie Demakos (SFS ’21), who uses Spotify frequently, spoke about her own playlists and the social aspects of the platform in an interview with The Hoya.

“I feel like, before, it was really hard to find new artists, and Spotify has shed light on up-and-coming artists,” Demakos said.

For students using a streaming service, accessibility to a wide variety of music is one of the most important factors in platform choice. Just having a music catalogue on their devices and ready at their fingertips is reason enough for some to switch to streaming.

The shift to streaming, however, falls short of providing a living wage for smaller musicians, according to Celenza. Streaming services pay out anywhere between $0.0006 and $0.01284 per play, which can require millions of plays to offer a pay level equivalent to that of the United States’s monthly minimum wage.

For some, this lack of money going directly to their favorite artists can encourage them to support them in other ways. Concerts, merch or anything in between are alternate ways to support a favorite artist, according to Maya Cassady (COL ’23), who uses Spotify, in an interview with The Hoya.

You Are What You Play

From streaming platforms like Spotify and Apple Music, a new artform is emerging: playlist curation. Where there used to be constraints — listeners limited to the dozen tracks on an album or the familiar riffs of the same genre — a movement of acoustic personalization has been born.

The process of curating the perfect playlist requires a number of factors. While some playlists may stick to particular decades, musical styles or artists, other students have truly explored the potential of the platform with bold experimentation and eclectic mixes through their playlists. With the freedom to reconcile genres as diverse as 1980s disco funk, 2000s dream pop and a touch of modern trap, no combination is too out of the ordinary.

A song’s fit on a playlist and how it captures the mood of an event is one of the most important aspects of playlist curation, according to Peter Hunziker (MSB ’20) in an interview with The Hoya. The art of playlists allows for creative expression, which can take different forms in either trying to match the energy of an event or in offering something for oneself.

“For my playlist ‘cookin in the kitch,’ if I’m actually cooking, I don’t really want EDM bangers. I want chill music. If I want to be amped up, I have playlists for that, too,” Hunziker said. “If I’m making a playlist, I’m always asking, ‘Okay, what’s our vibe tonight?’”

Some playlist curators, including Harbert, can see their creations as important documentations of their most cherished personal moments and connect their treasured memories to a specific set of songs.

“There’s one that I created for when my son was born. It has like Iron & Wine, Bonnie ‘Prince’ Billy, Civil Bear, Sufjan Stevens,” Harbert said. “It’s just gentle stuff, but it has significance. So we kept it because we associate it with that time.”

Taking the time to conscientiously curate songs, Demakos, like many other Spotify users, considers this new and novel way of self-expression and an integral part of who she is on campus. Demakos spoke about  her “gtown 1-4” playlist, which gathers the songs that she feels encapsulate and continue to mark her years as a Hoya.

“It’s like a journal, but with music. It’s my college experience in a playlist,” Demakos said.

In the same way a portrait hangs in an exhibition, each playlist marks itself an invaluable creation in the museum of an individual’s life. Hidden in the minutes of a dozen songs are people’s stories and how they share them with the world.

As it continues to grow in popularity, Spotify has joined the ranks of other social media giants as an outlet for users to share snapshots of their lives, with a layout and interface that highlight the communal act of listening to music by allowing you to easily publicize your current activity.

Spotify’s social media function allows for these connections to be made and people to discover new music that their friends are listening to, according to Demakos.

Spotify also allows for the creation of collaborative playlists, allowing multiple users to add songs to the same playlist. This collaborative function allows users to share their music as a communal experience and connect with one another in new ways, according to Hunziker.

“We made a collaborative playlist for our summer trip,” Hunziker said. “Everyone was adding stuff; it was so great. One friend added this super random song, but it actually ended being the anthem for the trip — and our friend group.”

Spotify’s evolution as a social media is tied to the rise of social media as a platform. The impulse to share and post fuels activity on all of these predominant platforms, and Spotify is no exception, according to Celenza.

Where radio used to provide a sense of community that some feel borders on conformance, Spotify promotes exploration into a wider and more diverse range of music through personalized playlists and the ability to see what artists other users love.

The aspect of human interaction on the platform provides the social framework that keeps users engaged, according to Harbert.